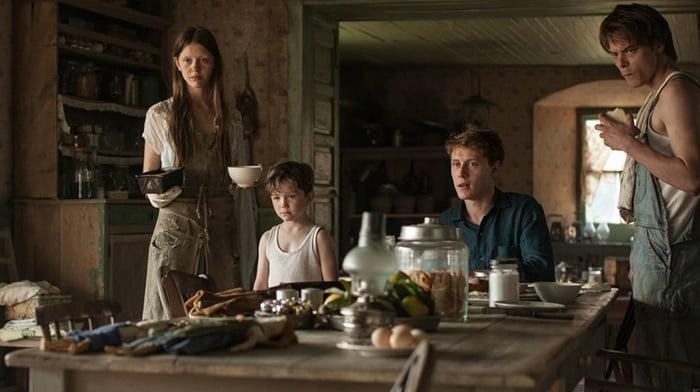 Somewhere in some secret movie exec roll-a-dex is a coffee stained card containing an algorithm for creating fringe horror concepts to fill the never ending supply of the grocery store DVD bargain bins. That card was dusted off recently to at least assemble Sergio Sánchez's debut feature, Marrowbone; a slow-burn family chiller combining a flurry of shiny cinematic tools, but lacking the heart and soul to make its spooky aspirations come to life.

The formula here goes: spooky house + family secrets + Anya Taylor-Joy + Charlie Heaton - genuine scares = X. Joy's role is fairly small, while Heaton plays one of the Marrowbone children, a trio of loners who fled to small town America to escape their dangerous abusive murderer of a father and the stigma that comes with being his children. When their mother dies, they keep her death a secret in fear that they will be separated. Meanwhile, a dark presence threatens to pull them apart all the same.

George MacKay leads the family as Jack, who strikes up a hushed romance with Allie, played by Joy. What transpires over the course of 110 minutes is mostly a family drama, though Sánchez sprinkles in some spooky ghost shenanigans here and there through the youngest Marrowbone, Sam (Matthew Stagg). Having worked on The Orphanage, Sánchez clearly learned a thing or two about creating a stark set as the house often acts as a character in and of itself through the cinematography. Yet no  amount of staging can distract from the fact that even with as much time as we spend with these kids, the characterization just isn't there. As a result of the thinly written characters the immediacy of the ghostly deeds is lacking, while also leaving the drama to fall flat.

The aesthetic of a tried and true ghost story alone is not nearly enough to save Marrowbone from being its own worst enemy. Sanchez's deft eye for cinematic framing opens the door to the audience to become engrossed with what's happening on screen, but so little transpires in the artfully prepared shadows that it's psychological hold is weak. Few times will the audience ever feel a sense of true danger lurking in the dark and all your left with is the sibling bickering, generic love story, and transparent secondary antagonist in the form of an actor, Kyle Soller, who may as well have been billed as Mean Bank Representative 1.

When the dust settles on the creeky floors of the Marrowbone estate, Sánchez's film is nothing genre fans haven't seen countless times before though boasting serious visual chops.