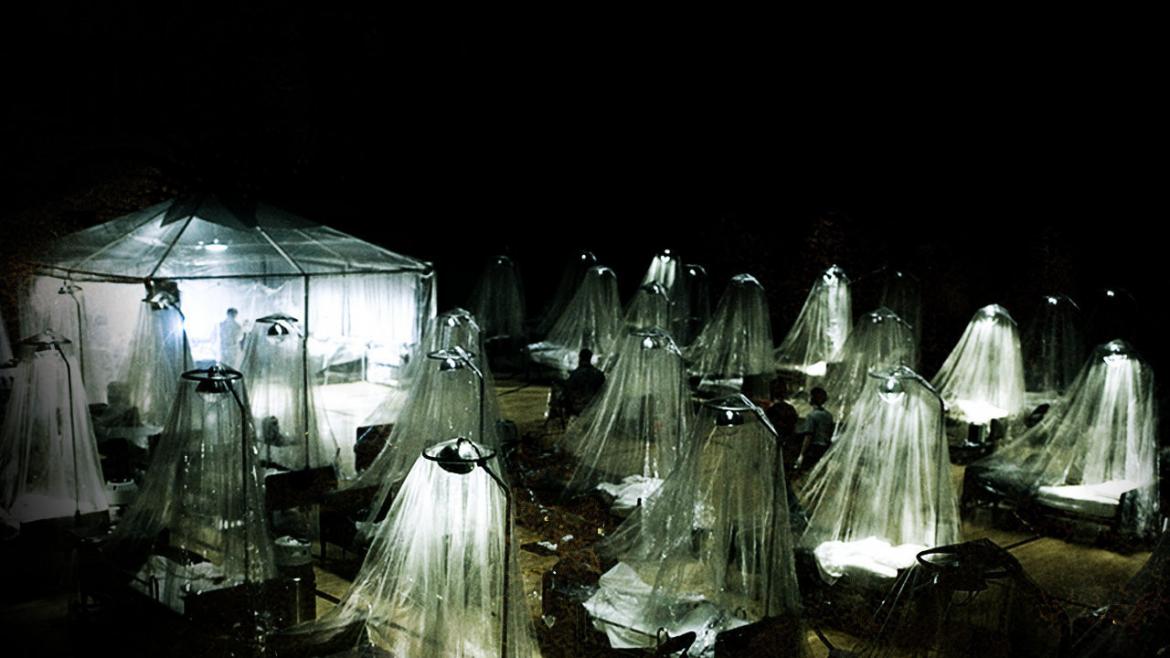 Carriers plays a neat trick – it's a zombie film without zombies.

Danny (Lou Taylor Pucci) and Brian (Chris Pine) are two brothers on a road trip to the beach where they vacationed as children. Along for the ride are Bobby (Piper Perabo), Brian’s girlfriend, and Danny’s friend Kate (Emily Van Camp). For all intents, this is a road-trip movie and if it were a comedy, it would be all about how shy, nerdy Danny learns a little something about self-confidence and gets his best friend to fall for him, all while reconciling with his estranged, blue-collar brother. All of those plot threads are there and all of that background is established pretty quickly, but what might otherwise be a fun road trip ends abruptly when they find the road blocked by Frank and Jodie, a father (Christopher Meloni) and his young daughter looking for gas. Brian’s rules preclude helping them, especially once they see that Jodie is sick, and they callously drive on. But when their car breaks down, the quartet is forced to partner with Frank and his infected daughter to find a facility where there is a cure for the plague causing the dead to rise. Much like a road trip comedy, the film follows an episodic path along the driving route: new location, new characters, zany complication, though each of the zany complications tend to end with somebody dying.

While most zombie films focus strictly on survival, “Carriers” questions what survival costs. It’s consistent isolation becomes more and more confined until you realize that the real horror in a zombie apocalypse is simply being alone.

Focusing as explicitly as it does on humanity and not undeath, there is something starkly, psychologically unsettling about the film and its unflinching portrayal of just how quickly everyday people can become monsters. Most zombie movies use the shamblers as metaphors for this, but “Carriers” hits us with that uncomfortable truth head-on.

“Carriers” is a taut, spartan film. It’s bleak enough to make “The Walking Dead” look like Zack Snyder’s “Dawn of the Dead” remake. Still, the Pastors are good at capturing the tension and human drama that is the core of any zombie story, and they are able to do more on a lean budget than most low-budget horror fare. Fans of the genre - especially of the more esoteric zombie fare like “Pontypool” - should definitely give “Carriers” a try.