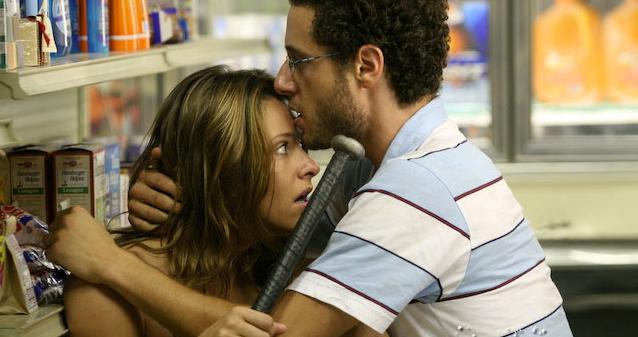 "Splinter" hits DVD at an odd time, when a whole host of solid limited release horror films are also hitting store shelves, so it would be easy to overlook it when you're out searching for your horror fix on a Friday night. That would be a mistake, because if you did that you would be missing out on a fantastic gem, and a great example of what can be done on limited resources.

The film starts with a young couple going camping in the woods. As they pull over and start setting up their tent for the night, we begin to see their personality traits right off the bat. Seth ("American Pie's" Paulo Costanzo) is a bookish, passive biology PHD with a strong aversion towards all things "outdoors". His girlfriend Polly (Jill Wagner) on the other hand, is a strong tomboy who clearly wears the pants in the relationship. Like a lot of modernized, city-dwelling men, Seth doesn't know how to drive a stick-shift and as we find out in the very first scene, set up a tent, either.

After user error causes a tear in their sleeping quarters, Seth wins out and convinces Jill they should drive down the road and look for a motel. The steamy "anniversary sex by star-light" will have to wait until next year. After a few minutes of driving down the road they run into Lacey and Dennis, and this is where their fortunes take a turn for the worse. Lacey is a tweaker, coming down off of her drug of choice and unhinged to the max, and Dennis is her alpha-male, convict boyfriend. The two are heading South of the Border to escape Dennis' past, where they plan to make a new life together. They intend to do so by hijacking Polly's car, and taking the couple hostage.

They don't make it very far before slamming into a particularly nasty piece of roadkill, that after some examination seems to display some very strange behavior... ie moving and lurching towards them even though it's quite clearly been blown to pieces by the collision with the car. These scenes are intense, with teeth-clenching tension between both our polar-opposite couples, and the mounting threat from the outside that we know is right behind them. Finally back on the road, the engine overheats, causing them to have to stop at a nearby gas station. This is the point where they run into their first "infected" body, and let's just say that all hell breaks loose from there.

"Splinter" succeeds where so many similar, low-budget films fail, by squeezing incredible tension out of small, potentially insignificant setups and a very limited cast. Director Toby Wilkins shows a deft hand at creating suspense, and an understanding that excitement can be built with almost any setup, as long as it's presented correctly to the audience. This makes the picture tense from beginning to end, and keeps you waiting with baited breath to find out what will happen next. So few films achieve that nowadays, it's crucial to praise one when it does.

In many ways, "Splinter" can be thought of as a mashup of "The Thing" and "The Mist", two films that any director would be proud to have his film compared to. At its heart it's about people, and the way they react in extreme situations. It sets up character stereotypes which inform their relationships', but by allowing each character the ability to rise above and act contrary to their predestined roles, it bestows on them a very realistic sense of humanity. Seth isn't necessarily tied to his impotent, modern domesticated-male role, and for all of his bluster, Dennis turns out not to be as threatening as he puts on. The balance is crucial to the success here, as is the fantastic performances turned in by all present.

Much is made by horror fans of the over-abundance in the last decade of what we'll call "redneck horror". There's only so many times you can watch a mutant cannibal family from the South stalk and kill a group of "city folk" just because. What "Splinter" proves, is that there are still interesting ways to explore the dichotomy of those two cultures, but without demonizing or over-stereotyping either side. It's a refreshing take on cultural relations that was highly appreciated. While most horror films ultimately devolve into the cliche "man is his own worst enemy" tropes, the human protagonists in this film ultimately team up with the villains and fight together to try and survive. It's a positive, interesting take on the "humans in peril" scenario.

The icing on the cake has to be the fantastic practical effects. The parasite in "Splinter" is transmitted though tiny, porcupine-like "spikes" that protrude from wounds that have been infected. Once a host has been taken over, it constantly seeks out new flesh to feed on, all the while twisting and contorting while bones snap. The longer a host stays infected, the more twisted up the creature becomes. These are the moments when the film begins to strongly resemble John Carpenter's "The Thing". It's also clear that like Carpenter's classic, almost all of the effects were done practically, with only a few noticeable CGI shots to speak of. Again, another way that "Splinter" acts as a breath of fresh air in modern horror cinema.

"Splinter" sports a very tight script, with few leaps of logic and a satisfying ending. I can't imagine that it popped off the page too much in written form, but Toby Wilkins brings it to life with some fantastic direction. Add to that some great performances and killer monster effects and you have yourself a very solid little horror film. Watch it alone or with some friends, but just watch it. Trust me.