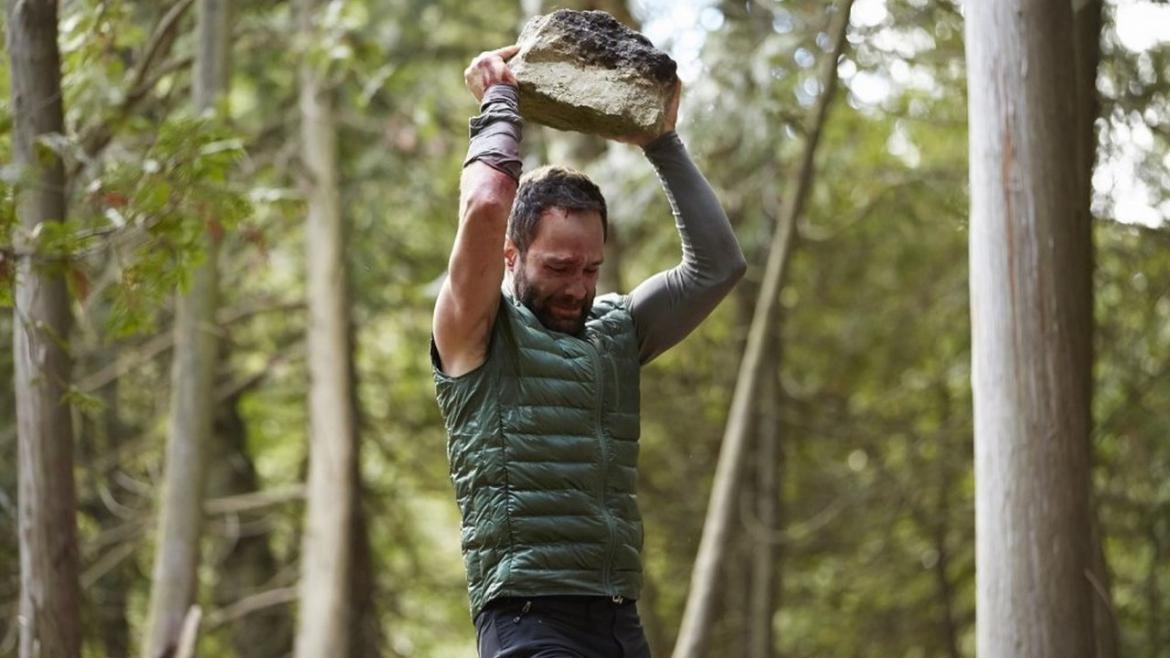 Soon I'll get to actually reviewing Man Vs., but first, a confession. While others chose to spend their Friday evenings in college during the mid-2000s grooving to Usher (featuring Lil Jon and Ludacris) or The Pussycat Dolls at a house party or bar, this reviewer could frequently be found in the company of good friends and one Les Stroud, a.k.a. “Survivorman.” As such, the antics of Stroud – and his more charismatic (and more British) survivalist compatriot, Bear Grylls – remain a nostalgia-addled guilty pleasure.

What does that have to do with Man Vs.? Well, in the film, Chris Diamantopoulos – the “this guy (forks)” character from Silicon Valley  – plays Doug Woods, a “lone wolf” survivalist cut from the same cloth as a Stroud or a Grylls. Woods’ career is on the upswing as some vaguely defined big network has taken an interest in him and sent a whole bunch of money his way. Tensions are high for Woods and his production crew (so he’s more of a “not really alone” wolf) as they journey into the Canadian wilderness to hopefully kick off their best season yet and earn more of those sweet, sweet dollar bills. What they encounter in those woods is something for which no amount of survival training could have prepared them.

On the surface at least, Man Vs. appears to be genuinely fond of the sub-genre from which it has drawn its inspiration. For much of the film, the narrative plays out as essentially an unedited version of a Survivorman episode. Not unedited in the “too extreme for TV” sense, but rather the “I’m going to shoot a lot of footage and at least half of it will be unusable, but whatever.” We get more than enough bloopers and re-dos and shots of a guy just hanging out in the woods. Really, Man Vs. is pretty weak horror-cred-wise outside of a few cliché setups until the third act, at least. After spending two acts keeping Woods’ antagonist hidden, director Adam Massey abandons this strategy and just goes for it, unleashing some delightfully hokey CGI during an admirably, ridiculously bananas conclusion.

Those without a fondness for “guy trapped (but not really) in the woods” programming may not take as much joy in seeing that sub-genre given the old horror twist in Man Vs. Those who relished watching Stroud and Grylls push themselves to the limit, however, should get a moderate kick out of seeing the experience born anew as a horror flick, thanks especially to a devil-may-care climax and a sturdy leading turn from a great character actor in Diamantopoulos.