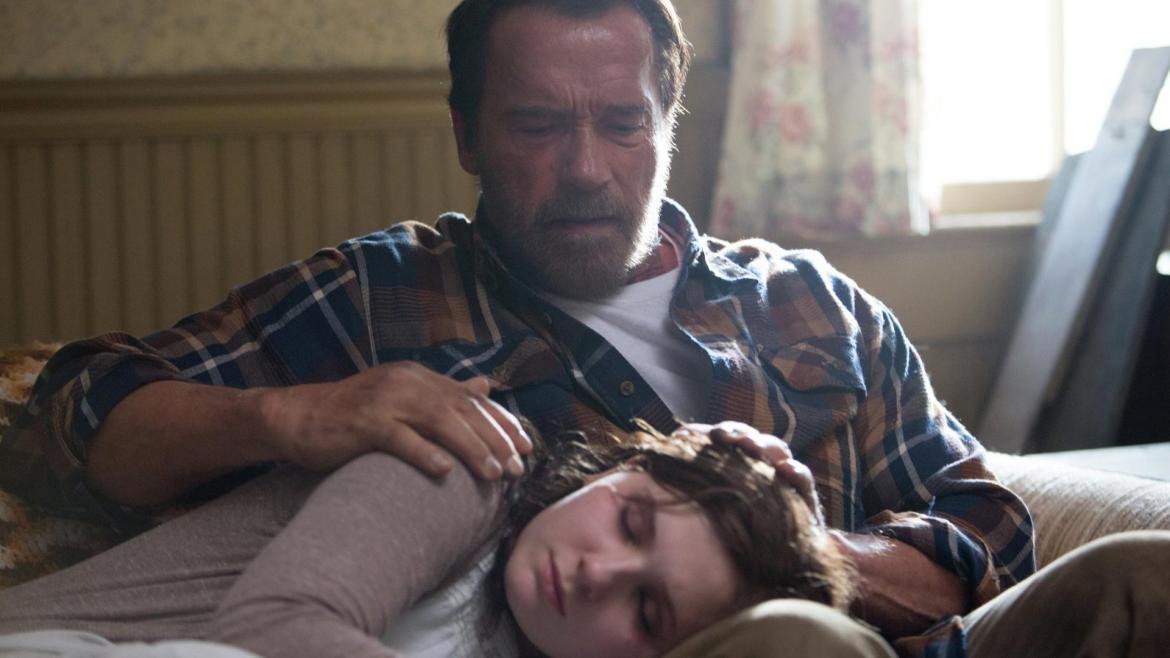 By the time we enter the world that Henry Hobson has built in Maggie the world is on its way to recovering from the zombie apocalypse (is it still an apocalypse if there's a recovery?). Despite the world being on the mend there are lingering horrors. Crops are involved in the outbreak, so whole fields are razed. Worse, however, is the fact that there are still individuals that have been infected, and there is no cure, so the only solution is eventual quarantine. At the start of the film Wade Vogel (Arnold Schwarzenegger) is searching for his daughter, the titular Maggie (Abigail Breslin), who's run away from home because she's been bitten. He finds her at a hospital, where she's released into his custody with the understanding that he is going to take her to quarantine as soon as she reaches the advanced stages of the disease. Once Wade gets Maggie home, he and the rest of the Vogels have to struggle with how to deal with the inevitable degradation of Maggie's health.

Most zombie films deal with the macro reality of existing in a world that is falling apart due to an outbreak. Maggie focuses on the micro reality of knowing that a loved one is going to die, become the undead, and then mindlessly try to eat anyone in their path. Do you send them to quarantine when you're supposed to, which is presented as a horrible fate? Do you protect them until they completely turn, and then continue to do so after that to the best of your ability? Do you put a bullet in their head? These questions are at the heart of the struggle we see Schwarzenegger going through here, and he does an incredibly adept job. Much has been made of the fact that Maggie presents a new side to Schwarzenegger. I don't know if that's necessarily true. His filmography is dominated by relatively light fare, but he has done good dramatic work before; it's just been in films that haven't exactly gotten the best reception, such as End of Days. While Schwarzenegger's performance has been getting a lot of press, the performances in the film are pretty stellar all around. Breslin especially gives a crushing portrayal of a young girl confronting her mortality.

While the performances are all great, the film still has some major problems. The biggest of these issues is the fact that the narrative eventually collapses underneath the weight of its contemplative pacing. For most of the film it's a strength. The way the camera lingers on scenes and allows the performances some air is a welcome change from the norm. Eventually it just seems like the filmmakers couldn't decide for themselves what the implications of all that contemplation were. It's a shame, because there's a great film in here somewhere.