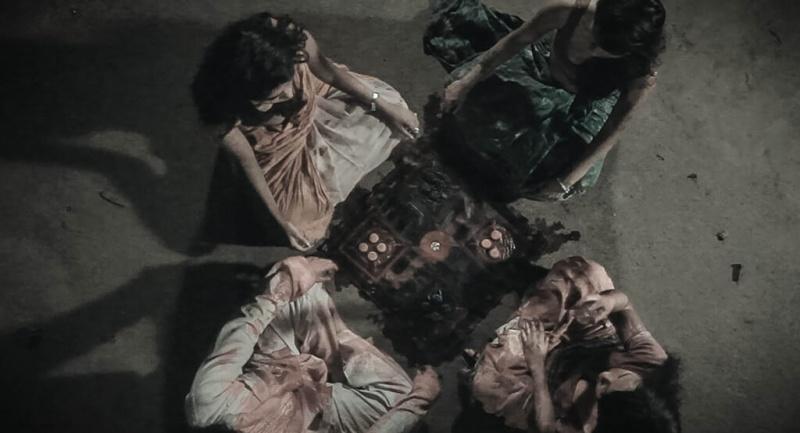 Do you have a burning desire to watch an Indian horror movie? If so, Ludo theoretically fits the bill.

Directors Qaushiq Mukherjee and Nikon bring to the screen the story of two teenage couples trying to find something to do in the city. They have drinks, eat some food, and ride around on mopeds trying to find a hotel to stay in. But some cops harass them and take their money, leaving them unable to afford a room. They decide to go to a local mall and stay until after closing time, allowing them to run around and do whatever they like undisturbed (even though malls in India look just like the ones here, there are apparently no security guards to keep people out after hours). Then, things get weird. A bizarre old couple shows up and forces the kids to play a board game with them. The result is some cannibalism and a ton of exposition.

Ludo isn’t terrible. Though the actors don’t speak English, they seem to be convincing in their roles. There are some good special effects once things get going, with the standout being a nice nod to Mola Ram holding a still beating heart in Indiana Jones and the Temple of Doom (I assume this was an homage, anyway). The major problems are pacing, editing, and a strange shift in tone and focus. Much like a bad Saturday Night Live skit, scenes go on way too long. This is a 90 minute film that could have easily had half its run-time cut. And the first two acts are all about the teens, but the last thirty minutes or so involve the cannibal/vampire woman explaining the entire history of the evil board game and the people involved with it. This doesn’t move the story forward at all - it grinds it to a halt - and could easily have been done in a two or three minute flashback. It also leaves the viewer with as many questions as it answers. Despite all this time spent discussing the game there is absolutely no mention of the rules and how or why it turns people into immortal creatures. Если тебе нравятся светленькие девушки, то обязательно переходи по ссылке и смотри порно русская блондинка . Здесь эти ненасытные давалки вытворяют такое, что твоя девушка даже обсуждать не согласится.

This is the only horror film I've seen created by an Indian crew and starring Indian actors, so I don’t know how it stacks up to other genre works from that country. It’s not poorly made and it’s a decent idea, but it’s stretched way too thin. The same story as a twenty minute section of an Indian anthology would have been enjoyable, but at 90 minutes, most Westerners will be reaching for the fast forward button on their remote.