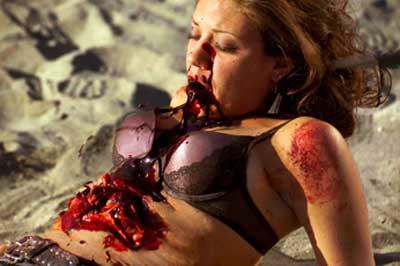 It's official: Mark and Eric hate me. Why else would they subject one of their dedicated writers to the crusty cinematic discharge known as “Neowolf” (aka "The Band From Hell"), a film so poorly-executed that its director chose to exclude his or her name from the credits. The DVD packaging purports that Alan Smith directed the project, though the credits list the filmmaker as Alan Smythe. IMDb, meanwhile, proclaims the helmer to be Alan Smithee, which, of course, is the world-famous pseudonym for someone who is so embarrassed by their creation that they’re unwilling to take responsibility for their actions. After subjecting myself to its charms, it’s easy to understand why Yvan Gauthier doesn't want his named attached to the production. Whoops!

“Neowolf” is a terrible film from the first frame to the very last. Not even the allure of genre vixen Tiffany Shepis’ well-rounded ass could salvage this unwatchable mess from the depths of despair. It’s poorly-directed, pathetically written, and, worst of all, unshakably boring. You’d think that a motion picture which borrows heavily from Joel Schumacher’s 1987 classic “The Lost Boys” would at least be marginally entertaining, but, of course, you’d be wrong. Dead wrong. Rarely have I encountered a motion picture that generates this much unchecked anger and animosity, Uwe Boll films notwithstanding. Although I consider myself to be fairly unflappable, I do have my limits.

The picture follows the adventures of Tony, a wannabe rock musician who thoughtlessly ditches his curvy girlfriend Rosemary in order to obtain the proverbial fortune and glory. However, all of the success in the world couldn't squelch the untamed desire he has for this collegiate sexpot, and before long, he realizes the mistake he's made. With the swagger of a guy who honestly believes his bowel movements to be golden gifts from the fecal Gods themselves, Tony makes his triumphant return, though his advances are initially spurned by the love of his life. All of his past transgressions are forgiven, however, when he delivers a quasi-romantic power ballad during an open mike session at a local watering hole.

Also in attendance for Tony's heartfelt performance is the eastern European metal band Neowolf, a multi-cultural collective of homoerotic musicians who just so happen to be bloody-thirsty werewolves. Eager to fill the vacancy left by their dearly departed guitarist, the band quickly accepts Tony into their fold, a process which includes an impromptu indoctrination into lycanthropy. Rosemary, distressed by her soul mate’s venture into the seedy underbelly of the werewolf metal scene, decides to take matters into her own hands. With the assistance of a shotgun-wielding botanist (Veronica Cartwright), Rosemary sets out to rescue her beau from the clutches of unspeakable evil.

I apologize profusely if my lengthy description of “Neowolf” mistakenly portrays it as something you might be interested in watching. Trust me on this one -- it’s not. The film is a skid mark on the underwear of horror, a pulsating pimple on the backside of cinema. The script wanders aimlessly through one cliché after another, forcing its youthful cast to partake in a number of increasingly insipid scenarios. Combine the director’s overall lack of talent with some remarkably unattractive special effects and you’re left with something I wouldn’t wish upon my worst enemy. Are we really expected to believe that the finale takes place at night? Please.

Generally speaking, I can find a few positive things to say about any movie I watch, but "Neowolf" is one of the few exceptions to that rule. To be honest, I'm not sure what I've done to deserve such pitiful treatment. Is this my punishment for not attending HorrorHound Weekend? Did I say something in a previous review that rubbed my editors the wrong way? Watching shirtless guys with patchy hair chase half-naked co-eds through the desert might sound like fun to you, but it's unbearable punishment for me. So thank you, Mark and Eric, for allowing "Neowolf" to find its way to my doorstep. I can't wait to throw it away.