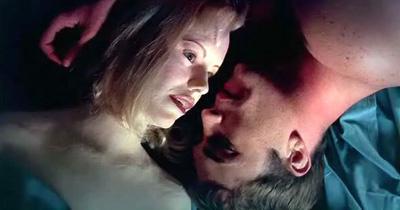 RTFM. From the perspective of a technical writer who has dedicated his life to writing the F-ing M, that’s the answer to all your problems so you should really stop complaining about all those PC LOAD LETTER messages and just dig the instruction manuals out of the trash and follow them for once and for all. Unfortunately for that hapless technical writer (as well as Oprah’s book club army), matters of the heart can’t be boiled down to bilingual directions with helpful step-by-step illustrations. Real life is messy and often ends in frustration and learning to live with a blinking 12:00. You might be able to find a partner who comes with an instruction manual but it’s going to set you back a few grand and most, if not all, of your self-respect.

Luckily, a dearth of self-respect isn’t a problem for technical writer Kenneth Winslow. He’s a sad-sack stuffed suit who is used to being taunted by his co-workers and yelled at by his boss (played by master yeller Rip Torn) on a regular basis. Kenneth has a crush on Melissa, the new temp, but he’s far too pathetic and timid to ever act on his feelings. Instead he visits a website that lets him customize and order a silicone love doll that is the spitting image of Melissa. That is, except for the blank eyes and that whole “uncanny valley” thing. But hey, it’s anatomically correct. What more could he want?

At first Kenneth is enamored with Nikki, his new love object. He dances with her, buys her clothes, and even gladly suffers through “The English Patient” with her, wiping the imaginary tears out of her dead, unblinking eyes. It’s a match made in creepy pervert heaven until a funny thing happens. Flush with the confidence that is born from having a beautiful woman waiting back home in a shipping crate, Kenneth finds himself not just talking to Melissa, but actually hitting it off with her. Before they know it, their fledgling romance blooms into a full-on montage which ends, in typical montage fashion, with some heavy petting on Melissa’s sofa. The reality doesn’t quite match up with Kenneth’s fantasy, though, when he finds inconsistencies like Melissa’s pierced tongue or hidden tattoo. In the end, the guilt proves to be too much and Kenneth finds himself unable to go through with cheating on his plastic love doll.

When Kenneth begins waking up handcuffed to Nikki and receives postcards that appear to be from her it becomes too much. The two go through a bad break up that involves an electric saw and the bathtub, which arouses the suspicions of the nosy apartment manager next door, played with foppish sophistication by Udo Kier. Now Kenneth seems to have the Nikki situation under control but he has Udo Kier sniffing at his heels and a real life girlfriend to deal with who most definitely doesn’t come with an instruction manual.

While “Love Object” is a perfectly entertaining movie, its biggest flaw is the major tone shift that comes in the third act. The first hour of the film is a quirky dark comedy that leans heavy on the satire and goes almost exclusively for laughs over scares. There’s a point in the film when Melissa discovers Nikki and the film almost immediately shifts into something approaching torture porn. Since Kenneth has alternated between being pathetic and sympathetic for most of the film it’s a bit abrupt to see him go from being a comic protagonist to an outright villain. The ending goes even further into dark territory in a way that feels a bit unearned. I’ve got no problem with the dark and disturbing movies but here the third act feels more like a dirty trick or a bait and switch. The movie gives every indication of being a dark and slightly perverted romantic comedy and then pulls the rug out from under the viewer by shifting into something else entirely.

Despite the inconsistent ending, there’s still a lot to recommend “Love Object”. It would pair up nicely as the gender-swapped back half of a double feature with Lucky McKee’s “May” and even though they don’t get a great deal of screen time, it’s a joy whenever Rip Torn or Udo Kier pop up. Go ahead and prop your significant other up on the sofa, lay your head on their surprisingly lifelike shoulder and enjoy “Love Object” the way it was meant to be enjoyed - with someone special.