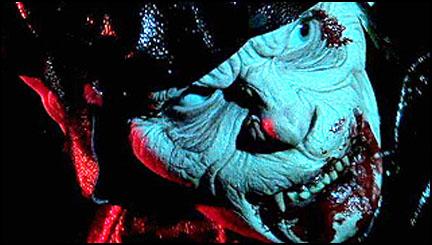 As I continue my valiant slide down this grue-encrusted chimney I call Christmas, I feel the inexplicable need to burn my beautiful bottom on a motion picture most people probably haven't taken the time to get know properly. Something a little off the proverbial beaten path, a film that probably looks much, much better through eggnog-colored glasses. Seeing as it's the season for giving and sharing and sending out colorful cards to people with no redeeming qualities whatsoever, you can consider this timely article my gift to you, our faithful readers. I would've sprung for something a little smarter and a lot flashier, but to be perfectly honest, you're kind of hard to shop for. No offense.

David Thomas Sckrabulis and Jamie Nash's 2006 holiday horror epic "Two Front Teeth" is one of the kookiest Christmas-tinged genre outings I've watched all year. Despite its obvious lack of production funds and its cheap, shot-on-digital aesthetic, the picture is easily the most entertaining of the bunch, and it proves once again that all you need to make a quality film is a good script, a group of able-bodied actors, and fifteen metric tons of uncut ambition. What the picture lacks in polish it makes up for with clever dialogue, some impressive effects work, and a finale that pits the All-Mighty Santa Claus against the vampiric Clausferatu. Yes, you read that correctly.

The story follows the campy, light-hearted exploits of a podunk investigative journalist, his adulterous wife, and a reclusive stranger who knows the deadly truth about Christmas Day. From what I can gather, the aforementioned characters are endlessly tormented by a legion of sadistic elves in S&M garb who want nothing more than to reclaim Rudolph's disembodied nose for all sorts of nefarious purposes. Tagging along for this blood-soaked thrill ride is the journalist's mentally unstable editor and a trio of sword-swinging, spin-kicking nuns who want the nose for themselves. Gunplay and seriously goof martial arts are aplenty.

Naturally, those of you who simply cannot stomach the sight of microbudget movies should probably leave this one alone. “Two Front Teeth” may be a hoot, but it doesn’t look like much from a technical standpoint. The editing is occasionally erratic, the direction is questionable, the computer generated nozzle flashes are poorly executed -- typical problems for a production of this nature. That being said, Nash and Sckrabuli do an admirable job of keeping your attention away from the cracks in the cinematic foundation by constantly assaulting you with corny Christmas-related one-liners and lots of silly action.

Of course, you can't discuss "Two Front Teeth" without saying a little something about the film's star, one Johnny Francis Wolf. In addition to resembling like a jaw-droppingly eerie amalgamation of Talking Heads frontman David Byrne and the late Christopher Reeve, the guy's delivery of several memorable lines couldn't be more peculiar. I'm not sure if all of this nervous energy and whip-smart timing was intentional or not, but it certainly adds to the picture's bizarre charm. You can't help but smile whenever its Wolf's turn to speak, even if the dialogue he's spewing is less than impressive.

Kudos to David Thomas Sckrabulis and Jamie Nash for delivering the kind of quirky, absurdist action/horror hybrid that never once breaks its stride or takes itself too seriously. Are there better Christmas-oriented horror films than "Two Front Teeth?" Of course there are. However, I doubt any of them are as memorable or as completely unhinged as what we're dealing with here. The colorful mix of comedy and gore is well-balanced and delightful, especially if you like your humor violent and extremely stupid. And while the technical sheen may not be as accomplished as I'd hoped, it's easy to forgive the film its shortcomings when the filmmakers are so eager to keep you entertained. It may not be pretty, but it works.