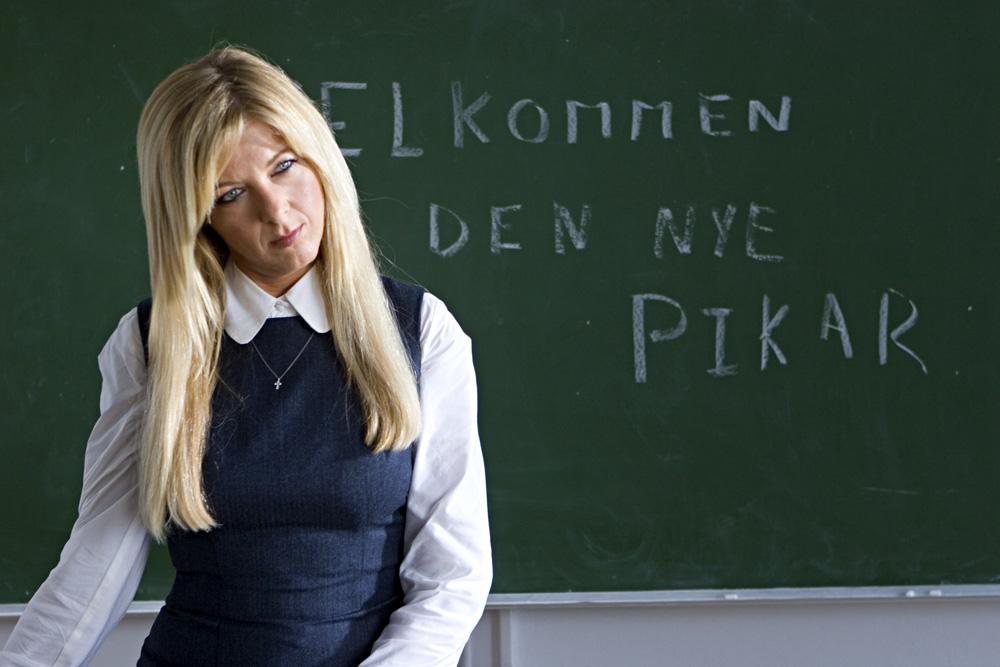 On a scale of potential carnage, putting a substitute teacher in front of a class of 6th graders ranks just below taking Stephen Hawking shopping at the Monroeville Mall. There are few things more exciting for a 12 year old than the prospect of blowing a whole class period goofing off, lying about names and pushing boundaries.

When the young Danes in Ole Bornedal’s “The Substitute” start testing their latest sub, Ulla Harms, she completely throws them off their guard as she goes from ice-cold to manic and back again, all while mocking them, correctly answering questions that she can’t possibly know the answers to and apparently reading their minds. Soon enough the kids, led by Carl, a tough kid still damaged by his mother’s recent death, realize that Ulla Harms is actually an extraterrestrial being on Earth investigating love in the way only a war-like multi-tentacled alien race can.

If you have any young minds lying about in your vicinity that you’d like to get a head start on warping without running afoul of your state’s child abuse laws, “The Substitute” is a fine film to start them out on. Despite the R rating for a “Bad News Bears”-esque attitude to kids dropping the f-bomb, this is a kids movie through and through. Thankfully, it eschews the fart jokes mixed with syrupy sentimentality formula that dominates today’s children’s entertainment for a dark and creepy approach that would make Roald Dahl proud. The new substitute is a live-chicken gobbling monster and the parents might have good intentions but they just don’t understand.

At first the parents are outraged at the stories their children bring home of the new substitute insulting them and pushing them to the breaking point but when a tearful Ulla Harms tells them at a parent-teacher conference that maybe she just cares too much, they all rally round the unorthodox substitute. While all this is going on, Carl secretly sees Ulla turn a silver ball into the Superintendent of Education and later photographs some plates covered with pictures and strange symbols.

One of the photos Carl took shows an ever-increasing number of the kids in some strange farm none of them have ever visited. Based on this and what he has seen, Carl gets the other kids to join him in trying to expose Ulla Harms for what she is, which is a murderous alien from a war-like race on a recon mission to learn about human love. As the kids investigate Ulla, they try again and fail to convince their parents of Ulla’s true nature and find themselves packed off on a bus for an overnight field trip to a suspiciously familiar-looking farm.

“The Substitute” taps into a kids movie vibe that has been woefully underused since the 80s. Then we had movies like “Goonies” and “Monster Squad” that didn’t talk down to kids and had no problem with throwing in some scenes that might be legitimately scary. Kids movies today tend to have blockbuster budgets, cutting edge special effects and star comedians and/or rappers who are being paid outrageous sums of money to make us question why we ever liked them in the first place. “The Substitute” is a modest film. Some of the CGI effects look like something from a mid-90s CD-ROM and it’s never really clear exactly what Ulla’s master plan is. That doesn’t matter, though, because the film looks great, the performances are great and most importantly, it’s tons of fun.

The primary forces behind the camera on “The Substitute” are director Ole Bornedal, best known for “Nightwatch” (the Ewan-McGregor-in-a-morgue one, not the Russian Matrix-ripoff-with-vampires one) and cinematographer Dan Laustsen who worked on “Mimic”, “Brotherhood of the Wolf” and most notably, was the primary reason “Silent Hill” was watchable.

They work together to give “The Substitute” a washed-out, high contrast look that suits the material well. Bornedal also gets great performances out of the kids who are refreshingly real compared to the robotic show-kids who anchor most American children’s movies. Without a doubt the high point of the movie is the unhinged and charismatic portrayal of Ulla Harms by Paprika Steen. Steen is a veteran of the experimental Dogme 95 movement led by Lars Van Trier and in “The Substitute” she cuts loose in a performance that jolts from funny to menacing in a way that is pure joy to watch. She’s like a psycho Mary Poppins who wants to bang your dad and then eat his brains.

It’s rare we get to recommend a horror film for the whole family but “The Substitute” is the kind of movie you can pop in the DVD player and enjoy with just about any audience. It’s funny and scary and silly and sad and weird, often all at the same time. Whether you’re raising the next generation of horror freaks or just looking for a fun trip back to the days when it seemed plausible that your teacher could be an alien, “The Substitute” is the real thing.