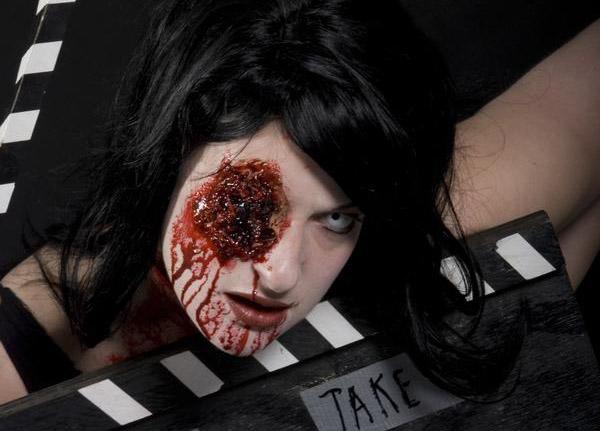 We've got a few independent filmmakers that visit the site from time to time, so I'm sure they can relate to this scenario. You figure you can write, act, and direct. You're working on a shoestring budget. All you need is a few crappy actors, a guy or two to work the cameras and a monkey to work the fog machine. The problem is, everybody else on your crew, they're not quite as into the whole idea as you. They screw off, joke around at inappropriate times and in general slack off. So when the crew quits due to your unconventional temper, you're stuck with half a movie. What to do? Crack under the pressure, or find a creative way to extend your budget for the blood, guts and death? That, in a nutshell, is the setup for "Lights Camera Dead".

"Lights Camera Dead" is a very indie, very low budget slasher flick that's packed with some comedy and some decent kills. As the description says, its a movie that comes with some common growing pains for first time film maker; that's not to say it's a bad movie though. There is a lot of things to like here and if you can make it through the choppy moments that pop up from time to time, you'll find yourself surprised at how much you liked it by the end.

The high point for "Lights Camera Dead" is the writing. That's not a very common occurrence in films such as this. With a plot that makes sense and never tries to make itself convoluted, its actually refreshing to see a movie that doesn't rely on twist endings to make itself interesting. Granted, the plot does slow down in spots but it still manages to be engaging and tell a story. A complete, straight forward story no less. As an added bonus, they do a good job to make you laugh a bit as well. Sure, some of the jokes are corny, but that's why watch B-Movies in the first place!

The cast at play here are largely first timers and it does show. The majority though do a competent job and some of the cast are fun to watch. There are a few issues with some stiff deliveries, but its not the norm. The only real issue I found with "Lights Camera Dead" came in the pacing. There are moments when the plot either wanders or the action slows down. These occur mostly in the middle of the film causing the viewer to drift a bit. It's a matter that could most likely be tightened up with a bit of editing. Thankfully though, as the movie winds on and we get to the climax of the third act, these problems no longer exist as they get down to the meat and potatoes, and the real fun of movie. There's some great fun as the two film makers begin to bicker over small things when they get down to work.

At the time of this review, I believe "Lights Camera Dead" is still working on their DVD distribution, but they have been making some festival circuits. If you can find a screening, its definitely worth a watch. There are some flashes in the script and the movie itself that truly smack of some good old fashioned 80's B-Movie fun, and it's these moments that will make you smile quite a bit as you go through.

Finally, to clarify, I feel that these types of movies deserve to be rated against movies of their own caliber. Here you have a case of people with a dream who managed to scrape together the equipment and just enough money to make that dream a reality. There's a large market of these types of films, the new "B" you might say, that tend to stand in their own corner even outside the general direct to video fare. "Lights Camera Dead" stands up with the best of these types of film and definitely classifies Aisthesis Productions as a crew to watch for in the future. Given some more money and the means to put together a bigger film with better equipment, it won't be long at all until you start to see their names more frequently on your video store shelf.