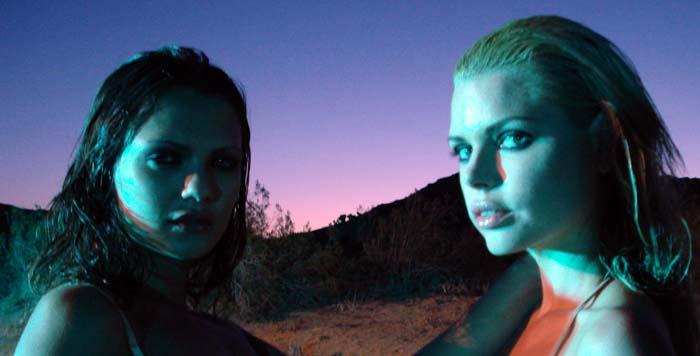 Vampires are like snowflakes. Out of the stable of horror movie monsters, no other creature is quite as malleable and subject to interpretation as the vampire. There are literally hundreds of years worth of lore and rules that a filmmaker can pick and choose from to make his or her vampires unique. How do these vampires feel about garlic? What about religious symbols? Does sunlight equal instant death or just a Freddie Krueger makeover? Is the vampirism supernatural in nature or does it have some kind of scientific basis? Can they change shape? Mesmerize people? Reflect in a mirror? Sparkle?

With all of these questions in play, vampires can vary quite a bit from movie to movie which is one reason they’ve lasted so long. Eighty years after Bela Lugosi first donned the cape, there’s still the possibility that someone will come up with a new conception of vampires and make an ancient bit of folklore relevant to modern audiences. “Life Blood” comes through beautifully when it comes to making a vampire story you’ve never seen before. It falls flat on its fangs, though, when it comes to making a vampire movie you’d actually want to watch.

The film kicks off on New Year’s Eve 1968 with a Hollywood party attended by two mythical creatures. No, not vampires, but rather a pair of unlikely lipstick lesbians that could be sprung directly from the Maxim Magazine-soaked imagination of an overheated 14 year old boy. The two girls, Brooke and Rhea, played by former second tier girl group refugees Sophie Monk and Anya Lahiri, reject the advances of a Hollywood it-boy Warren James because they’re just so into each other, you know, and if you don’t believe it they’ll make out in front of you just to prove it. After this rejection, James sets his sights on another victim, played by Rob Zombie’s Laurie Strode, Scout Taylor-Compton. James’s idea of a hot hook-up starts out with a little foreplay involving a bar of soap in a sock. Brooke hears the commotion and walks in on James as he’s preparing to attack the girl. She convinces James to give up on his conquest with the help of 87 stabs with a knitting needle.

Having just murdered a Hollywood star, the girls escape the party and flee through the desert. Then they run over an possum and see God. No, really. Luckily for them God is a hot lesbian too and She has appeared before them to transform Rhea into an eternal avenging angel with the mission to rid the world of evil. Rhea protests and asks God to do the same for Brooke and God, in Her eternal wisdom, figures “Hey, why not? Giving unmeasurable power to an unstable girl who has literally just murdered somebody – what could go wrong?” Sometimes God works in mysterious ways but sometimes She just doesn’t think things through.

When the two recover from their burning bush moment they realize that 40 years have passed and it is now New Year’s Eve 2008, presumably because all of those period costumes and settings were getting too expensive. Next, as you might imagine, they set off to use their newfound powers to fight evil. You’d be imagining wrong, though, because what actually happens is they fight with each other and hole up in a gas station where Brooke terrorizes the fat kid from “The Sandlot”. Turns out she’s not so into the “avenging angel” thing and, understandably, would rather apply her super-duper vampiric abilities to doing hoodrat stuff with her friends.

The premise of lesbian vampires appointed by a female God in a see-through top to do Her will on Earth could be some grade-A grindhouse fangsploitation, but the entire premise of the film is literally introduced and set into motion before being promptly thrown away like a werewolf’s shirt in a Twilight movie. The rest of the film is essentially a siege movie with Brooke killing people one-by-one as they come into the gas station while Rhea is unconscious behind the counter with no pants on. Not only does the plot meander and forget what the movie is supposed to be about but it also contains some of the clunkiest dialogue I’ve ever heard in a film that stars recognizable actors. Here’s an actual line from the movie: “What girl falls for the mouthfuls of crap that constantly come out of your mouth?” Even Tommy Wiseau would break out the Liquid Paper for that line.

“Life Blood” is the worst Rob Zombie movie Rob Zombie didn’t make. This is the kind of movie that thinks that showing breasts, blood and hot girls kissing will distract stupid horror fans from realizing that they are watching an awful, awful movie. If you’re the type of horror fan who can enjoy a movie solely on those factors, well, here you go. Enjoy. Now please go away and stop ruining the genre for the rest of us.