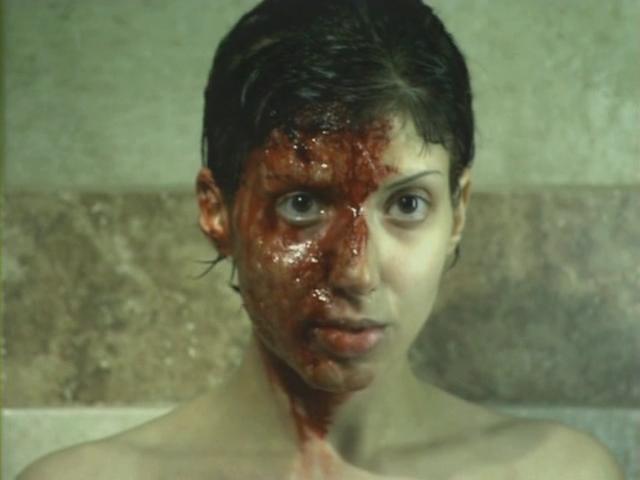 It’s a sad fact that the earliest icons of horror films finished their careers in a fairly disreputable manner, making movies that cashed in on their fading stars in a deliriously exploitative manner. An ailing Bela Lugosi fell in with Ed Wood and made the notorious “Plan 9 from Outer Space.” Ravaged by years of alcoholism, Lon Chaney, Jr. put in his last significant performance in Jack Hill’s madcap “Spider Baby”. Boris Karloff fared better than the other two owed to a late career resurgence due to his grammy-winning narration of “How the Grinch Stole Christmas” and his role in Peter Bogdanovich’s debut film “Targets”, but he also rounded out his career in a less-than-spectacular fashion by appearing in a series of four Mexican horror films in the late 60’s. Coincidentally, Karloff’s scenes were filmed in LA by Jack Hill and were then spliced together with the footage shot in Mexico.

“Fear Chamber” is generally acknowledged to be the best of Karloff’s Mexican films and it is quite entertaining for anyone who is a fan of the kind of cheesy B-movies heckled on Mystery Science Theater 3000. The plot description alone should be a pretty effective litmus test of how much you might enjoy this film. If you think it sounds crazy, hilarious and lots of fun, you will probably enjoy “Fear Chamber”. If it just sounds stupid to you, then “Fear Chamber” is not for you. Walk away.

Karloff plays a scientist who has discovered a sentient rock deep within the earth’s surface. Yes, a sentient rock, although Karloff goes out of his way to explain that while the rock is “functional” it is not alive. Whatever that means. The rock communicates through Theremin noises and feeds off of fear. In liquid form. And it has a tentacle and telepathically promises to give one guy diamonds. But wait, here's where it gets weird.

To obtain fear-infused blood to feed to his pet rock, Karloff has constructed the titular Fear Chamber, a kind of Gothic cave with a Black Mass altar which he leads hapless young women into in order to scare the pants off of them. He’s aided on this project by an evil lesbian nurse, a sadistic bald midget, a blind guy in a turban and a brutish dimwit with a lobotomy scar that I’m not entirely sure was a special effect created especially for the movie. If it all sounds like a dream sequence from a David Lynch film, you’re not too far off.

A delightfully twisted early scene involves a nubile chica going to sleep only to have her bed and the wall behind it to swing around, Scooby-Doo style, and deposit her in a carnival-style house of horrors. As she runs from the spooky spiders and dense fog at every turn, she is captured by black robed cultists who tie her to a large grate over a fire. An also-robed Karloff intones some praises to the Dark Lord and a large sacrificial knife is raised above her. After she passes out with fear, Karloff and the others take off their robes to reveal surgical scrubs beneath and walk through a hidden door in the cave wall into a 60s mod high tech laboratory where they extract the girl’s blood, being careful not to harm her. It was just an elaborate ruse, all in the name of science.

Karloff was clearly a professional even to the end and he gives a performance that is far better than this material deserves. He was wheelchair-bound at the time of filming and most of his scenes are of him sitting or in bed or obscured behind a large console of science-y looking instruments. Even in his frail state he’s a commanding and intriguing presence, which has the unfortunate effect of causing the middle of the movie to suffer in contrast when Karloff’s character is pushed aside for a less interesting storyline involving his daughter and his assistant. Even though his scenes were filmed in a different country from the rest of the film, kudos are deserved for making this discrepancy virtually unnoticeable.

“Fear Chamber” feels like the greatest episode of MST3K that never was. This is such perfect fodder for Mike (or Joel) and the bots that its existence is a pretty good argument for the necessity of the show being resurrected for the specific purpose of riffing on one movie. Alas, that won’t happen. Maybe someday one of the current spin-off projects will cover this movie, but until then we’ll have to settle for playing the home game. The ideal viewing experience for “Fear Chamber” is with a few like-minded (preferably quick-witted) friends and a fridge full of cold beer. Don’t forget to pour a little out for Frankenstein.

The Last House on the Left (Remake)