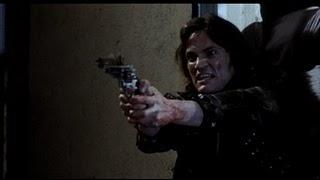 Linda Blair has some pretty interesting things to say in the special features that accompany Arrow’s DVD re-release of 1984’s “Savage Streets”. She talks about her all-time favorite line and the lack of roles for strong women at the time the film was made, but perhaps the most telling fact that she unveils is that there was a protracted work stoppage during shooting. The film ran out of funding in 1983 and its completion looked like a dim prospect until John Strong took on the producing role. According to Blair the addition of Strong’s strong hand was what made “Savage Streets” the cult smash that it became. What were John Strong’s contributions to this exploitation watershed (besides his porntastic nom-de-smut )? A single pass through “Savage Streets” will probably tip you to his influence or at least reveal a dividing line between the pre and post work stoppage material.

“Savage Streets” follows two groups of ne’er do well youth who call the seedy streets of Hollywood their home. The Scars are a quartet of drug dealing drop-outs who are always spoiling for a fight and cruise the boulevard looking for debtors to beat down and girls to defile. The Satins on the other hand are a bunch of tough girls who seem to prefer shopping to mayhem but never back down from a challenge. Brenda (Blair) is the leader of the Satins and she and her girls are cruising the Ave. one night along with Brenda’s deaf-mute sister Heather. Heather (Linnea Quiggley) is as pure as the day is long and her sister works to protect that virtue with everything she has. On this fateful evening Heather is nearly run over by the Scars and after a heated exchange between the two groups Brenda decides they should steal the Scars’ car and go for a joyride.

But Brenda’s carefree bear poking comes back to haunt Heather, who the Scars track down at her high school in the San Fernando Valley. While Brenda is off fighting in the shower Heather is dragged into a bathroom and gang raped by the 4 savage sad sacks. Heather ends her ordeal in a coma and Brenda vows to seek out and punish the offending culprits.

My first impulse, based solely on 25 year nostalgia, is to say “Savage Fuckin’ Streets, Fuck Yeah!!” But my inner 15 year old, fun as he may be, fails to account for time, consistency, or performance issues so long as the 3 B’s make an appearance (beaver, blood and boobs). That’s a great aesthetic for a pump-minder at a kegger, not such a great set of criteria for a movie reviewer. Still “Savage Streets”, while mostly focused on the three B’s has some other interesting aspects, both good and bad, that make it an above average exploitation picture.

The most jarring moments in this film are without question during Linnea Quigley’ rape scene. The scene is so out of step with the quippy, stock characterizations that populate the rest of the movie that it adversely affects the titillating shower hijinks and the Linda Blair bathtub sequences. Yes this is an exploitation movie and it is not at all shocking that rape is used to motivate action, but this is a problem of tone and style. For one brutal sequence it seems like the producers brought in a visiting auteur to help visualize the hell of sexual assault with little restraint. The result is that by movie’s end I felt like I had just watched a reimagining of “Grease” with gang rape in it.

It is a testament to the ideas and talents of everyone involved that this barbarous scene and the tonal dissonance it creates doesn’t stop “Savage Streets” from being a highly re-visitable piece of vintage American sleaze. Linda Blair is a welcome zaftig reminder of a time when the average pervert had tastes for a more womanly, curvaceous variety of B-movie minx. The supporting cast is hit and miss but the bad guys grind up scenery like a herd of brontosaurus and John Vernon dishes out the line of the film during his 5 minutes of screen time. All of this helps pull the viewer away from that grimy instance of sexual violence to a state of mind that allows a reasonable investment in Brenda’s revenge. To push things even further towards fun the soundtrack is an unfiltered blast of Survivor styled mid-80’s nad-rock and when those glorious John Parr-gone-too-far tunes aren’t on display a really effective, tension-filled score takes their place.

“Savage Streets” is better than it should be, not totally deserving of its classic reputation, momentarily ethereal, sporadically disturbing, and seldom boring. Will it work for you? Who knows? All I know is that Linda Blair is hot, the revenge is cold, and the violence occasionally feels like a fat right-cross after a sweet soft kiss. In my book that makes this film one slimy, pitch-shifting oldie that’s worth a look. Keep in mind that at least part of this opinion is informed by my inner 15 year old, who right now is trying to get me to go and look up nude pics of Linda Blair online.