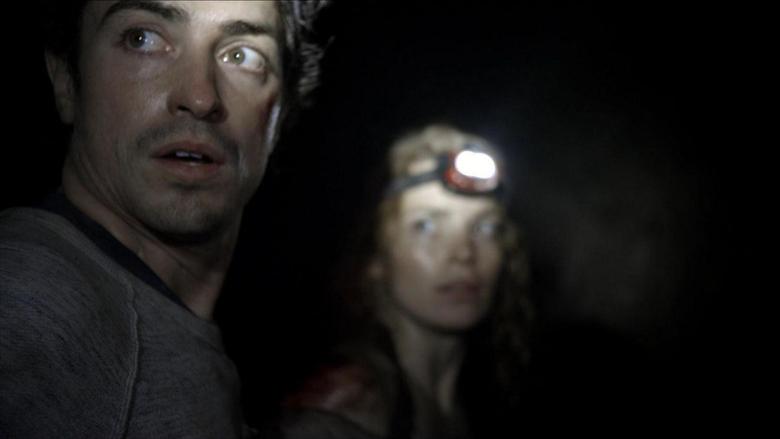 As Above, So Below (Movie Review)

Found footage films live or die by their premise, and "As Above, So Below" gains a lot of goodwill in the early going by drawing the viewer into a seldom visited setting in horror, the catacombs beneath Paris. The film chronicles the underground exploits of a team led by Professor Scarlett Marlowe (Perdita Weeks, "Prowl") and George (Bed Feldman, "Mad Men," "Cloverfield"), a master tinkerer and convenient speaker of dead languages. As the group descends into the catacombs, ignoring classic signs of danger like hallways of bones and naked chanting strangers, they start to question whether they are descending into hell itself. This, of course, is all picked up by their headlamp cameras, and cut together conveniently for our consumption.

Sarcasm aside, "As Above, So Below" is a well made and memorable film in parts, but is far safer than the trailers would lead you to believe. At its best, it's "The Descent" meets "Tomb Raider." At its worst, it's "The Devil Inside" meets "National Treasure." The most successful moments of the film are the ones where the setting is capitalized on. Claustrophobic corridors, mummified bodies come to life, and frightening hallucinations are all used to great effect. Unfortunately, instead of allowing the characters to descend into madness as they well should when they're KNOCKING ON THE LITERAL GATES OF HELL, they are all-to-often allowed to Nancy Drew their way out of any real danger.

"As Above So Below" is much like a well designed roller coaster: there are fleeting moments of fear with the underlying assurance that there's no real danger involved. Despite its more memorable aspects, this film is often a much better roller coaster than it is a movie.