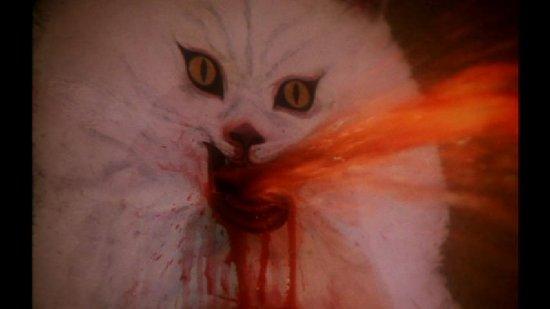 OK, Japan, the time has come for those of us here in the west to ask: what’s up? For years now we have been watching with a combination of bemusement and amusement as you ship over tons of culture that more often than not seems like elaborate, country-wide performance art pieces. What’s up with the weird hairstyles and the cartoons that inspired them? What’s with all the creepy robots that we all know you are really building as love slaves? What’s a gothic Lolita? To the point, Japan, please, for once and for all, let us know: are you serious about all this stuff or are you just messing with us? If it’s the latter, I get it. Well done. You truly are the Andy Kaufman of countries. If it’s the former, though (and all evidence points to the fact that it is)… well, Japan, you’re awesome at what you do even if it does confuse and scare me.

Speaking of confusion and scares, “Hausu” (or “House” for you non-native Engrish-speakers) is possibly the weirdest thing ever to come out of the country that gave us sweat-flavored beverages and tentacle rape. The fact that the movie was made in 1977 – well before the world in general became aware of just how deeply weird Japan is – almost lends the film the patina of a historical document that demonstrates that Japanese culture didn’t slowly evolve from somewhat quirky to full-blown WTF-ville, but in actuality has pretty much always been batshit insane. How much you enjoy the experience of watching “Hausu” has a lot to do with your tolerance for an endless parade of stream-of-conscious low-budget surrealism that seems like it sprung from the mind of a 7-year-old.

In fact, there’s a good reason “Hausu” feels like it was made by a child on the combined influence of mescaline and Pixy Stix: it was. Well, maybe not mescaline, although I’m not quite ready to rule that out completely. Director Nobuhiko Obayashi got the idea for the film from the nonsensical rantings of his clearly insane 7-year-old daughter. It’s only from the mouths of (mentally disturbed) babes that we could get a film that features a portrait of a cat vomiting watery blood all over the floor and an disagreement over watermelons and bananas that ends with a dancing skeleton.

“Hausu” follows a schoolgirl who brings a group of her friends along to her elderly aunt’s house for a vacation. What the girls don’t realize is that this is a hauntedu hausu and the elderly aunt is actually a mournful ghost who, with the help of her magical ghost cat, is luring unmarried girls back to her house so that she can kill them. The motivation behind all if this is that she needs the revitalizing power of virgins in order to continue pointlessly waiting for her husband who died in WWII to come home again. Ghosts are apparently not so bright and that’s about as close as anything gets to making sense in this film.

The way the old aunt kills the girls is by using the house and the appliances within it. Wanna see a girl get her fingers bitten off by a piano? There you go. How about a girl kung fu fighting, erm, a room before being flying guillotined by a hanging lamp? Got that. A decapitated head coming out of a well and biting a girl right on the shiri? It’s all in there. The special effects are inventive but extremely low-budget, mostly using either blue screens or optical printers to turn the film into a live-action horror cartoon.

Maybe I wasn’t in the right frame of mind or maybe in this post-Adult Swim world I'm not as easily amused by random weirdness but I enjoyed “Hausu” much less than I expected to. The best way to describe the film is as some lost Sid and Marty Kroft children’s show from the 70s as directed by a young Sam Raimi. Yes, that does sound awesome and that there are no doubt many people who will find this movie and treasure it as a prime example of bizarro cult cinema, but in my dotage I can’t enjoy a movie solely because it was apparently made by lunatics who somehow gained access to cameras and other film production equipment and managed to make a movie before they were detained by the authorities. “Hausu” definitely has its charms and will no doubt earn a place of honor in the film collection of many mondo movie aficionados but if you come into it hoping for anything more than 8-bit era special effects and “dude, you gotta see this” moments, you will be disappointed.