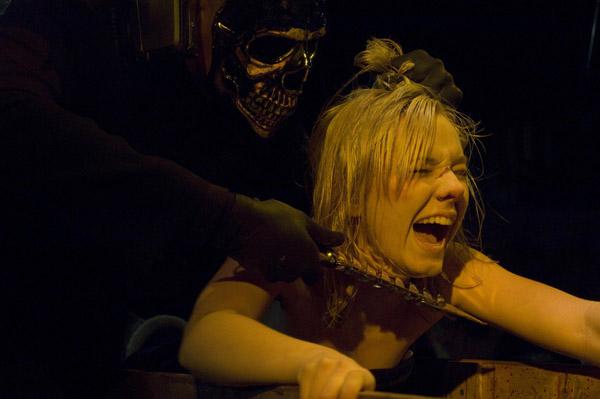 Robert Hall has quite the impressive resume when it comes to working special effects magic. From TV shows like "Firefly", "Buffy the Vampire Slayer", "Angel" and "The X-Files", to movies such as "Wishmaster", "Ghosts of Mars" and the recent "Red Sands", chances are as a horror fan you've seen his work somewhere. New from Anchor Bay, his second directorial effort "Laid To Rest" gives you the chance to see what Robert is capable of bringing when his work is done behind the camera.

"Laid To Rest" starts as a character known only in the credits as "The Girl" - played by the lovely and talented Bobbi Su Luther - wakes up in a coffin. Confused and disoriented, she claws her way out only to discover that she is being stalked by a tall, sleak slasher killer in a chrome skull mask. After the killer offs the caretaker, "Girl" manages to escape and begins to stumble down the road. Along the way she flags down Tucker, a middle aged man with a cane who decides to help her by bringing her back to his house. There they run into Tucker's skeptical wife Cindy (Lena Heady from "The Sarah Connor Chronicles") who is not very happy that her husband has brought home a confused, bleeding woman.

It doesn't take long for our deranged killer to track the girl down to Tucker's house, and it's here where we get to see him lay down some real carnage for the first time. Given Hall's special effects background, it shouldn't be a surprise that the film's death scenes are very well executed. There is a very conscious intent here to film the most brutal slasher scenes possible, almost as if Hall is getting retribution for all of his work excised by the MPAA throughout the years. Working in a setting where a direct to DVD release was inevitable, it allows him to run wild, and in its best moments emulate something along the lines of 2007's "Hatchet".

Once the initial setup is out of the way, the main direction of the film sets itself up. Tucker takes "the girl" with him and sets out to get some help, with the notable hindrance that his car is nearly out of gas. They manage to get to the next house down the road where a meek computer nerd tries to help them reach the authorities. Since he doesn't have a landline and his computer fails to get them help, the trio decides to make a trek to the Sheriff's office.

Hall goes out of his way here to set up his characters in the most isolated position possible. You have three people who are strangers to each other, all living (or at least presently occupying) in an incredibly small, rural town in the Southeastern US. With the three cops in the town murdered and no cellphone coverage to speak of, the film literally becomes a "try and make it until morning" type of affair. The logic being that Tucker's brother-in-law is expected at his house in the morning, and when he arrives he'll surely notice something is wrong. Between the desolate, deserted setting and the band of unlikely heroes forced to bond with one another in order to survive, "Laid to Rest" actually begins to resemble a zombie movie in certain respects. Whether intentional or not, it's an interesting thing to think about while watching the movie. Играть на официальном сайте казино https://casino-slotoking.com/ можно здесь.

The killer in "Laid to Rest" provides what is most likely the strongest visual in the film. He's a tall, bald white guy with a large chrome skull mask over his face that we're continually shown him gluing down to make sure it stays. He's obsessed with technology, using it to track his victims as well as taunt them. A camera affixed to his shoulder is almost always on, and we're constantly shown his collection of MiniDV tapes documenting his crimes. In many ways, he's almost "Dexter" like in his meticulous souvenir collecting. He's not particularly scary in any way, but one definitely has to admire his moxy.

The fact that he always seems to show up in the right place at the right time, presumably at warp speed, and at certain points has information on characters that it's nearly impossible he was privy to, could possibly be a little hard to swallow for some viewers. From the time we jump into the film however, it's pretty apparent that you're not going to get a realistic character study, so it's mostly an issue of keeping your expectations in check.

Although they hint at the reasons for the killer's appearance and obsession with technology, it's a thread that's never explored further. Given the suggested voyeuristic nature of his obsession with filming his victims, I thought for sure there would be some "Peeping Tom"-like themes brought up. In reality it just seems like they thought it was a cool look, so they took it and ran with it. For what they were making, I won't necessarily fault them for that.

In the end "Laid To Rest" is a modest slasher film that aims to hook you in with an original killer and setup, and knock it out of the park with its dazzling gore effects. Despite what the box cover says, Lena Heady, Jonathan Skaech and Thomas Dekker are not the stars here, but merely window dressing, most likely doing a favor for a friend with their 5 minutes combined on-screen time.

The film does have some decent performances from its lesser known actors, and Hall's direction is pretty tight throughout. The biggest problem overall is a lack of budget, which hinders the action and scope of the film. I enjoyed the gore, the arch of the story, and the fact that it doesn't take itself too seriously, but I can't help but feel that "Laid To Rest" falls a little bit flat as a slasher. Those who will take in a good stalk 'n slash any day of the week will most likely enjoy, but I don't see this having a wider appeal much beyond the die-hard slasher fans. Somehow though, I don't think that will bother Hall too much.