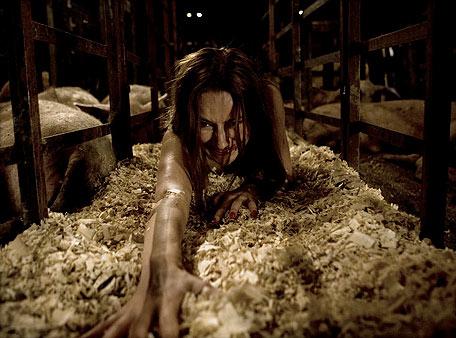 Faith is escaping from an abusive relationship. Her friends have secreted her away to a new apartment and all seems to be going well. On a night of club hopping to celebrate her new found freedom, Faith notices another young girl who is being hustled by another domineering man, and its obvious she doesn't really want to be there. Thinking fast on her feet and not wanting to see anybody else thrust into the life she once lived, Faith cozies up and acts like an old acquaintance, and in the process manages to rescue Lola from the aggressive barfly who has a death grip on her arm.

Lola and Faith become fast friends and after exchanging phone numbers that first night, they begin spending more and more time together. Lola takes Faith home with her to the farm she lives on with her father and brothers, in a house all to herself. The two girls hit it off so well that Faith moves in and they become room mates. All is well and quiet until Faith is warned to steer clear of Lola's father, as they do not get along very well. Soon, Faith discovers there may be even more dark secrets to Lola's father.

"Slaughter" makes a good attempt at being a crafty and shifting story but ultimately fails in the end. Not so much due to the story itself but because of the lackluster performances and scenery surrounding it. The hints that we're given early on in the film are intriguing. We're continually given little teases as to what is happening on Lola's farm. When nothing ever really comes to light over these teasing moments however, the movie becomes burdened and weighed down with what could have been, instead of what was, moving "Slaughter" from the horror category to more of a drama than anything else.

Further muddying things here is the inclusion of a few side plots that manage to do absolutely nothing to move the overall story along, or even add to the body count. Early on we are introduced to Faith's friend Cathy who helps her to move out on to her own, as well as the idea that she his escaping an abusive ex-boyfriend. This manages to show us why Faith is looking out for a new friend and why she is quick to come to Lola's aid. Had they left this element at that, all would have been good. Instead, we are reintroduced to the boyfriend and Kathy once again later in the film, only to have them die off. It is segments such of these that do nothing to clarify the already slow plot and mange to just add clutter.

Glaring plot issues out the way, the story in itself was actually good, which makes the outcome of "Slaughter" such a hard thing to bear witness too. While not completely original, it was solid in its base elements and could have worked. Adding to the downfall though is a cast filled with actors who are getting the job done, but doing so with zero excitement whatsoever. Never do we feel any tangible fear, insanity or disgust. We feel a group of actors phoning it in and earning a paycheck. Sadly for writer/director Hopewell, what small details of his script that were actually well thought out are forgotten by the end due to sheer boredom. It's unfortunate because of what could have been, but "Slaughter" falls straight to the bottom of barrel when it comes to the After Dark Film Fest titles this year.