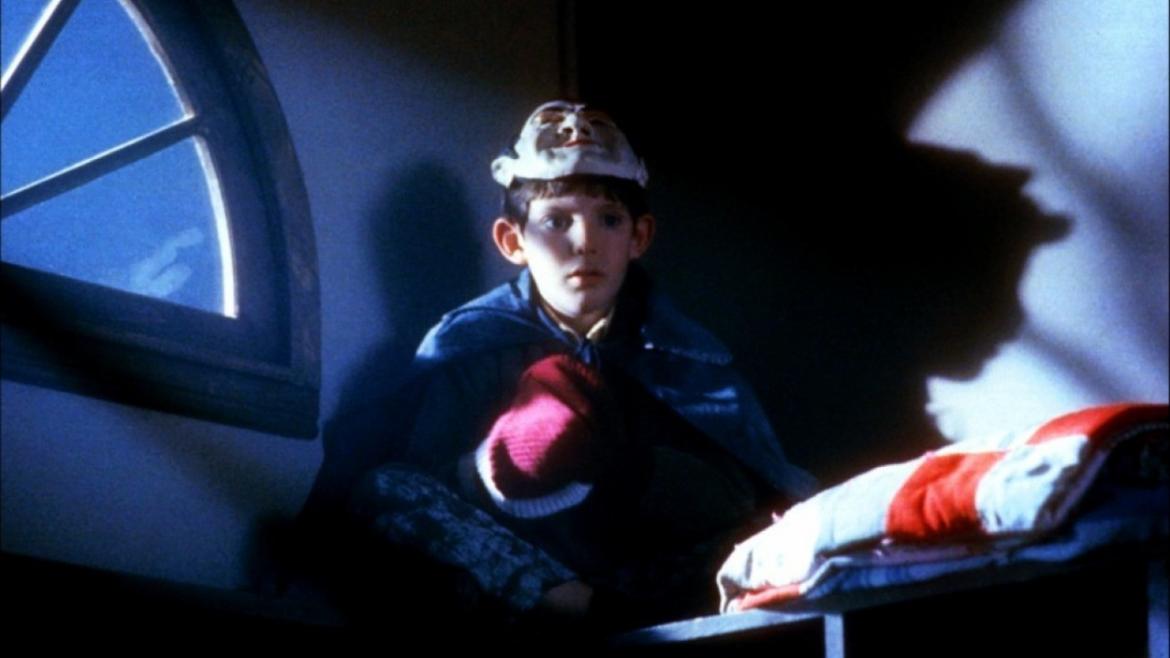 I have a theory that nostalgia is one of the most destructive and unproductive emotions people are capable of and can directly be blamed for many of the evils in this world, including 90% of VH1’s programming, the inexplicable popularity of any number of past-fetishizing politicians/pundits and Oliver Stone’s career. I’m far from innocent, myself - a disproportionate amount of the music on my ipod was recorded between 1992 and 1997 and I’ve spent plenty of beer-soaked nights trying to remember the lyrics to the theme song to “Mr. Belvedere” or who the fifth member of New Edition was.

In measured doses and cut with a healthy amount of cynicism and realism, there’s nothing wrong with a little bit of nostalgia and a handful of films and tv shows have risen above the sappiness to create something timeless.

“Lady in White” hits with a double-whammy of nostalgia. When it was released in 1988 it rode the wave of Reagan-era nostalgia for the 50s and 60s and today, as a 20-year-old, kid-friendly horror movie, it’s just about due for a resurgence amongst those who half remember catching it on HBO as grade-schoolers years ago. In a lot of ways, “Lady in White” could almost be “The Wonder Years” with ghosts or “A Christmas Story” retooled for Halloween, right down to the structure of a writer looking back on his childhood. Frankie, the boy at the center of the story, even gets a highly anticipated package in the mail and is tormented by a bully with an accompanying pint-sized toadie.

The story kicks off when the two bullies trick Frankie into going in the school’s cloakroom after school hours and lock him in there overnight. While trapped in the cloakroom, Frankie witnesses the ghost of a girl, who is as shocked to see him as he is to see her. The astonishment soon gives way to the ghost girl reenacting her murder and being carried off. Shortly thereafter, the murderer returns to the cloakroom to retrieve some incriminating evidence that dropped down the heating vent and, noticing Frankie, attacks him and nearly strangles him to death.

When Frankie recovers, he shares his story the schools African-American janitor is arrested for the attack as well as a series of child murders that have taken place over the last ten years. There is no real evidence linking the janitor to the crime, but the corrupt police department are eager to pin the murders on someone and in the age of Jim Crow a black suspect makes a fine scapegoat.
Meanwhile, Frankie begins seeing both the ghost girl who he learns is looking for her mother as well as a mysterious lady in white who is said to haunt an abandoned house in the nearby woods. Together with his older brother, Frankie tries to piece together the identity of the murderer, how to reunite the girl with her mother and how the lady in white is linked to all this.

“Lady in White” is a great example of a gateway film that is entertaining and spooky enough to please seasoned horror fans but light enough on gore and scares that a kid could watch it without having to sleep with the light for weeks after. What makes it work is that the film isn’t toned down like most of the PG-13 horror flicks of today, where it’s clear that they’ve cut away just enough gore and covered just enough breasts to bump up against an R rating without ever crossing the line. Instead, the stronger stuff isn’t in the movie because it doesn’t need to be. The film knows what it is and stays true to that.

It is inevitable that a 20 year old movie with a good amount of special effects is going to look dated and “Lady in White” is no exception. The ghosts and the backgrounds never quite mesh up and it’s clear that most of the movie was shot on a sound stage. In particular, the woods outside the Lady in White’s house seem to be filled with more fog machines than a Whitesnake concert. The two inches of thick fog on the forest floor is so cheesy-looking that it instantly destroys the suspension of disbelief the movie has been building up to that point. I can forgive dated bluescreen effects but there’s no excuse for a filming a spooky forest that looks like something out of a Jaycees haunted house.

Another issue with the movie is the sloppy way it tries to make a nod at the civil rights movement, presumably out of a sense of duty that any movie set in the mid-60s has to shove in something about race relations. The problem is that the storyline goes nowhere. The janitor and his wife are introduced only to be taken out of the movie in a bizarre scene that could have come from a different movie and are never referred to again. It almost feels like the writer tried to flesh out the movie by swiping a few characters from “To Kill a Mockingbird” (including the very Boo Radley-esque Lady in White herself).

Rough edges aside, “Lady in White” is worth checking out, especially if you plan on watching it with a younger or otherwise non-horror-inclined audience. If you look past the cheesy effects and the occasional blatantly contrived scene you’ll find a good-humored ghost story that achieves a nice balance between nostalgia and scares.