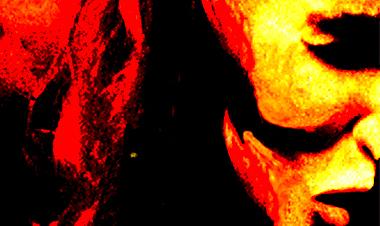 “Gimme Skelter” is the story of a band of murderers led by a man claiming to be Charlie Manson’s bastard son Phillip Valentine. They plan to lay siege to the small town of Bannion’s Cross New Mexico (pop. 67) so that Phillip can impress his dear old dad. The story follows both the invaders and Todd, a somewhat shiftless 20 something. Early on Todd’s frustration with his petulant but loving girlfriend Jonda pushes him into the arms (crotch) of Brass, one of Phillip’s acolytes’. After seeing him with Brass, Jonda kicks Todd out, the New Mansons hit the town and the intersection of about half a dozen subplots begins.

Writer director Scott Phillip’s made a splash on the horror scene with his grassroots 2005 film "The Stink of Flesh". “Gimme Skelter” certainly represents a surge forward in both ambition and fun. Phillips assembles a capable cast under the umbrella of a good idea. Unfortunately, for my tastes the film falls short of what is promised by its first 20 minutes. The initial goodness is developed with ample boobage and just enough blood. Splash in a little Gunnar Hansen and some back alley humping and you’ve got a 1st act that may not travel a lot story-wise, but gives the idea of a film that is ready to go completely off the rails in pursuit of nudity, sleaze and gore soaked hilarity.

This is where “Gimme Skelter” let this viewer down in spades. The film levels, then tapers off as the siege unfolds. That the invaders are semi-hapless and ironically leaderless is a good piece of writing; but the chaos that should ensue from this development never really flowers. The boobs disappear for far too long. The dialog falters and the violence fails to impress. We all love quirky characters but if they are just more stiffs for the pile, which they are here, the novelty wears thin fast.

What’s funny is I think much of the material to make “Gimme Skelter” more balanced and fun may already be present in the film. A restructuring so that we aren’t given so much so early would likely make the second and third acts pay-off in a bigger way. The strengths here are Gunnar Hansen’s performance, Elske McCain and Sarah Turner’s Russ Meyer Super Vixen sassiness and a good story.

Unfortunately in its current form “Gimme Skelter” isn’t all that funny; nor is it scary, atmospheric or wild. All of things I really wanted it to be at least in small doses.