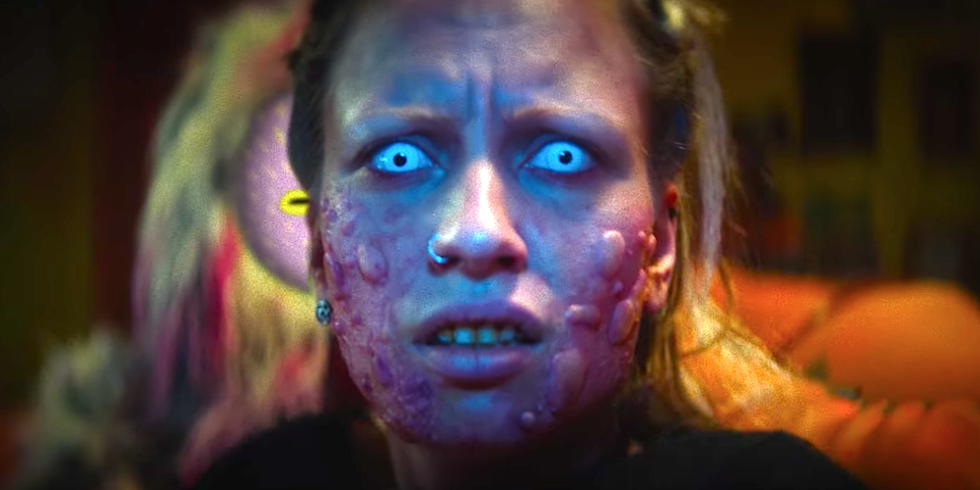 Why? Just why? If the conversation around Kuso could stop right there, life would be just fine. Yet, more needs to be said--either as a civic duty to protect my fellow humans, or as some sort of twisted recommendation. One thing is certain and as cliche as it sounds, absolutely under no circumstances should this movie be watched while consuming any food or liquids.

Where to begin. Supposedly, this film takes place after a devastating LA earthquake that leaves the city in some form of apocalyptic aftermath. How do you come to that conclusion? Well, everything is littered with herpes-like sores on their faces, there are trans-dimensional demons straight out of Dr. Seuss' discarded psyche and various other disgusting body issues lingering around to be endured.

There's no discernible story to be had as the entirety of the film feels like a series of anecdotal segments connected by an extended artistically trippy music video. It's the content of each segment that introduces one troubling bit of gross out horror after the next. We're talking sexual juices being smeared on people faces after climax followed by messy make out sessions--let's not forget the herpes sores. Don't worry though, director Flying Lotus (aka Steven Ellison) one ups himself as the movie goes along. Call these spoilers if you will, but eventually a bug emerges from one's anus cavity and the bug's excretions are used to cure a man of his fear of boobs. Also, a humongous talking boil with an English accent is used for sexual gratification as it creepily mumbles, "Feed me," while a penis inches closer and closer to it. These are just a couple examples of the pleasures awaiting you in Lotus' 90-minute feature. If you can find any contextual evidence of how any of that just spoiled you, I am deeply sorry--but also not really.

Yes, the movie is profoundly gross and very little of it seems to serve any deep purpose. It could easily be considered challenging in an artistic sense as there are moments of artistry in the nightmarish visuals and trippy dreamscapes that connect the grotesque skits. However, none of it coalesces into anything other than a shallow gross out endurance test. Только популярные сериалы в озвучке Кураж бомбей можно посмотреть у нас. Вам не нужно регистрироваться на сайте, достаточно просто зайти и смотреть свои избранные сериалы в хорошем качестве.

Kuso may eventually find its way to a list somewhere, but this list is not of the prestigious variety--possibly covered in various human excretions. Joining the ranks of a movies like A Serbian Film and The Human Centipede, but somehow finding a way to be less artistically relevant in its use of shocking content to push across an agenda of questionable taste in the name of art.