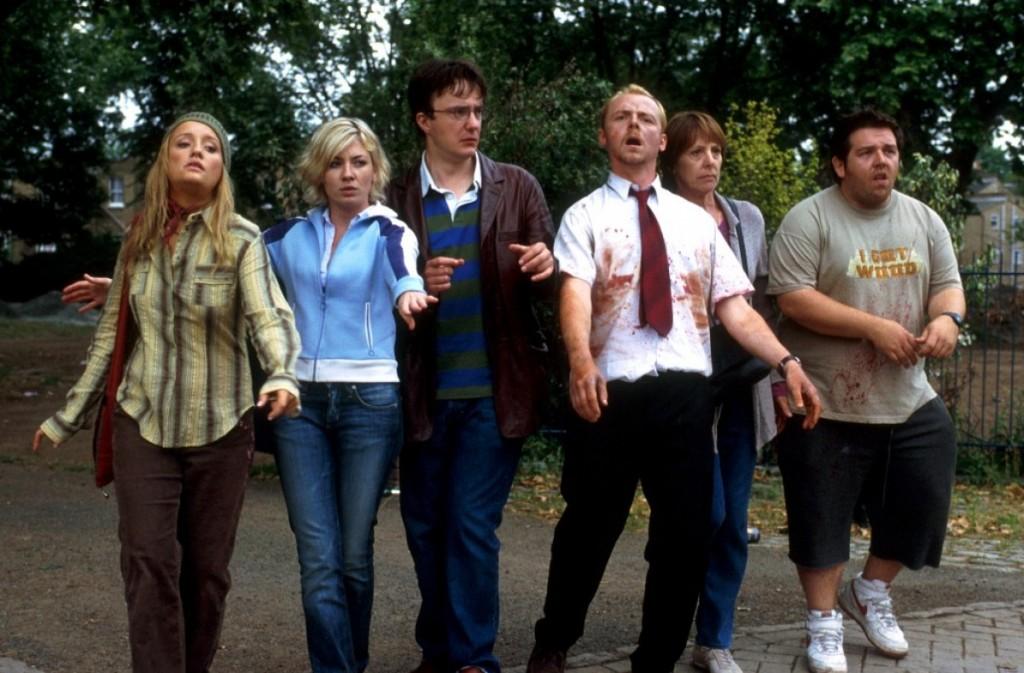 Shaun of the Dead (Movie Review)

What makes horror comedies so successful is that they explore the thin boundary line that separates slapstick from pure violence. A simple punch to the face can result in a comedic recoil of pain, but done with the right amount of force and verocity, it can become a crime scene. The best of the genre take that boundary line, broaden it, make it bold, and push any semblence of a boundary it was in the first place. Jason punching the head off of a would be boxer in Friday the 13th Part VIII: Jason Takes Manhattan crosses over normalcy and into the over the top comedy violence realm. Edgar Wright's Shaun of the Dead balances the horror and comedy genres generously and lovingly which creates an experience that allows all types of viewers, even non-genre fans, to enjoy. The attention to the physical comedic violence, the average joe turned hero narrative, and out of the box visuals meld together to create one of the best horror comedies of all time.

Shaun (Simon Pegg) is a man that needs more variety in his life. His girlfriend Liz (Kate Ashfield) desires a more intimate and meaningful relationship from him, instead of their usual pub crawl with Shaun's best mate Ed (Nick Frost) in tow. Shaun's life is clearly routine and without moments of excitement as he shuffles from his flat, to his manager position at an electronic's store where his employees pay him no respect. His stepfather Philip (Bill Nighy) is a continual annoyance in Shaun's mundane life as he emplores Shaun to follow through with visiting his mother as often as possible. With two women desiring his attention, Shaun begins to feel the pressure of change in his life in the midst of the world around him also evolving. The people inhabiting this drab world begin to show a different side to themselves; one of extreme bloodthirst. A zombie outbreak has occurred in this sleepy town, forcing all of its inhabitants to either fight back or become part of the zombified clan. Shaun and Ed barely notice anything is wrong, that is until they have their own run in with a teenage zombie. As reality sets in, Shaun pulls himself together in order to save his mom and Liz from this new world.

The references and homages to classic zombie films in Shaun of the Dead create a strong contextual joy. Within the opening shots it's clear that this world is innately mundane; people are just doing their day to day business with no sense of excitement of interest. In that way, these people are already zombie-like which becomes an interesting theme used throught the story. When the outbreak begins to occur, Shaun and Ed don't even realize that anything is different because the zombies either act like a typical town drunkard, or just a slow, shuffle-walking citizen that has no interest in reacting to things around them. One of the best moments of this comparison comes with the encounter of the teenage zombie in Shaun's backyard. Their reaction to her over the top impalement on a pole sets up the comedy that runs throughout. The urgency of their situation is low as they carefully pick which records to chuck, ninja star style, at the approaching zombies which is another nice tie into the theme that the mundane is hard to overcome.

Not only are the performances on point, especially the work of Simon Pegg as the lovably average Shaun, but the writing is clearly the star of the film. Every line of dialogue relates either to the theme of the film or flows evenly into the introduction of a new character and their quirks. Shaun's mother, Barbara, seeks a deepers connection with Shaun while also maintaining a meek presence. In her death scene, she also displays the same tendencies in her normal life, forcing Shaun to deal with her change upon becoming a zombie. The fun and joy that comes out of the horror in the film is evenly matched with the well developed character themes. Despite its apocalyptic approach, the film manages to be a blast, especially within the scene of Liz, Shaun, and Ed beating a zombie to death to the beat of "Don't Step Me Now" pumping in the background. The film is chock full of moments like this to remind the viewer how much fun they should be having.

Shaun of the Dead is the beginning of a technical trilogy from Edgar Wright, but it clearly stands on its own. In a world filled with zombie themed films, Shaun's pub crawl adventure is one of the most enjoyable and well rounded experiences that a horror viewer will find.