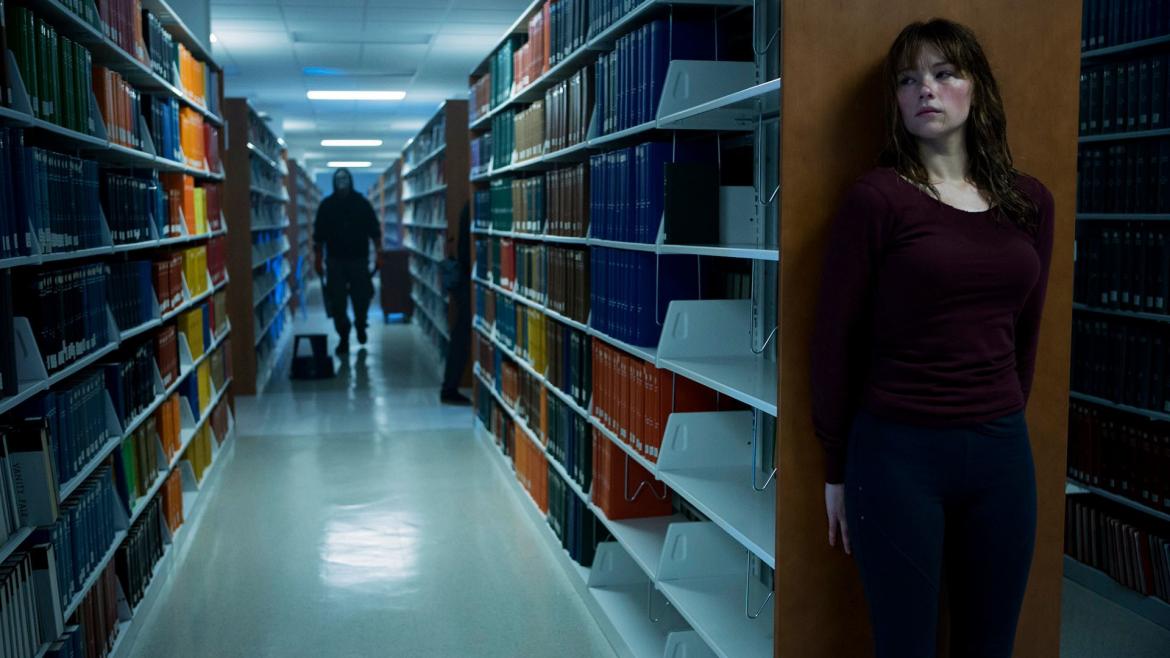 What’s in a name? An awful lot, apparently, in this tense, well-made thriller that’s often undone by the silliness behind its title: a slur used by violent cultists to disparage anyone “pretty, pure, and blessed.”

The characters in Kristy wax poetic on Blake and Heisenberg in its opening minutes, so it’s probably safe to assume that its heroine, Justine, comes to us straight from de Sade; the woman of virtue senselessly destroyed by everyone else’s degeneracy. She’s an athlete, a well-rounded student on work study, and a supportive and gracious friend and roommate. When she can’t afford to travel home over the Thanksgiving holidays, she hangs around on campus, and ends up being targeted by a group of masked Satanists. Together with like-minded sadists across the country, they target “Kristys” and post footage of their torture and murder to a message board on the dark web (“Kristy” is a derivative of “Christian,” though they only apply it to college aged women whose religious beliefs aren’t exactly vetted). In the course of an evening Justine is pursued all over a vacant university campus, witnessing every possible lifeline (security guards, the resident life director) get murdered until she’s cornered into fighting back.

Much of the movie’s effectiveness comes from Haley Bennett’s performance. She’s earthily relatable, and slips from sympathetic victimhood to capable vengeance with ease. The story could have benefitted from seeing Justine fight back sooner than she does, using her work-study status as someone with one foot in each side of the institution’s operations to her advantage in countering her stalkers, but it gets there eventually and is no less cathartic when those moments finally come.

The tension never lets up, the jumps will set your teeth on edge, and the cinematography is occasionally beautiful. But whenever you’re reminded of the goofy villains--who, with their lip piercings and hoodies, feel in every scene like they were born, Athena-like, straight from the skull of Pat Robertson--the dread is deflated a notch or two. Nothing supernatural scares me as much as the sadism that regular ol’ humans are capable of inflicting on each other, but the Satanists in Kristy reveal themselves to be ridiculous bogeymen every time they open their mouths to philosophize. They’re far scarier when they’re just off-screen, not the focus of attention.

Bennett is certainly going places: she’s just been cast as one of the leads in The Girl on the Train. Kristy also represents a step forward for director Olly Blackburn, whose last feature was 2008’s Donkey Punch (which had its fans, some more reluctant than others). Despite the familiar premise and cardboard criminals, this is worth seeing if you want a good scare when you’re home alone.