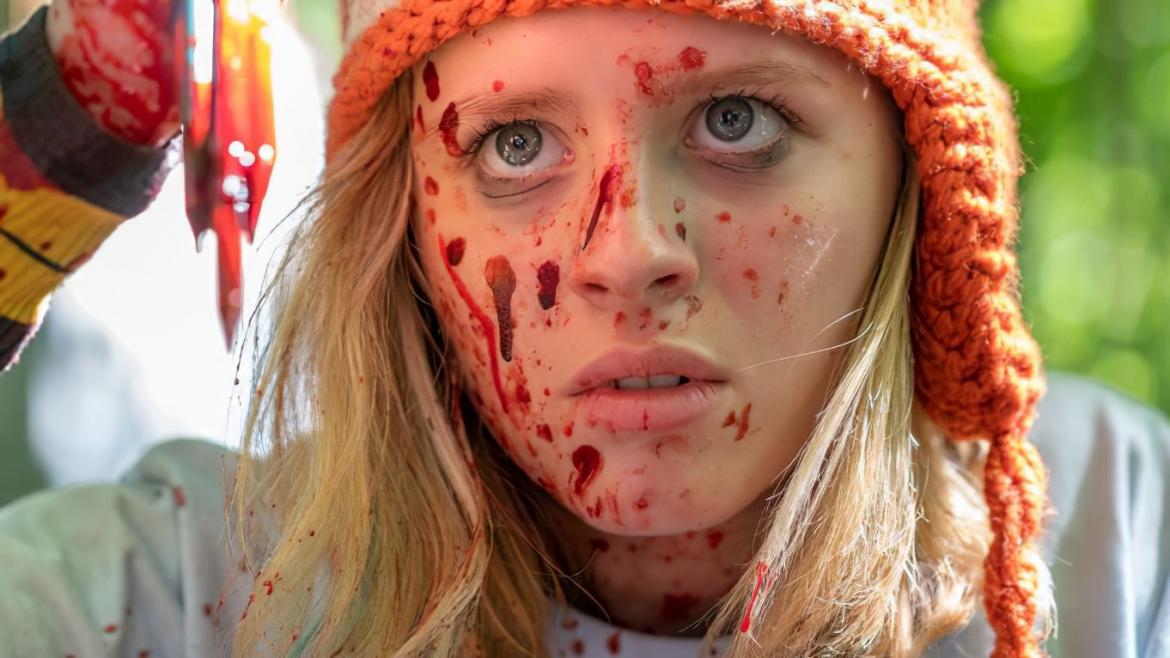 Approximately six years ago directors Jonathan Milott and Cary Murnion delivered the charming but under baked zombie comedy Cooties and followed that up with a high concept action thriller in the form of Bushwick. Both films had notable casts and were designed to take advantage of the particular gifts and personas of these performers. With Becky, the duo pivot by taking actors mostly known for their comedic chops (Joel McHale and Kevin James) to deliver a mostly humorless teen Rambo scenario that surprises with some brutal kills and refreshing deviation for James as an actor.

Attempting to reconnect with his teenage daughter Becky (Lulu Wilson), Jeff (McHale) hauls her to the woods to spend some time in their summer cabin. The weekend gets off to a bad start when Jeff invites his new girlfriend Kayla (Amanda Bruges) and her son Ty (Isaiah Rockcliffe), putting strain on his time with Becky. Things get worse when a band of escaped convicts with Nazi ties led by Dominick (James) descend on the home desperately looking for a key. The gang takes Jeff, Kayla, and Ty hostage while Becky tries to stay one step ahead of their tormentors to save the day.

James trades in his Segway and terrible stache for a full on Arian persona complete with shaved head, swastika tattoo on the back of his head and a bushy beard. Most of his career he’s been labeled as the loveable chubby schlub with roles like Doug Heffernan in King of Queens and of course, the butt of many jokes, Paul Blart. In Becky he sidesteps his typecast characteristics and plays his sadistic killer role completely humorless. At times though, it feels unintentionally funny watching him try to be quietly menacing. The filmmakers and James’s performance are never quite able to separate the actor from his comedic past.

These metatextual components are most noticeable in the writing. The script never stops to reflect on its cliched plotting and characterization, favoring instead to overplay the dramatic and villainous elements. By often trying much too hard to sell the “hardness” of Dominck, the character and thus, the movie, feels funny by accident. Admittedly there are some winking moments where being a bit silly seems to be the point. However, the dark and humorous elements don’t always blend well. The writers build a mysterious intent to why the criminals have descended on this particular cabin, which ultimately doesn’t go anywhere. This could be read as a bit of playful mythology intent on keeping the audience engaged and curious as to what the ultimate motivation of these characters is. How much mileage these more convoluted elements carry a viewer are up for debate.

What propels Becky forward is the brutal kills and chuckle-worthy nature of the violence being committed on hardened criminals and burly men at the hands of a teenage girl. Not that Becky is painted as a weak protagonist. Rather, the nature of the kills have a tinge of dark humor and while the setups are not wholly original, the execution hits hard—to the point you may find yourself clapping and cheering more than once. The direction of the film’s finale seems to purposely leave the audience wondering about the lasting impact on a teenager who witnessed and perpetrated horrific violence. But ultimately it’s hard to imagine that there’s really that much more for this movie to explore.

As surprising as Becky is, it can’t quite shake its cliches and while the movie is perfectly passable, verging on great, it’s flaws hold it back from being truly memorable. Still, it’s interesting to see an actor like James take a bit of a risk and play completely against type. With any luck he and many other comedic actors typically typecast will follow suit, resulting in more movies like Becky.