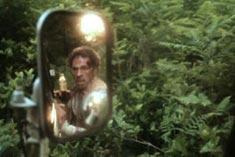 Rednecks that live in the woods are scary... it's just a fact. It's something that should definitely be added to those "everything I need to know I learned in Kindergarten" posters that teachers are so fond of hanging on their walls, because it was obviously lost on a lot of the people who went camping in the 1980's. I can confidently say that that bit of knowledge was lost on the participants in Jeff Lieberman's 1981 fear flick "Just Before Dawn," which turns out to be a funky mix of equal parts "Deliverance" and "Friday the 13th."

We start off in an old abandoned church in the woods, where two sloppy looking gentlemen appear to be trying to fix up the joint. The reasons why are never revealed, partly because their party is promptly crashed by a fat machete wielding redneck who offs the younger of the two fixer-uppers. The elder, witnessing the carnage, takes off into the woods in search of safety. Meanwhile a camper full of precocious 20 somethings goes trekking up the mountain on it's way to a plot of land whose deed has been inherited by one of the passengers. While on their way they ignore the warnings of the old grandfatherly forrest ranger (played by the always likable George Kennedy).

They continue on the road until they run into the fleeing man from the beginning of the film, who gives them an even more stout warning. "Demons!" he proclaims, demons have killed his nephew. Why is it that people giving these warnings can never be specific? I'd be willing to wager that the kids would have been more apt to believe him had he not stumbled out of the woods with a whisky bottle in his hand raving about "demons, but I digress. Ignoring a second warning, the group leaves the frightened man on the road and continues on up the mountain, only this time they've got a passenger with them, and he has no intentions of playing nice.

And so begins Jeff Lieberman's "Just Before Dawn," an interesting little oddity when it comes to early 80's slashers if only because to this day it remains fairly obscure (despite it's recent DVD release by Media Blasters). The rest of the film plays out fairly predictably. After a day or two of cavorting in the woods, the hikers split up for some very contrived reasons and that's when the shit starts to hit the fan. Granted, you could pretty much write the rest of the film yourself. It treads on pretty well worn slasher territory, but manages to rise to something a little more special, mainly because of Lieberman's spot-on direction. He shows an adept hand at creating suspense here and his shots are meticulously framed.

Almost all of the deaths have an impact even though there is no real gore in the entire film (a fact I found refreshing, considering the glut of "gorenography" cluttering cinemas today). With the exception of the first (and most brutal) slaying, we hardly see any blood either. In addition to the basic cat and mouse game being played out, Lieberman also throws in some other players to keep things interesting. You've got the none too friendly backwoods family who may or may not know what is going on, and the aforementioned forrest ranger, who spends a lot of the movie riding through the woods on his horse looking for the kids. Both of these elements give a sense that there's a little more going on here than just "killer stalks girl."

There are a few plot-holes though, like the fact that there's a vast expanse of woods and the killer(s) ALWAYS seem to be in the right place at the right time. The family dynamics of the backwoods clan are also a bit sketchy, the details of their existence sort of glossed over by a single line during the final reel. At a smooth 90 minutes however, these little inconsistencies are pretty easily overlooked because the affair is a fun one that's not too demanding of it's audience. This movie is sheer terror in the woods, with no complicated symbolism or plot details to muck up the proceedings.

I find it hard to believe that Lieberman is also the man responsible for the 70's killer worm flick "Squirm," an awful movie that has the dubious distinction of having spawned my favorite "Mystery Science Theater" episode, mainly because "Just Before Dawn" is so damn good. It manages to use almost every slasher cliche in the book while still adding something new to the pot and keeping everything extremely entertaining. The tension is palpable, which helped keep me sucked in to the story till the very end.

And oh what an ending it is. I was pretty shocked, not only by the way our heroine does away with the bad guy, but the fact that the way she did it was something I had never thought of before. Now THAT'S a feat. If you're into "Friday the 13th" and are looking for some more camp slasher fun, you'd be crazy not to check out "Just Before Dawn." That way, when it inevitably begins to be listed as a "classic," you can brag to your friends that you saw it ages ago.