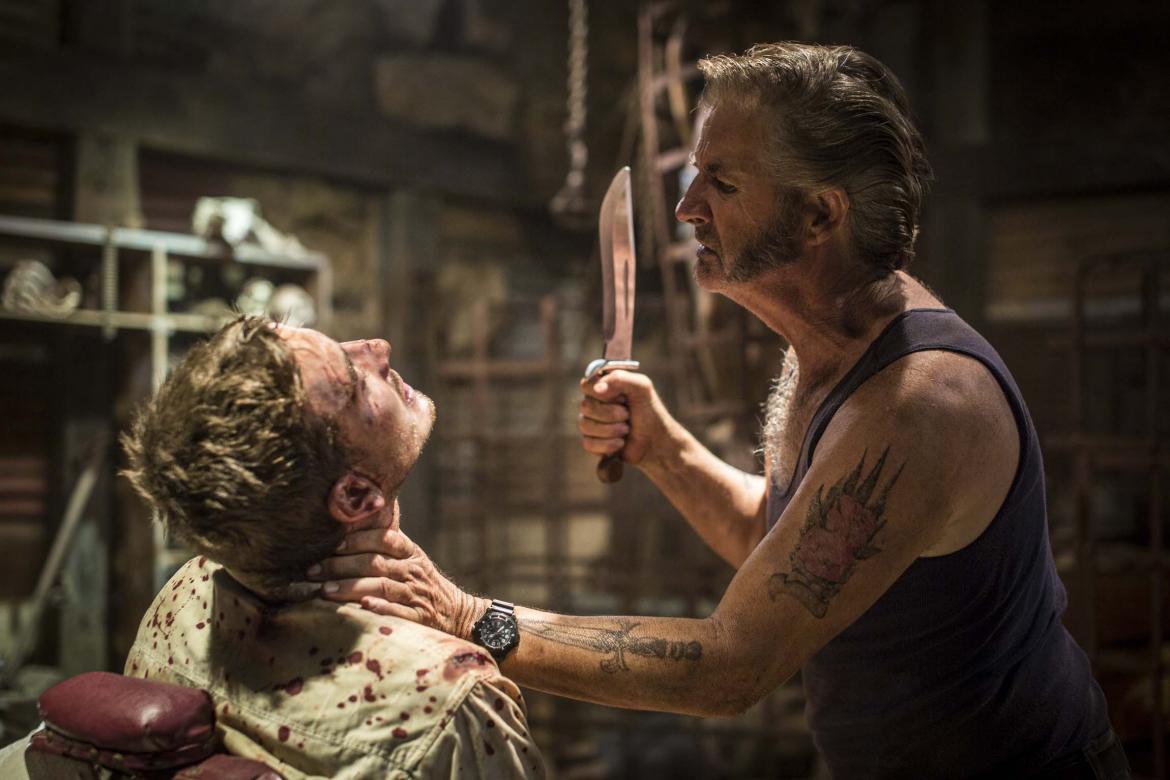 The promise of a sequel to a well received horror film can bring feelings of joy, but also concern. There have been many successful and well made sequels to strong films like Halloween II (1981), Aliens, and even Silence of the Lambs. Of course, there's a list of fairly forgettable or downright bad sequels to get through as well. Wolf Creek was a film that was very much on its own terms when it came to how it presented its story and characters. Releasing alongside films like Saw and Hostel it should have easily fallen into that torture porn fest to keep audiences tuned in. While it did contain severe violence, it maintained an air of mystery around the lead killer that harkened back to storytelling from the 70's. Now that the sequel Wolf Creek 2 has come to be, those promising feelings of a strong sequel are gone. Instead, what's left is an overexplained, boring, and tired retread of what the past decade of horror has created.

Actor John Jarratt returns as Mick Taylor, the sadistic outback killer of traveling tourists. The film begins with an attack on two policemen that attempt to pull Mick over, but inevitably set his anger loose which causes him to take them out. Most of the film runs this course. New characters are brought into the story with Mick followed closely behind; either attempting to "help" or "play some games". Eventually the lead character Paul Hammersmith (Ryan Corr) is introduced as the main adversary to Mick's attacks. After several deaths and escape attempts, Paul is kidnapped again by Mick and taken to an underground lair. There, Paul attempts to connect with Mick through his Australian history knowledge. A Saw-like game is created to see just how savvy Paul is with his Aussie history. Tricking Mick, Paul manages to begin an escape, only to be captured yet again with a very confusing ending thrown over it.

Overall, it feels very reminiscent of the Texas Chainsaw Massacre: The Beginning (reboot of the sequel) films pacing and choices. There is more of an attempt to explain Mick's pathos in the story which is instantly a "hitting the breaks" inducing choice. What made the original Wolf Creek so creepy was Jarratt's mysteriously friendly but horrible portrayal of Mick. Leaving some ambiguity on villains is necessary because it allows more fear to be created by the viewer of what they may do next. Once their reasonings and plans become clear, its like a roadmap for killing that isn't too exciting to travel. The most frustrating aspect of the film is its steps back to scenes of torture. In the original, they were peppered in the story which raised tension and feeling for the characters undergoing them. This film establishes that Mick is the star, so every scene of torture says that we should be invested in what he is doing and not the victim's pain. By the end, there is an attempted twist but it is merely head scratching. It raises so many questions that will likely never be answered. Ultimately, Wolf Creek 2 is an unfortunate, failed attempt to make Mick Taylor an iconic killer for a new generation.