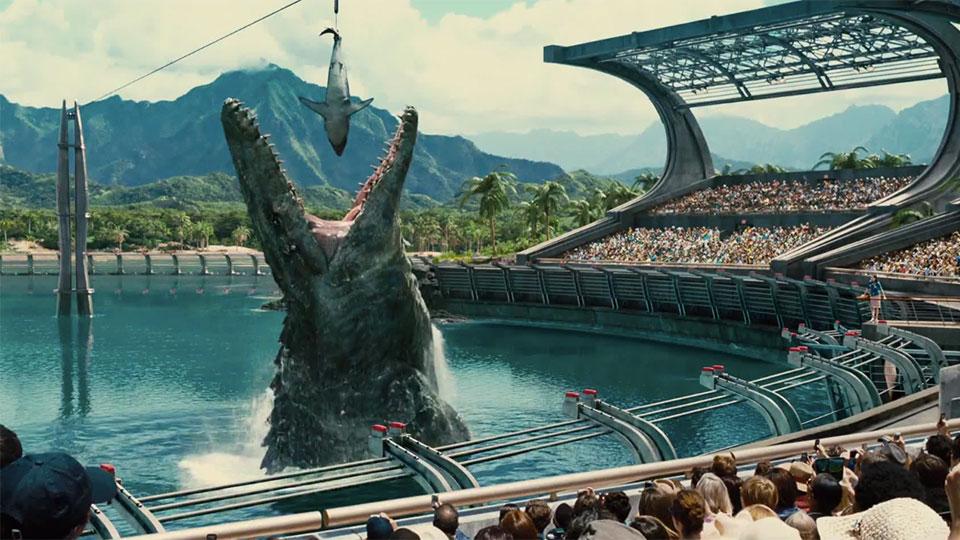 It was twenty-two years ago that the world was taken to a new and unexplored world with the release of Jurassic Park. What began as another summer blockbuster for director Steven Spielberg quickly became a phenomenon that continued his signature genre melding style of adventure meets B-level monster flick. A theme park focused around the creation of dinosaurs was the prehistoric zoo that no one knew they needed. With a story that gave all types of viewers the chance to feel terror and excitement, as well as an iconic score from John Willams, Jurassic Park delivered a package that redefined the creature feature. Now, over two decades later, the park has reopened and this time its dealing with audiences on a global scale. Jurassic World attempts to recapture the heart of the original film while also reinventing the theme park theme to fit with the current zeitgeist. Bigger is better, more ferocious is key, and there's no such thing as too much product placement are all mauntras that line the foundations of Jurassic World. While the film has its missteps in attempting to outdo its forebearer, the transition from park to world is just as joyful but surprisingly more sinister.

John Hammond's original vision for a theme park that brought the prehistoric world to life may have failed at its first trial run, but years later the new Jurassic World has been making that dream a reality. Isla Nublar has now been home to the exanded vision of Hammond's Jurassic Park for ten years. With a decrease in park visitor satisfaction and overall excitement, the new owner Simon Masrani (Irrfan Khan) has taken drastic steps to invigorate the jurassic brand. Claire (Bryce Dallas Howard) as head of park operations has the heavy task of delivering a new attraction to Jurassic World that will shock visitors and draw in enough anticipation to keep revenue flowing. On the final days before revealing this new attraction, Claire's nephews Zach (Nick Robinson) and Gray (Ty Simpkins) come to visit the theme park despite a seven year gap of any interaction between the family members. On top of it, her one time date Owen (Chris Pratt) has been called to consult on the new attraction due to his vast understanding of confined dinosaur's behavior. As Owen begins to unravel what exactly this new attraction is, his fears of its potential become realized when the hyrbid beast performs an escape from its paddock. The hauntings from Hammond's original Jurassic Parks failure come rushing forward for Claire as the hybrid creature tears through the park, headed straight for the visitors that requested its existence.

The danger of creating a new iteration in a long dead franchise, and arguably a series that should have ended at part one, is balancing a referential tone with a new storyline. Its important to refer back to moments from the original that worked well and gave it the magic that audiences will always remember. The first time the T-Rex comes stomping into the parked Jeep's pathways in Jurassic Park is an unforgettably terrifying yet enjoyable moment. Moreover, the first "Welcome to Jurassic Park" as the Williams score swells over the establishing shot was a creation of not only a great film but an iconic one at best. Jurassic World attempts to reach those levels of fascinating wonder and in some moments does succeed, while other efforts are harder to swallow. The dialogue about visitors not being impressed with just dinosaurs anymore felt almost too meta and critical against naysayers of the new film. However, when Jurassic World stops trying to be Jurassic Park it finds a groove that doesn't disappoint. The introduction to each different area of Jurassic World brings a broader understanding of how this idea of a theme park has managed to work for a decade. The Mosasaur leaping from the water Shamu-style to eat a great white shark is its own brand of cool that sets itself up to be used again throughout the films run. One of the harder aspects to swallow was the training of the raptors by Pratt. Raptors were arguably the most terrifying creatures in the original film, so to possibly strip away their malevolent tendencies was disheartening. However, the film flips that concept around and delivers an interesting plot device of who or what the alpha leader of them will be. Along with that possible fear, the film does not relent in terms of violence. When the dinosaurs begin to escape and seek victims in a crowd of unsuspecting visitors the action and violence hit turbo. The most gut wrenching attack coming with the reuse of the Mosasaur set up previously. What sets Jurassic World apart the most is its sense of pride in the more violent and horrific side of the story; a sense that works extremely well.

The overall plot of the film feels labored from the start as different characters seek to give reasons for the existence of the hybrid dinosaur. Ultimately it comes back to the meta approach of "audiences want something new to fear", and while it does feel a little pandering, the concept essentially works once the action begins to unfold. The true villains of the park that are revealed don't get completely resolved leaving the possibility for a sequel, or the hint that the screenwriters just didn't think to tie up that loose end. The performances all work well, with heavy nods to Pratt and his lovable smarm. The effects also showed the modern touch that would justify a new film in the series to begin with. In the end Jurassic World may not be the Classic Coke that Spielberg first created twenty years ago, but it is the Coke Zero of the series; similar ingredients with a different taste.