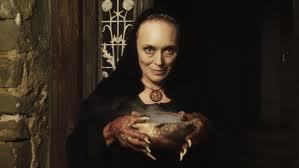 As horror anthology films go, “The Theatre Bizarre” may be the most varied. Most short films in anthologies have a similar theme, or at least tone. Not this one. From subtle to outlandish, from supernatural to psychological, “The Theatre Bizarre” is all over the map. This isn’t necessarily a bad thing, some of the shorts are quite good, just know you need to bring an open mind.

Let’s start with the framing device, “Theatre Guinol,” directed by Jeremy Kasten. There’s not much to this story, a young woman walks into a rundown theater and watches a ventriloquist dummy on stage grow more human as the film goes on and it presents each of the stories that follow. This is interesting only for the acting of Udo Kier playing the puppet. He hams it up well, and the other characters on stage are interesting to look at, but you see where this is going from a mile away.

“The Queen of Toads,” directed by Richard Stanley, is the most traditional horror story in the “The Theatre Bizarre.” It’s also not very good. “The Queen of Toads” is about a couple vacationing in rural France. He’s looking for an original copy of the Necromonicon, she’s looking for a spa, and as you can imagine they spend some time bickering. They run into an old gypsy woman who says she has a copy of the Necromonicon to show off and… you get the idea. The effects look cheesy, and the acting is wooden. If you pick one film in “The Theatre Bizarre” to fast forward through, it’ll likely be this one.

Things pick up with the next story, “I Love You,” directed by Buddy Giovinazzo. This one is about a couple at the end of their relationship, and things devolve into violence and worse. “I Love You” is dialogue heavy and somewhat slow, but it does a good job building tension. The film takes place almost entirely in one room, and relies on strong acting from André Hennicke and Suzan Anbeh. The ending is predictable, but it’s a fun watch.

“Wet Dreams,” directed by Tom Savini, tells of a cheating husband who has nightmares of being castrated. Unfortunately the story and dialogue reminded me of a mediocre episode of “Tales from the Darkside.” About the only thing “Wet Dreams” has going for it are some outlandish practical effects (not surprising considering it was directed by Savini).

“The Theatre Bizarre” takes a hard left turn with the next segment, “The Accident.” Directed by Douglas Buck, this film is by far the quietist of the bunch, in fact it could hardly be called horror at all. It is the story of a mother and young daughter sharing a conversation about death after they witness a motorcycle collide with a deer. Nothing much happens in this segment, but the simple imagery of death seen through the eyes of a small child is quite powerful.

With the last two short films, “The Theatre Bizarre” turn up the gore and cringe-factor. “Vision Stains,” directed by Karim Hussain, is about a woman who injects fluid from dying women’s eyes into her own eyes to witness their last thoughts and feelings. The ending doesn’t make much sense and there is an irritating voiceover throughout this one, but watching a needle get injected into an eye over and over again is squirm inducing.

And then we get to the last segment. “Sweet” was directed by David Gregory, and was my favorite part of “The Theatre Bizarre.” It is a sickening tale of a couple who share a food fetish and are breaking up. I loved the simple imagery and palette used by Gregory to separate the gloomy breakup scenes with the bright colorful past, and the ending was over the top gory fun.

As a whole, “The Theatre Bizarre” is hit and miss, but what anthology film isn’t? Even the misses offer something worth watching, however, and if you don’t like one short film you don’t have to wait too long before it’s over and you’re on to the next one.