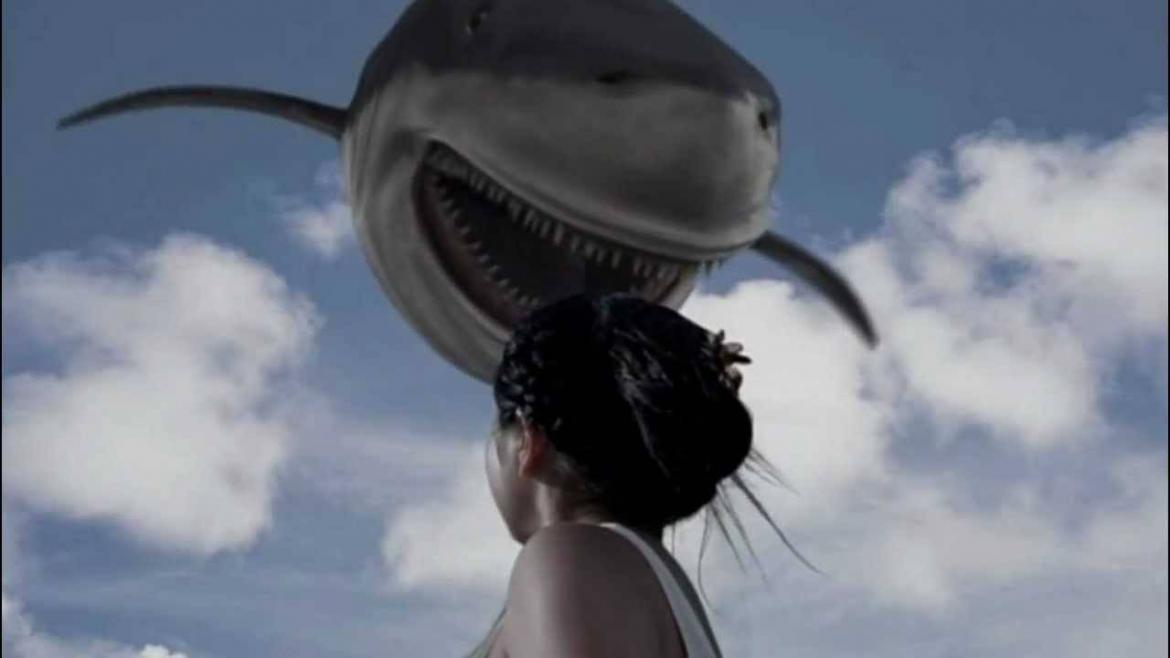 Word association time! Quick, what’s the first thing that comes to mind when you hear the words ‘psycho’ and ‘shark’? Is it a psychotic, possibly rabid shark terrorizing tourists on a beach? Maybe a psychic shark that can somehow communicate via telepathy and lure victims to the beach and to their demise? Or maybe some kind of crazy half-man, half-shark hybrid that’s killing a bunch of coeds? Personally, I was expecting some sort of giant shark movie, but maybe that’s because I saw the DVD cover with a giant shark about to swallow a woman on a raft whole. Well, I can guarantee you’re all wrong. Surprise, surprise! “Psycho Shark” is actually Japanese found footage film, that’s essentially one hour of bikini models frolicking on the beach or watching tapes of other bikini models frolicking on the beach and ten minutes of some of the most batshit crazy shit I’ve ever seen in a film.

“Psycho Shark” is a surprisingly confusing film. Usually these kind of shark attack films are incredibly straightforward and one dimensional, but there are some strange chronology jumps and unexplained plot points that made this a difficult film to follow. We open with some camcorder footage of some bikini models frolicking on the beach in Okinawa. There are some flashes and we see quick cuts of the models dead in the water, surrounded by blood. Intercut with all these flashes, are some images of another Japanese woman, staring into a television set in horror. We never learn who this woman is, despite her showing up again at the end. So it goes.

We’re then introduced to our protagonists, Miki and Mai, who are vacationing in Okinawa. Much like the earlier women, Miki and Mai also have incredibly large breasts. This is about as much character development as you’re going to get here. The film then shows such intensely gripping dramatic scenes such as “Miki and Mai film each other changing into their bikinis”, “Miki and Mai film each other playing in the water”, “Miki and Mai take multiple showers independently” and, my personal favorite “Miki watches camera footage of the previous group of large chested women do the exact same thing we just watched Miki and Mai do”. I swear, whoever made this film has to be the most sexually frustrated man on the face of the planet. There’s no other way of explaining why at least 90% of this film is just women with large breasts swimming or bathing or insane cleavage shots. It becomes comical after a while.

The film tries to address this point, but the explanation for it is comical in of itself. In a quick throwaway scene, Miki and Mai are told by the manager of the hotel that they’re staying at that every room comes with a complimentary camcorder. Oh, well that makes sense. Logically, like I’m sure everyone would do, they then use this camcorder simply to film each other in their bathing suits for the remainder of their vacation. So did the previous group of women did, who happened to leave their tape behind in the room. The “plot” of this film, comes from Miki sitting in her hotel room watching this other tape while is off flirting with a guy on the beach. Let me tell you, these scenes of Miki watching this tape are hands down, the single most riveting scenes of someone sitting on the floor watching home video footage repeatedly that I have ever seen in any film. And by that, I mean I wanted to tear my hair out after twenty minutes.

Slowly, and I do mean slowly, Miki realizes that there might be something up with the guy Mai is hitting on. Unfortunately for us, the three or so minutes of actual plot are sandwiched between 57 minutes of the most boring and obnoxious exposition I’ve ever seen. Imagine the party scene from “Cloverfield” (a movie I love by the way), but strip away any personality from the characters, remove any character development and then stretch it out for an hour. Oh, and add lot’s more cleavage. And some inexplicable ghost shit that’s never explained. Then jumble up some of it chronologically for no reason. That’s the first hour of this movie.

I was just about set to give this film a 1 and move on, but then, something magical and completely unexpected happened; I got to the ending of the film. Let me say this now before I get into the ending. The 4 points I’m giving this movie stem solely from the final two minutes. And honestly, I’m not sure if I would have enjoyed the ending as much as I did, if I didn’t sit through the first excruciatingly painful hour of this film. That said, the final two minutes of this movie had me laughing harder than almost any other film I can think of. I seriously had to muffle my laughter with a nearby pillow. Maybe the ending of the Nic Cage “The Wicker Man” remake came close to this, but I’m not even sure of that. If you want to experience this movie the same way I did, stop reading now. Having seen the entire film, I can tell you that the immensely boring first hour is actually the setup for what is one of the best cinematic punchlines I’ve ever seen.

Seriously, if you have any interest in experiencing this, stop reading now and track down a copy of this.

Still reading? Welcome back. Anyway, in the final ten minutes, we discover that Mai’s new beau has been sacrificing women that come to Okinawa to feed to a ridiculously enormous shark. We’re talking a Titanic sized shark at least. It’s stupid big. Miki tries to save Mai from being sacrificed, when, it what might be the worst shark related CG I’ve ever seen, this ridiculously huge-ass shark leaps out of the water and devours Miki in the middle of a kamikaze plunge from the air. All while crazy power metal is playing. It is, without a doubt, the stupidest scene I’ve ever watched and I loved every second of it.

So that’s that. “Psycho Shark” is a terrible movie. It’s one of the most boring and slow films I’ve ever seen, yet that boredom lures you into a calm stupor. You’ll be sitting on your couch, waiting for the pain to end, when out of nowhere, you’ll see one of the stupidest things ever filmed and you’ll love it. Honestly, I’ll never watch this movie again. However, the experience of watching this movie, hating every second of it and then watching it implode into ludicrous self-parody was one of the most unique and entertaining film experiences I’ve had in a while. It’s going to take a very specific type of person to be as entertained by it as I was, but if you’re one of those people, you absolutely have to catch this piece of shit. If you’re not, just go search for “Psycho Shark - The Best Scene” on Youtube. The punch line might not have all the punch it does with the build-up, but I’ll guarantee you laugh. You won’t regret it.