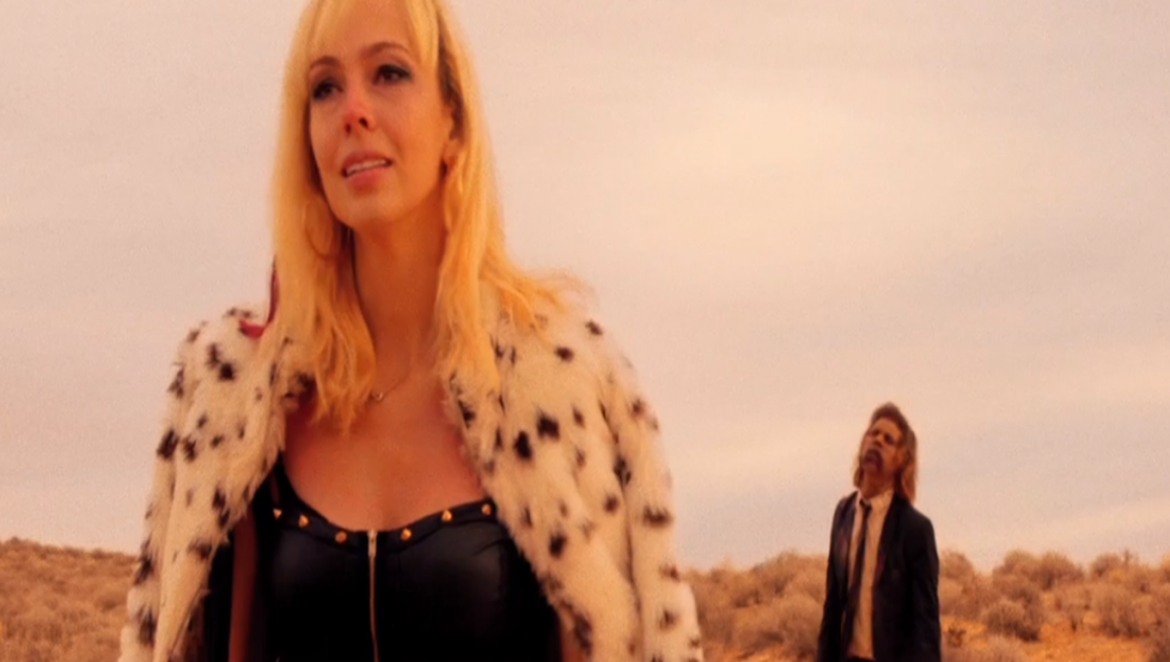 Zombies aren’t always thought of for their flexibility, but few things can match their ability to bend to the vision of filmmakers, enabling stories that are sprawling or deeply personal, humorous or tragic, action-packed or terrifying. In It Stains the Sands Red, director/writer Colin Minihan and his co-writer Stuart Ortiz seek to use the zombie as a catalyst for private redemption. While the idea of a lone zombie’s relentless pursuit of a party girl across the Las Vegas desert inspiring momentous life changes in her is an excellent start, the journey that follows is less than satisfying.

After a stray zombie (Juan Riedinger) kills her boyfriend, Molly (Brittany Allen) is left stranded in the middle of nowhere. Armed with some sunscreen, a few bottles of water and the world’s most reliable smartphone, Molly must make her way on foot toward salvation in the form of a flight to Mexico. However, that zombie, whom Molly nicknames Smalls, isn’t a quitter – and he’s still hungry.

Minihan and Ortiz seem intent on making their movie in the minimalist stylings of The Shallows. For much of It Stains the Sands Red, the only thing they give Molly to interact with is the snarling Smalls. The scraggly-haired, be-suited zombie may have eyes on turning Molly into a meal, but it’s she who ends up turning him into something. Small becomes her therapist much in the way that pets often do, an audience upon whom we can dump our frustrations while it waits patiently for us to stop talking and feed it. It’s a clever turn, but it’s one Minihan, Ortiz and their leads struggle to fully execute. The acting chops, and worse, the writing chops aren’t there. As such, the film becomes overrun with hastily-executed and needless detours, inexcusable breaks from logic, and seemingly endless, tedious sequences of just walking.

It doesn’t help that Molly’s connection with Smalls is unceremoniously set aside when it’s time for her grand redemption, which is more sigh-inducing than triumphant. Rather than allow her to grow for herself, as her own character, Miniham and Ortiz saddle Molly with a tacked-on mommy-guilt complex. It’s a shame that for her, self-actualization can’t be achieved without haphazardly dragging a child into the picture.

It Stains the Sands Red deserves credit for finding yet another unique and interesting way to leverage zombies as a storytelling device. However, over the course of the film’s 90 minutes, that initial promise is set upon by middling acting and far worse creative decisions. While not quite enough to kill the film, It Stains the Sands Red is a bit of a shambling, bloody mess by the time the credits roll.