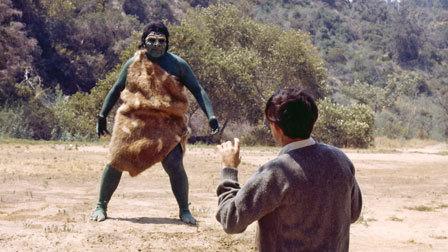 Picture this: a collection of film geeks barely out of their teens set out to make an ultra-low budget horror film. The movie is about four kids who set off for a weekend at a secluded cabin deep in the woods, where they find a musty old book of magical lore which unleashes the forces of evil; possessions and bizarre creatures ensue. After shooting their ramshackle movie, the film geeks find themselves going on to long and storied Hollywood careers, earning awards and working on gigantic and much more “respectable” movies. Sounds familiar, right? The thing is, the movie is not “Evil Dead”, as a lot of fans might expect, but rather a movie which came out a full decade before Sam Raimi and company ventured into the piney forests outside of Morristown, Tennessee. This movie is called “Equinox”, and it’s possibly the most significant milestone in modern horror movies which hardly anyone today, including die-hard horror freaks, has ever even heard of.

“Equinox” had its genesis in the back pages of a 1962 issue of Forrest J. Ackerman’s Famous Monsters of Filmland. A teenager named David Allen had placed an ad trying to hook up with fellow King Kong aficionados. Through this ad, Allen met Mark McGee and Dennis Muren and over the next few years the three watched horror and sci fi movies together and eventually began to make their own Ray Harryhausen-inspired stop motion creatures. Five years later, the trio had produced a short film showing off their homemade special effects. This short attracted the attention of “The Blob” producer Jack H. Harris who recut it, shot some additional footage to bring the movie up to feature length and released their $6,500 backyard film to the big screen. Forry Ackerman even brought things full circle by doing some uncredited voiceover work in the movie.

Watched today, “Equinox” is still charming fun. Granted, the amateurish vibe combined with its age make it at first glance seem like a movie that’s begging for the MST3K treatment, but once the special effects kick in it’s hard to fathom that some kids in the 60s with a Bolex camera could put this together. There’s a Cthulu-esque tentacle monster destroying a cabin, an extended fight scene against a 10 foot lizard-ape creature, a green giant caveman smashing stuff and a winged red devil which looks like it flew off the cover of some disreputable metal album from the 70s. The movie barrels right along with a giddy sense of fun and heedless experimentation that can be infectious if you are in any way susceptible to the charms of old-school stop-motion animation. Sure, the teenagers sometimes talk like they’ve just come from hanging at the malt shop with Archie and the Scooby gang and the acting tends to fall somewhere between passable and laughable but, if anything, the pure, uncut goofiness only adds to the joy.

“Equinox” was a staple on late night 1970s television, but for some reason it later fell between the cracks, only receiving a limited VHS release on Wizard Video under the title “The Beast”. The film was mostly unseen and forgotten until the Criterion Collection debuted it on DVD in 2006. At the time, many cinephiles were no doubt confused as to why a practically unknown low budget horror film shot by kids could earn such an honor, until they realized that a few years after making this movie one of those kids (Dennis Muren) would revolutionize the special effects world with a movie called “Star Wars” and go on to become the driving force behind Industrial Light and Magic, while another one (David Allen) would become Hollywood’s go-to guy for stop motion, working on everything from “The Howling” to “Honey, I Shrunk the Kids” to just about every movie on Charles Band’s Full Moon Entertainment label.

“Equinox” will not connect with everyone. It’s campy. It’s dated. Characters’ hairstyles and sideburn lengths will change indiscriminately from one scene to the next. Lots of people will only be able to see “Equinox” as a joke, as a hokey relic from the past that today’s slick special effects and astronomical film budgets have largely made redundant. What those people are missing is that “Equinox” is much more than the sum of its parts. It was a film school where significant talents in modern special effects were first honed and crafted. It was a labor of love where sheer unadulterated fandom manifested itself in the form of a creature feature. And in turn, it became an inspiration. Just like Muren, Allen and McGee were geeking out over their fandom of the UFO and monster films they’d watched in the 50s and 60s, their film would go on to inspire the next generation of geeks in the 70s and 80s to pick up a camera and go make their own damn film. “Equinox” is a piece of history that deserves its place in the pantheon of mid-to-late 20th century horror as one of the forbearers of the modern independent scary movie.

Fist Of The Vampire