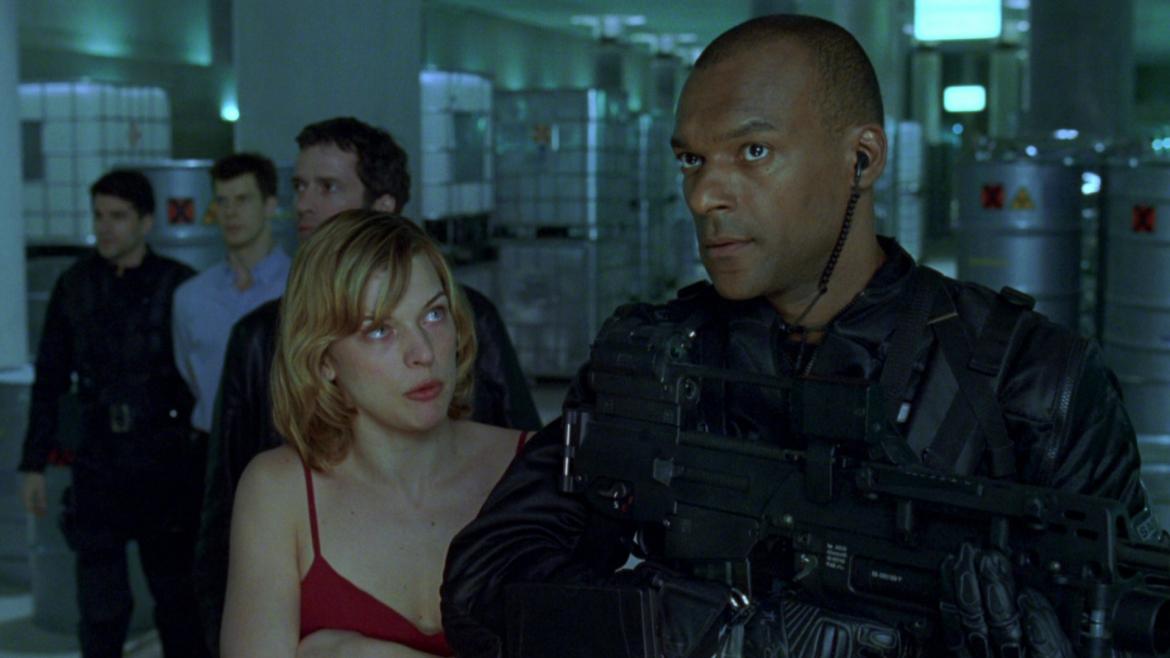 The journey from videogame console to the big screen isn’t easy, but 2002’s Resident Evil fares better at it than most. Sure, it garnered hordes of creative barbs from mainstream critics. Also, there’s the wrath of the fanboys and fangirls for whom the movie will never top their beloved games. Still, taken on its own merits, Resident Evil works as an energetic, nu-metal-fueled if too-tame addition to the zombie canon.

For the most part, as viewers, our entrance into the world of Resident Evil is Alice (Milla Jovovich). She wakes up in a mansion with no memory and is immediately swept up in a team of high-tech commandos on a mission to infiltrate a secret underground research facility called the Hive. We learn along with Alice that something went horribly wrong in the Hive, the commandos are there to clean things up, and her house is actually a façade used to mask an entrance to the facility. The commandos and Alice share the same employer – the Umbrella Corporation, a company which specializes in all sorts of shady doings, including genetic experimentation. Inside the Hive, they find it overrun by a homicidal supercomputer, zombies, and some of Umbrella’s other secret projects.

On the action-horror scale, Resident Evil falls closer to the action side. It’s George Romero by way of James Cameron. As a result, it’s light on the scares but big on scenes of military types firing very-impressive-looking weaponry into swarms of the undead. And because the film was shot in a post-Matrix world, there are also the requisite (and tired) wirework fight sequences and shots of bullets traveling in super slow-mo.

There are a few moments of tension that, while heavily-manufactured, do work quite well. The manufactured part comes from the fact that the tension makes no sense if you stop to think about it. At one point a handcuffed character faces down a sea of zombies while he tries to dig the keys to the cuffs out of a floor drain. Somehow he manages to do this at the very last second with only the tips of his fingers. Does he have Stretch Armstrong fingers or is that the world’s shallowest drain?

One thing missing from the film’s action sequences and set pieces is the visceral payoff. Resident Evil is too tame for its own good. It’s an odd choice by writer/director Paul W.S. Anderson, especially considering how many near-iconic kill sequences – the hallway laser grid, the speeding elevator – he includes. Sure, zombie movies don’t have to be gore-fests, but Anderson almost seems to be going out of his way to avoid getting his hands dirty. Perhaps it’s a creative choice rooted in the slick and styled approach of early 2000’s era horror – still it does Resident Evil no favors.

What Anderson does exceptionally well with Resident Evil is take a bunch of familiar horror tropes and characters and repackage them in an inoffensive and breezily-paced package. Viewers known these characters and they know these set ups and they enjoy them. This makes Resident Evil a movie that is all at once safe, derivative, and yet remarkably hard to dislike.