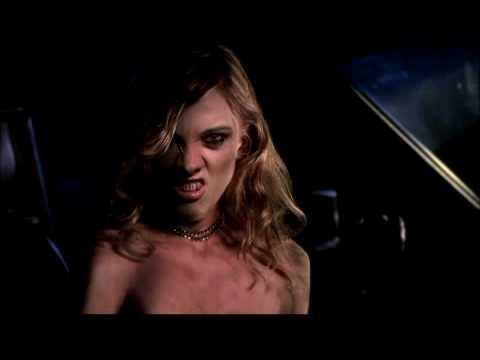 On very rare occasions a film will leave me speechless. Sometimes, it’s because the film was so good. The first time I watched “No Country for Old Men” I sat in the theater for five minutes just soaking everything I just saw in. Sometimes, a movie will be so crazy and off the wall I’ll be stunned at what I just saw. “Eraserhead” comes to mind. But this was a new experience for me. This was the first time I’ve seen a movie so bad on so many levels, that I’ve been stunned that I just watched what I watched. Make no mistakes, “Hyenas” is a complete, abject failure. It fails at every aspect of film-making, writing, acting, special effects, just everything. However, it manages to be so bad, that it’s almost worth watching just to experience how awful a film really can be.

Brace yourself, because things are about to get real stupid.

The plot of “Hyenas” revolves around a gang of shape-shifting ware-hyenas. Why hyenas and not wolves? I don’t have a clue. As far as I can tell the only reason is so the film-makers had an excuse to use a laughing sound as the cue for the hyenas. Only problem is, the laughing cue they use is so bad, so cartoony and so poorly dubbed in that it just sounds like they used some child’s Speak and Spell to come up with the effect.

These ware-hyenas apparently roam the country-side, driving people off of roads and then transforming into hyenas to eat their prey. Unfortunately for these hyenas, they fuck with the wrong D-Lister and kill Costas Mandylor’s wife and child. That’s Detective Hoffman of “Saw” infamy for those not in the know. If you’ve somehow avoided “Saw 3” through “Saw 7”, never fear. Mandylor does you the service of playing the same exact character in this film. That, or he’s so emotionless and inhuman that he can only play one character, flat and dimensionless. After losing his wife and child to the hyenas, Detective Hoffman vows revenge and dedicates his life to tracking down and killing every last ware-hyena in the gang.

Lucky for him, he’s got a posse. Totally inexplicably, Mandylor meets up with a dude that I swore was Booker T of old-school WCW fame for a solid 20 minutes in a motel parking lot. After looking it up on IMDB, turns out that it wasn’t Booker T, but Meshach Taylor, best “known” for his role in “Designing Women”. How it happens wasn’t really explained, but whatever. Anyways, Meshach’s character, Riggs, plays double duty here as both Mandylor’s partner and our unexplained narrator for a few scenes where the writer couldn’t find a way to write some exposition. Yeah, the writing here is pretty lazy.

For whatever reason, this film also has a B-story running through it that never ties into the rest of the film. We’ve got a group of the town’s teenagers that are locked into some sort of unexplained turf war with a group of hispanic teens. Their scenes devolve into some pretty seriously racist shit, becoming nothing but a way to fit a ton of ethnic slurs against hispanics into this movie. The hispanic gang never play a role in the film, other than being the butt of these slurs. It’s totally, completely, 100% pointless.

But that’s only scratching the surface of this film. There is absolutely nothing about this film that makes any kind of practical sense. The special effects are the worst I’ve seen. Period. Seriously, they’re a step-down from claymation. And strangely, the film revels in them. You’ll see these awful transformation scenes over and over and over in total detail. They never try to hide their poor budget. There’s literally scenes where they forgot to add the CG’ed backdrop in. It’s hilariously, awesomely bad.

This whole film revolves around reveling in poor decisions. Despite needing someone who could convincingly act out the pain of losing their family, they cast Costas Mandylor and still had him try to act out in pain. The end result? Some melodrama that rivals Tommy Wisseau’s turn in “The Room”. They then hired actresses that apparently didn’t want to take their tops off on camera (which is cool, I’m not lamenting that fact). However, they then went and made the decision to have every transformation scene with a woman require her taking her clothes off. The result? A lot of computer-blurred out nipples. It’s hysterical, especially at the end when two female hyenas face off, but first have to dramatically remove their tops to expose foggy nipples.

Side note: I’m really sad that the podcast guys stopped doing the Google Report. “Foggy nipples” totally would’ve made it.

Whether or not you’ll enjoy “Hyenas” comes down to how much you like crappy movies. If you can’t get into something like “Troll 2” or “The Room”, don’t bother. However, if you can, it might be worth it to check this film out. While there’s some long stretches that are pretty boring, I was afraid I was going to wake my neighbors up come the end. If you’ve got nothing better to do, grab some friends (and some beer, that part’s vital) and give this a shot. You might end up drowning out the hyena laughter with your own.

Plankton (Creatures from the Abyss)