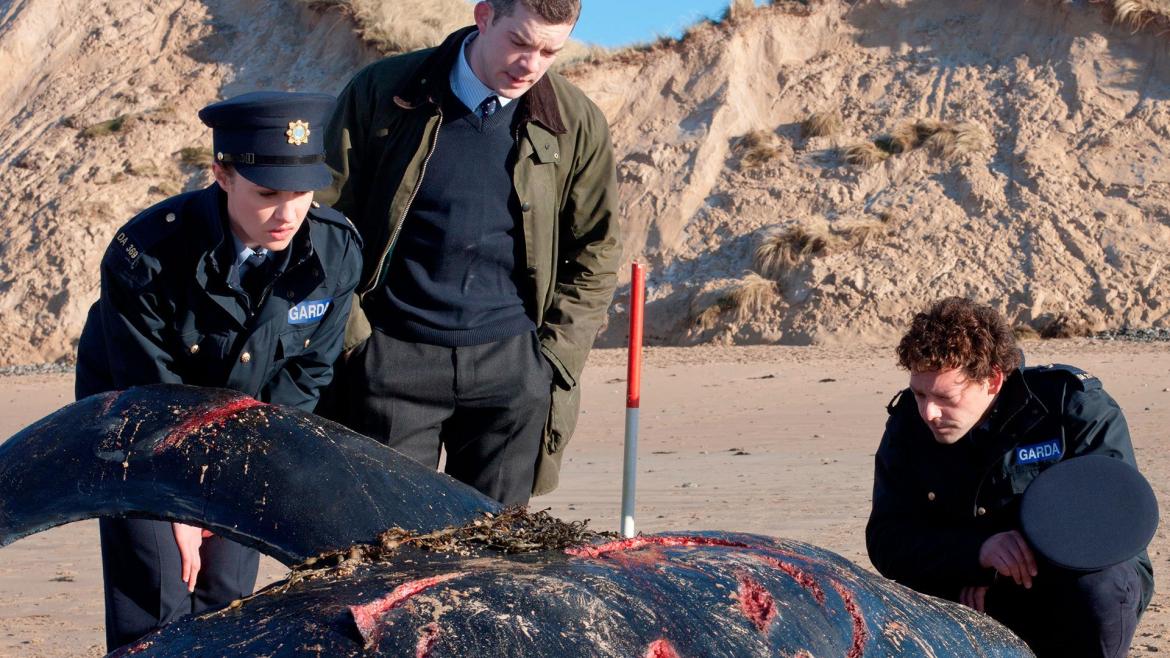 In just about every monster movie, the monster has a weakness; some imperfection or flaw in the creature that the heroes must exploit in order to survive. Sometimes, this could be something as benign and ordinary as an explosion (or gravity), in the case of Tremors, or something specific like Zeke’s mystery drug supply in the case of The Faculty. In Grabbers, the weakness could not be more stereotypically Irish. The monsters are “allergic” to alcohol.

This horror comedy takes place on a small island off the coast of Ireland, which is left all but uninhabited in the offseason.Garda Ciaran O’Shea (Richard Coyle, Prince of Persia) and Garda Lisa Nolan (Ruth Bradley, Flyboys) assume they’re in for a few weeks of routine quiet when some strange things start happening. Not unlike other monster movies of this sort, a few small weirdnesses pop up here and there, but things escalate quickly.  A few dead whales wash up with strange markings on their bodies, but then people start to go missing. After the town drunk brings in a slimy blue monster he accidentally caught while fishing, a local scientist (Russel Tovey, Being Human) suspects they are dealing with some heretofore undiscovered species of animal and a ragtag crew begins to form

After some tests, Dr. Adam Smith (Tovey) discovers that all the creatures need to survive is blood and water and, being in a seaside town, both of those things should be easy to come by. With all inhabitants of the town now in danger of becoming part of a giant blood buffet, time is of the essence. By some happy accident the team discovers that the monsters seem to die when the blood they consume has a high blood-alcohol content, and they devise a plan. All they have to do is get the entire town to the local pub where they start feeding them alcohol while they wait for the inevitable big showdown.

Grabbers takes an old formula and tries something new and different with it. Setting up alcohol as the monster’s achilles’ heel, while specifying that the alcohol must be ingested (suggesting that everyone on the island has to get wasted) does lead to some pretty great scenes. For example, you have a scene where O’Shea and Nolan head to the church to inform everyone about to leave the service that there will be a party at the bar and everyone has to come. And, more notably, we also get to watch the final face off between monsters and heroes with most of the heroes completely sauced. Watching one group of people is trying to barricade the door to the bar while another group is trying to set up a homemade flamethrower, with neither team proving to be particularly successful, was a highlight.

All I can say is with all of the alcohol mixed with adrenaline, that’s going to be one hell of a hangover.