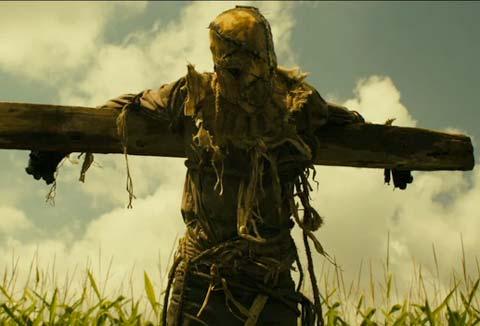 About a half hour into this film I was beginning to wonder if I had put the wrong movie into my DVD player. I could swear that the DVD box said “Husk”, yet I was pretty sure that I was watching the “Texas Chainsaw Massacre” remake. There was the group of teenagers on a road trip whose car broke down, the creepy dilapidated old house surrounded by the old cars of previous victims, the psycho killer making a mask while hunched over a sowing machine and lot’s of chases through fields at night. Only I didn’t remember there being so much corn or crows in the “TCM” remake and R. Lee Ermy was sadly nowhere to be found. Eventually I figured it out and realized that the film I was watching was indeed this “Husk” movie, though I can understand why I was so confused. This is a film that attempts to do little, if nothing, to differentiate itself from the multitudes of direct-to-DVD horror films cluttering the aisles at your local video store and as a result leaves little lasting impression and will be quickly forgotten.

“Husk” begins like so many horror films do, with a group of teenagers on some sort of road trip. Of course, because this is a horror film, our group of protagonists can’t actually make it to their destination. As such, a group of crows kamikaze their van, forcing them off the road and into a ditch near a cornfield. When everyone comes to, they realize that one of them is missing and that he’s seemingly taken the keys with him. What a jerk. So naturally, because this is a horror film, the group splits up and goes into the corn field in search of their missing friend, or maybe just the keys. Who knows? The cornfield happens to be filled with creepy looking scarecrows that smell really bad. Maybe because there’s corpses inside? They wouldn’t make it that obvious, would they? Nope, they did. There’s also a bunch of cars with similarly dive-bombed windshields and a really creepy house. Again, because it’s a horror film, it’s has to be run down and dilapidated. It couldn’t possibly be be a nice looking house or something unexpected like that, now could it?

Two of our teens make their way into this house and check out the upstairs where they saw a light on earlier. Now because this is a horror movie, they don’t find the homeowner, but rather they find their friend, with nails jammed into his fingers, covered in blood and hunched over a sowing machine making a scarecrow mask. They soon hear the screams of their friend, who is outside in the cornfield, being attacked by a similar creature. When they run down to rescue her, they find out that the cornfield is filled with scarecrow monsters that are hunting them down, one-by-one, and converting them into more killer scarecrows.

Where most films will have something that drives the action (one character’s love for another, a character’s personal quest, etc.), the only thing that drives this film is the fact that it’s a horror film. Why do the crows divebomb the van in the beginning? We’re never given an explanation, but it’s a horror film so something had to happen. Why does one of the characters have psychic flashbacks while walking around the farm which explain the film’s backstory? We’re not really given a reason, but that kind of thing happens in horror movies. Why does the body of a murder victim reanimate as a scarecrow and murder innocent victims instead of seek revenge on his murderer? Well, that doesn’t really make sense even in a horror film. Подробная информация про http://slotmasters-ua.com/ и перейти поиграть можно по этой ссылке.

That’s this film in a nutshell. Everything that happens here is either ripped off from another film or is a standard trope of the genre. It gets worse. Later on there’s the forced conflict between one of the remaining survivors and the rest because he wants to get his girlfriend back, despite the fact she’s now a homicidal scarecrow zombie. If you ask me, that’s a deal-breaker, but maybe he likes that kind of thing. Regardless, from the moment this plot thread is introduced, you know exactly where it’s going. He’s going to sabotage some escape plan, he’s going to confront the girlfriend who will ultimately kill him and it’ll tack twenty minutes onto the length of the film. And that’s exactly what happens. Every time this film introduces a concept or plot point, it’s so well tread and generic that you’ll know exactly what’s going to happen next. For a movie I’ve only seen once, I felt like I’ve seen all of this before. And that’s because I have.

“Husk” is just a flat and generic film. Outside of being insanely by-the-numbers, it doesn’t really do anything egregiously wrong. But it also doesn’t do anything different, new or otherwise note-worthy. The end result is a film that’s just there. I didn’t like it yet I can’t say that I hate it. I can’t recommend it to anyone, but at the same time, I can’t say that it’s not worth watching. If this was on Syfy on a lazy Sunday afternoon, I could see myself watching it to kill some time before going on to do something else or waiting for some laundry to finish up, but I also wouldn’t seek it out. I suppose there’s a place for movies like this, but it’s not a place I’d ever purposely go to. Kind of like how I’d never find myself purposely wanting to watch this again.