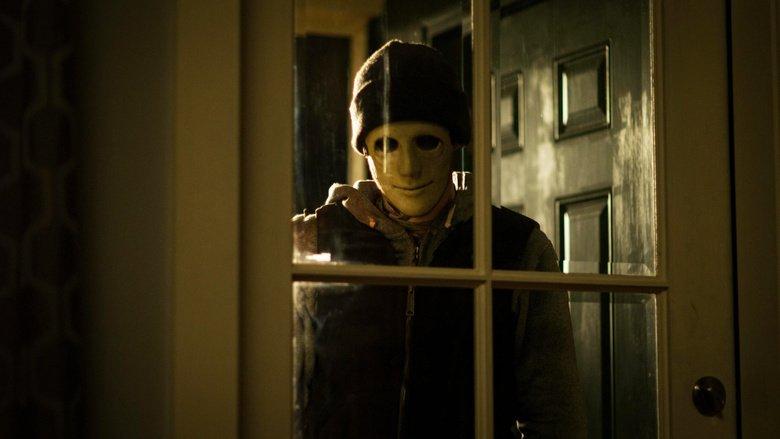 Mike Flanagan has been a busy guy as of late since a wider audience got a taste of his vision with 2014's Oculus. The  director still has the oft delayed Before I Wake slated to hit theaters later this year and we wait to see if he can turn Ouija 2 into a viable franchise. That enough would be a busy schedule for any filmmaker, then Hush- Flanagan's latest- premiered on Netflix just weeks after it's premiere at the South by Southwest Film Festival. A pleasant surprise for the video streaming giant's subscribers and genre fans alike- still one can't help but ponder how much better the film would play on a big screen.

The Strangers meets You're Next in Hush as it places Maddie (Kate Siegel), a deaf novelist, in a secluded home where she suddenly finds herself being tormented by a masked killer armed with a crossbow. That's pretty much it, short and sweet just as Flanagan has paced his little home invasion flick- clocking in at a lean 87 minutes. Seemingly confident that the lack of any real narrative will be an afterthought to the thrills he's packed into the film. With only 15 minutes of spoken dialogue Flanagan leans heavily on the cat and mouse chase, which at times becomes a bit repetitive.

Repetitiveness, poor character decisions, unexplained plot mechanics- they're all here to some extent, but never become a major hinderance on the enjoyment to be had. The killer dons a pretty creepy mask, but inexplicably ditches it less than 30 minutes in and never puts it back on. Is this a nitpick? Yes, it most certainly is- at the same time, the question remains, why where a mask at all? Our protagonist, Maddie, is deaf and mute but not blind and the killer felt it necessary to put the mask prior to his knowledge of Maddie's condition. Regardless, I suppose it's then not a spoiler to say that John Gallagher Jr. (seen recently in 10 Cloverfield Lane and almost unrecognizeable here) plays the killer with an effective creepiness. The killer ditching the mask then plays benefits as Gallagher can stretch his sociopathic muscles as a thespian- which he does pretty incredibly. Kudos to Flanagan's writing in fleshing the character out just enough to know he's completely unhinged without ever dolling out too much info- like motives- thus keeping the mystery of the killer in tact. Hush is about the characters and chills while being less about mystery or twists and is all the better for it.

Since most of the movie is the cat and mouse game between Maddie and the killer there's little outside of Siegel and Gallagher's interplay to discuss. The strength of the film is the interactions between the two as well as the occasional additional cast member that shows up. Популярный игровой азартный портал playamo устраивает ежемесячные турниры, в которых можно выиграть солидную сумму денег без особых усилий. Flanagan's direction is tight keeping things claustrophobic in spite of the middle of nowhere setting- which is accomplished through the disability of the character and sometimes using complete silence to enhance Siegel's point-of-view. A low body count means that Hush relies heavily on tension and Flanagan manages to ratchet things up at the most optimal moments, which sometimes bleeds into the repetitiveness of the film's final act. Flanagan cannot side step genre conventions, but subverts them in clever ways and the ability to enjoy the film in spite of familiar tropes is a testament to a director skillfully utilizing them.

Hush is at its best when it lets Gallagher loose to chew his scenes of dialogue with a dead eyed stare and complete indifference to the life he's set his sights to end. The cat and mouse aspect of the film is often the least interesting part and thrives when Siegel and Gallagher have locked eyes and react to one another. Flanagan unsettles with his writing by giving very little explanation as to why the killer does what he does- and does so with a very bare bones script that uses its language with purpose. Hush is quietly familiar, but asserts itself loudly amongst a genre ripe with numerous flaccid examples attempting the same thing.