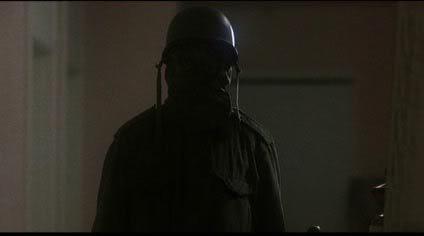 “The Prowler” is a boilerplate slasher from the early eighties. The film holds nothing special in the plot, the acting, or the scare department. So it’s easy enough, give it a score of 2 and walk away, right? Normally, I would but there is at least one element of this stock stalk n’ slash that warrants some attention.

We open with a Dear John letter and news reel footage of soldiers returning home from the Great War. It is the summer of 1945 and in the cozy little seaside getaway of Avalon Bay, the local college is preparing for annual graduation festivities. The students and returning G.I.s are all more than ready to bask in the halcyon haze accompanying the end of World War II. As will happen during a party an amorous couple sneaks off to pound genitals in a nearby gazebo. And as will happen in a slasher film they meet an untimely end at the hands or tines of a jackbooted, pitchfork wielding killer. The small community is rocked by the news and the father of the murdered girl, who is a local business magnate, cancels all such grad night parties in perpetuity.

Flash forward to 1980 and we find that the old crone is enfeebled and incapable of stopping the Grad dance for the first time in 35 years. The class of 1980 is throwing the shindig and local coed Pam is hoping her beau, Deputy Mark London can steal some time to come and dance with her. Unfortunately London’s boss Sheriff Fraser is off fishing for the weekend leaving the insanely well coiffed Mark to patrol Avalon Bay by himself. To make matters worse the original looney with Dear Johnitis has sharpened his pitchfork and returned to punish the kids for dancing. The kids boogie, smoke some reefer, drink Everclear, skinny dip in bra and panties (c’mon!) and wait around to be bumped off.

All of the clichés associated with 1980’s slasher films are present in “The Prowler”. Unfortunately they don’t come with twists or wrinkles that make the film standout. A good deal of time is spent waiting in a tensionless limbo for the next kill sequence. There is a handsomely endowed young lass in a shower and some wonderfully unjustified pieces of plot machinery towards the end but the film is by and large a pretty torpid affair. To put a fine point on it when people aren’t dying they’re swimming alone, dry humping in the basement, sitting in a jeep or walking very slowly so that death can find them. The formula isn’t a bad one but the ratios in this film are skewed nearly to the point of narrative gridlock.

There are three factors that keep “The Prowler” from a quick dismissal. First, the final girl in the story is a meaty, freckled, soccer player type who may not be Maxim ready but runs like an athlete and has the bone structure to make the hand to hand finale with the killer believable. Her physical comportment could have been a real boon to the film had she been under duress more often instead of parked on her tookus in her boyfriend’s jeep. The second factor that nearly elevates the movie is the Killer’s costume design. A faceless nut that looks like he robbed an army surplus store is scary. The pitchfork is a tad out of step as the primary murder weapon but this dude does cut a mean figure as he pursues the hapless students Avalon Bay.

Those two things having been noted, there is still really only one star in “The Prowler”; a star that spends no time on screen. Through the years Tom Savini has developed a reputation for being a dick, especially among horror conventioneers and autograph seekers. It is the thing I hear most when I bring up his name to other horror fans, so much so that it has probably even colored my opinion of the man over the years, though I have never met him. After watching “The Prowler” I dare say that Tom and I are back on good terms. The kills are graphic, haunting and memorable. Savini’s FX work is so good you would be hard pressed to find anything done in present day cinema that is any better. A pitchfork through a naked, showering coed, a bayonet through the skull and an eerie throat slitting in a darkened pool are all beautifully captured. In these uber-violent moments the film takes on a more operatic feel almost Argento-esque. The movie’s violence is so well done that it may actually amplify the stagnant feeling in the rest of the film.

“The Prowler” is a long slog though old mud featuring one of the more predictable reveals in masked killer film history. If you are just looking to sit down and enjoy an old slasher movie choose another Friday the 13th/ Halloween hybrid. If you have the chance to skip to the kill scenes then I would recommend doing that to check out Savini at his best; but viewing the film in its totality is a chore best reserved for Slasher completists.