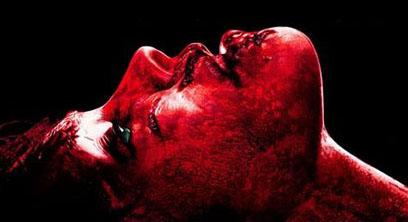 Casting a pregnant woman as the victim in a horror movie is so head-slappingly obvious it's odd that it hasn't been done more often. Without even establishing the slightest bit of character backstory you've got the sympathies of an audience who doesn't want to see such a vulnerable character come to harm and the element of taboo that comes with the fact that it's not just the life of a nubile young girl that's at stake- there's also a baby, the killing of which is off-limits in all but the most sadistic horror films.

In fact, unless someone makes a movie about a broken-hearted quadriplegic in short pants being stalked in the Antarctic by a cybernetic polar bear from the future it's going to be hard to top the vulnerability of the main character in Alexandre Bustillo and Julien Maury's “À l'intérieur” A/K/A “Inside”.

Sarah is still grieving over the recent loss of her husband in a car accident and is spending the last night of her pregnancy at home alone on Christmas Eve as much of Paris is in unrest due to race riots. Her slient night is interrupted by a knock at the door. A woman asks for help, claiming that her car has broken down. When Sarah refuses, the woman reveals that she not only knows Sarah's name, but also that her husband is dead. From this point (about 15 minutes in) until the end of its lean 78 minute running time, the film becomes a tense fight for survival between a relentless aggressor and a nearly helpless victim.

Help does arrive for Sarah on a few occasions. This is the rare horror film where the heroine not only calls the police immediately without experiencing any mysterious phone problems, but they even believe her and show up and investigate- more than once. Family, friends, police- a steady stream of potential saviours show up throughout the night, raising the hopes of both Sarah and the audience, but this film is almost cruel in the way that it raises the possibility that the situation might get better and then dashes all hope to make it seem as though Sarah is doomed.

On the surface, “Inside” has all the elements of any other “Halloween” clone: a mysterious killer, a dark house, a helpless young woman, a holiday night. What it does with those elements, though, is to make a film that's much closer in spirit to Carpenter's original than any number of slasher cash-ins- and that includes the “Halloween” sequels.

One of the most effective components of “Halloween” was the soundtrack. The soundtrack to “Inside” manages to create the same disorienting effect as Carpenter's score without even using music in the traditional sense. An ambient mix of thuds, whirs and clicks effectively expresses the deteriorating mental state of the psychotic woman as well as being alien enough to keep the viewer on edge.

Another strong point of “Inside” is its unnamed antagonist. The woman has a clear goal- she wants Sarah's baby and is relentless in her pursuit of that goal. She isn't, however, the unstoppable juggernaut we typically see in this type of movie. There are a few scenes of her nursing her wounds and recovering after a brutal fight with another character.

There's something both satisfying and disturbing about seeing a slasher character putting a cold compress on her head after having a lamp broken over it. This isn't a supernatural force you have no hope against- it's a crazy lady with a pair of scissors, who, if you cut her, will bleed, and maybe even die, which makes it even more frustrating when she doesn't.

“Inside” does have its flaws. Perhaps the worst is that the film doesn't trust its audience to understand or remember that there is a child inside Sarah's protruding belly, and continually shows us poorly rendered CG of a baby that looks as though at any moment it might start dancing and trying to sell us a Quizno's sub. That aside, with such a short running time the film doesn't slow down long enough to make many missteps.

Perhaps the most worrying thing about this film is that it continues the emerging trend of French horror directors making a stunning debut and then being drafted to Hollywood to helm a remake. Following in the footsteps of Alexandre Aja, who went from “High Tension” to “The Hills Have Eyes” and David Moreau and Xavier Palud who started with the excellent “Ils - Them” only to direct the tepid remake of “The Eye”, Bustillo and Maury are currently at work on the upcoming relaunch of the “Hellraiser” franchise.