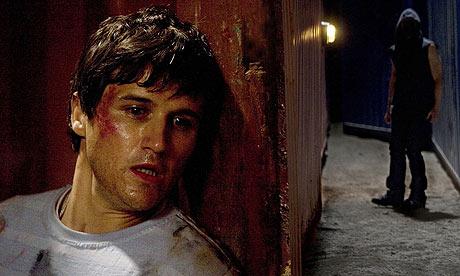 Writer/director Mark Tonderai's 2009 feature-length debut "Hush" asks the age-old question, "What would you do if your sexy ex-girlfriend was kidnapped by a hoodie-wearing lunatic moments after she dumped you in a gas station restaurant?" I'm sure most of you would consider leaving the poor girl to suffer whatever horrible fate awaits her, especially considering the whole scenario wouldn't exist if she hadn't been so desperate to kick you to the curb. Of course, given the massive amount of brownie points you'd likely incur for saving her life, a bloody, suspense-filled adventure might be worth the peril.

"Hush" is, essentially, a mildly clever, moderately stylish rehash of several like-minded pictures, namely Jonathan Mostow's "Breakdown" and John Dahl's "Joy Ride," with a dash of Steven Spielberg's "Duel" thrown in for good measure. The entire movie, from its unlikely protagonist to its predictable twists and turns, has been covered elsewhere, usually to greater effect. And while this isn't necessarily a bad thing, Tonderai doesn't inject enough originality into the proceedings to atone for his borrowed ideas. What's more, the film's grand finale is somewhat lacking, a huge no-no when you've been gradually building mountains of suspense for roughly 90 minutes.

Will Ash stars as Zakes Abbott, a struggling author who takes an unglamorous job changing advertisements in gas station restrooms in order to make ends meet. Assisting him with the latest assignment is his patient yet irritable girlfriend Beth (Christine Bottomley), who, unfortunately, is waiting for the right time to inform the poor sap that she has, in fact, been knocking the proverbial boots with her good friend Leo. As couples tend to do on long, arduous car trips, the dysfunctional pair spend most of their time bickering and arguing, though they do set aside a moment to discuss whether or not Zakes saw a naked girl trapped inside the back of a truck. Which, of course, he did.

After a particularly nasty blow-up several miles down the road, Beth abruptly decides to dump Zakes inside a gas station, and, as a result, opts to find her own way home. Flabbergasted and heartbroken, our hero retreats into the confines of his car and waits patiently for Beth to change her mind. When she fails to show, Zakes begins to panic, especially when he discovers that the same creepy truck he spied earlier is lurking in the parking lot. Convinced that his beloved Beth has been kidnapped by a nefarious evildoer, he sets out to stop her tormentor at all costs.

"Hush" is certainly a nail-biter, and Tonderai handles the mounting suspense with surprising ease. It's somewhat sad, then, that the movie sort of derails during the final lap. Instead of delivering a powerful, satisfying finale that exudes the same intensity as the rest of the picture, we're presented with a rather cliché set of circumstances that fit together a little too easy when compared with the rest of Zake's trials and tribulations. You want this poor bastard to really stick it to the twisted freak who’s tormented him throughout the entire film, and while his demise is definitely squishy, it left me feeling somewhat dissatisfied.

The rest of the feature, while a little on the ridiculous end of the spectrum, is well-written and skillfully executed. There are plenty of nerve-shredding car chases, unexpected double-crosses, and a few inventive twists to keep you moderately interested, as well as a keenly nuanced performance from Will Ash. You will, no doubt, notice numerous similarities between “Hush” and the titles I mentioned earlier, though I suppose this is par for the course. Filmmakers who borrow heavily from the movies that influenced them are commonplace these days, so I suppose I should just shut up and get used to it, already. Sheesh.

Bottom line: “Hush” is quality work from an emerging talent within the genre. Suspense is the name of the game, the proverbial soup du jour, so those hoping for a non-stop bloodbath will have to settle with a few fleeting moments of unsettling violence and a very limited body count. Had it not been for that unimaginative conclusion, "Hush" would have fared a little better. It's not the worst title on the shelf, mind you, but I'll wager a week's worth of walnuts that you've seen it all before. If you haven't, prepare to be thoroughly dazzled.