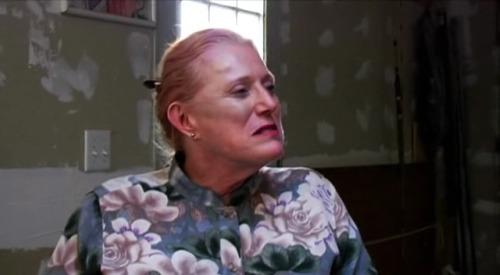 Once upon a time, I was extremely tolerant of microbudget productions crafted by filmmakers who shamelessly utilized borrowed concepts to tell a familiar story. "At least they're trying", I'd say as I watched yet another "Texas Chainsaw Massacre" knock-off fueled by over-extended credit cards and populated with the director's friends and family. However, after enduring countless titles of this nature over the past few years, my tolerance for these ramshackle, backyard monstrosities has become almost nonexistent. Unless you've got an incredibly unique twist on the same old formula, don't even bother. I'm not trying to sound mean, cruel, or snobby, but enough is enough.

Case in point: Morgan Hampton's backwoods cannibal opus "Razor's Ring", a film that embodies everything I loathe about low-budget horror. Even if you can get past the flaccid direction and the laughably overblown performances, you still have to contend with a "plot" that goes out of its way to insult your intelligence. Everything about the film is preposterous, and this is coming from a guy who thinks that watching "The Garbage Pail Kids Movie" is a wonderful way to spend a sunny Saturday afternoon. If you can't be bothered to create a believable setup for your derivative motion picture, why tell a story in the first place?

Here's the pitch: After thoughtlessly running down a defenseless old man on a long stretch of road in the middle of nowhere, an annoying pair of homicidal maniacs and their spineless, impossibly wimpy captive find themselves living under lock and key at a crazy, wheelchair-bound old woman's farm. Not surprisingly, this podunk compound is the home to a loose collective of cannibals who occasionally snatch people off the street and serve them to the flesh-eating residents of this kooky community. What these murderous fiends haven't realized, of course, is that their world is about to be rocked by one of the goofiest protagonists in recent memory.

It's not that I find the concept of thrill-killing kidnappers who randomly torment unsuspecting joggers to be far-fetched, astonishing, or hard to understand. I'm also open to the idea of Appalachian cannibals living in seclusion on a large tract of land owned by a demented old woman and her stable of soggy-spined cronies. I'm willing and able to stomach just about any sort of scenario you can imagine, that is, as long as the director and his cast can handle the material in way that's both fresh, intelligent, and visually pleasing. Unfortunately, "Razor's Ring" is virtually devoid of quality on any level, which can make for a daunting experience when the premise itself is practically pulsating with infected boredom.

To matters worse, there's not a single likeable character in the entire movie. Not one. Razor (Paul Schilens) -- whose supposedly "lucky jewelry" graces the title of this deplorable little endeavor -- and his skanky girlfriend Julie (Lisa Wharton) are needlessly annoying; the urge to strangle them both with rusty chicken wire is so overwhelming that you might find yourself ignoring anything they have to say. The picture's hero, jogger extraordinaire Scott (Wayne Casey), is a cinematic pipsqueak through and through. Rooting for the guy is out of the question, and the fact that he's the audience is supposed to connect with is downright discourteous to anyone with a brain.

The last movie I hated this much was the remake of "It's Alive", though I'd be more than willing to watch that one on a perpetual loop for days on end before I'd even consider revisiting "Razor's Ring". Morgan Hampton's slipshod direction, not to mention his cast's utter lack of talent, would have been easier to swallow had it not been packaged with a premise we've seen dozens of times before. Unless you've got a fetish for low-budget "Texas Chainsaw Massacre" rip-offs or a hard-on for anything featuring cannibalistic behavior, there's absolutely no reason to waste 90 minutes of your life on "Razor's Ring". Even then, you could do better.