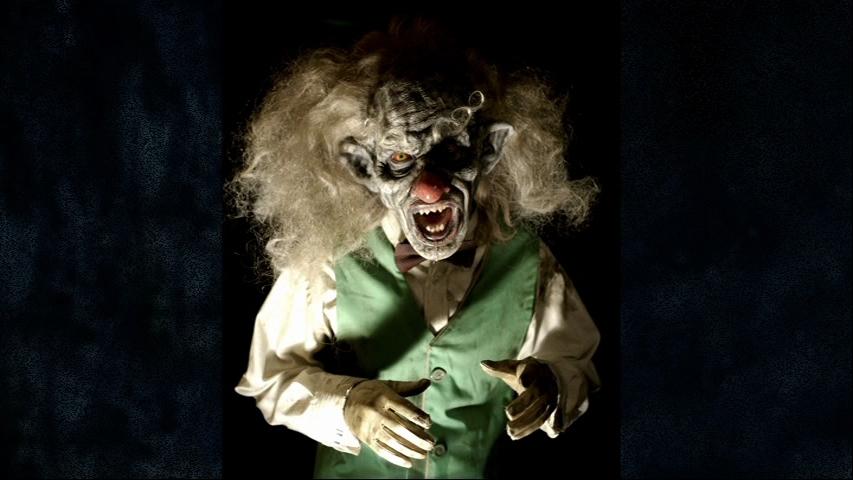 “House of Fears” meanders from a brief, jarring cold open to a scene of Rocky Point Haunted House designer Cydney Neil (appearing as herself) investigating an African mine, to teen stepsisters Hailey and Samantha (Corri English and Sandra McCoy) getting escorted to a party by their parents.

These bits of establishing matter vary in usefulness. The cold open – Hailey buried alive – is too brief and too contextless to provoke much aside from an 'oh, that's what that was about' moment when the film catches up to it in the third act. The Africa scene sets up the deus ex machina of an evil stone idol – Cydney finds it and sends it back to the US to be a prop in her new haunted house “The House of Fears.” The party is pure exposition – we learn that Haley and Samantha don't get along, and we get the names and social dynamics of the rest of our dead teenager cast: wisecracking Zane (Eliot Benjamin), Hailey's 'just a friend' Carter (Corey Sevier), Candice (Alice Greczyn) and her boyfriend Devon (Michael J. Pagan).

Once the teens all leave the party and head to the House of Fears, where Zane is going to take them on a dry run before opening night, the movie really starts. The evil African idol causes the animatronics in the house to come alive and attack as the young, pretty cast gets picked off one by one. Like they do.

“House of Fears” is a straightforward movie. It plays straight with the audience and doesn't have any shocking plot twists. The filmmakers are content to get out of the way of the movie's real star: the haunted house. The movie may not be particularly complex, but anyone with a love of haunted house attractions is going to have a good time watching this one, if only because their haunted house is particularly kick-ass. The film plays like a love letter to the craft of its subject, pulling back the curtain on how one or two classic haunt effects are done and spending a lot of time in the warren of secret passages behind the house's rooms.

It's clear that “House of Fears” was made on a shoestring budget, but budget shouldn't be a criticism of a film. How well that budget is used is another story (“My Soul To Take” had a $25 million budget, guys), though, and “Fears” is surprisingly effective with what it had to work with. Throughout, the film has solid practical effects (and the filmmakers are smart enough not to overreach their capabilities) and its cast (one of the easiest places to skimp in this genre) is mostly filled out by TV actors. In fact, the worst thing about “House of Fears” is its clunky, inelegant prologue, which ends up feeling under-written.

It's not trying to make any existential statements or revolutionize the genre. “House of Fears” is a simple movie and that's what ultimately makes it a fun one.