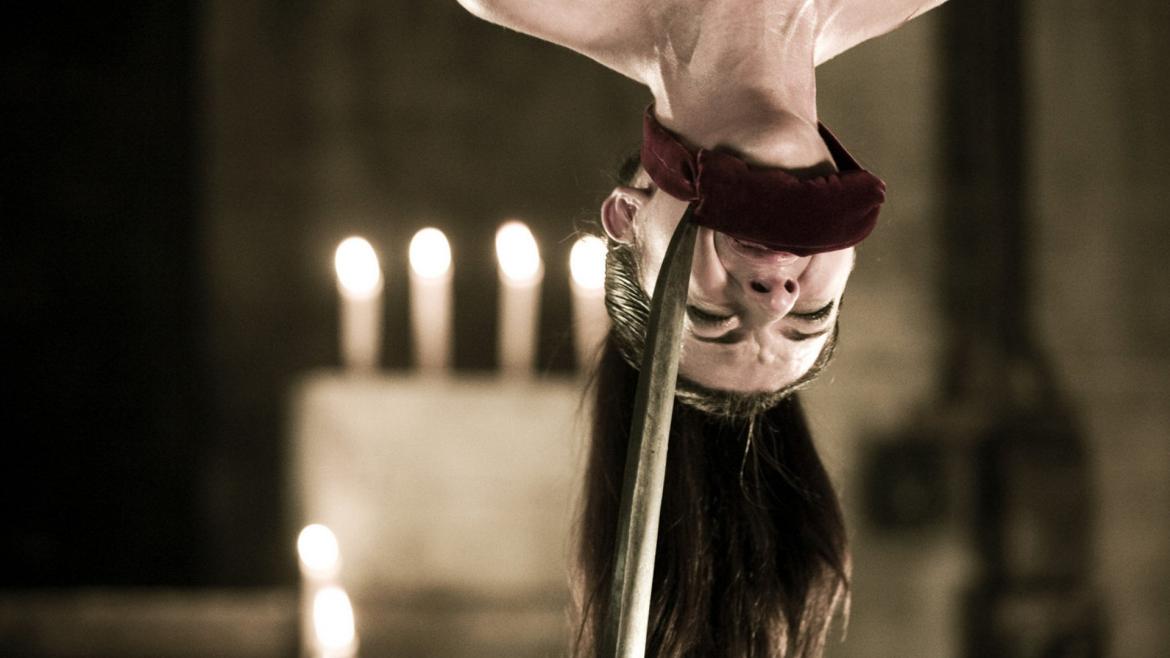 Eli Roth made one thing clear over and over while out promoting "Hostel 2", this will not be a rehash of the original "Hostel." In many ways, the man is absolutely right. As a sequel "Hostel: Part II" aims for something a little higher than the original. Surprisingly, it succeeds at many things... if perhaps not all.

The real wild card is Heather Matarazzo as Lorna, the bookish prude who seems to be holding the other two girls back early on. Heather has made a career out of playing awkward characters like this and she's a definite stand out here. She's also killed pretty awfully, which was hard for me to watch because I had unexpectedly began to care for her and her wide eyed romantic view of Europe. Overall I liked these women and was sorry to see what happens to them.

The differences between the first acts of both films are apparent from the very beginning. Instead of hash houses and whore houses, these girls seem more interested art classes and cultural festivals. I was worried when I read this beforehand that much of the "rawness" that I enjoyed so much about the original would be gone this time around. Instead what we have here is (dare I say it) a mature Eli Roth film. His camera glides through the ancient streets of Europe and lingers on artful images much longer than one might expect. So instead of getting beaten to death with "breasts and drugs", we're seduced with the artsy side of European culture right along with these women. What the opening act does have in common with it's predecessor is pacing... which is something that we'll touch on later.

At the same time we are seeing these girls venture through europa (while increasingly sinister things happen around them) we are also treated with a lot more insight to the kind of people who bid on the right to torture and kill another human being. A clever scene early on shows a gaggle of business men competing on an Ebay like website for the right to torture our lead characters (whose passports are scanned and uploaded at their arrival to the hostel). It's more than a bit shocking (and surprisingly comedic) to watch this go down while most of these guys are shopping with their wives or hanging with their kids at the beach. From early on you can tell Roth is planning on exploring the themes behind this concept a bit deeper.

It's at this early juncture that we are introduced to two characters that drive most of the events of the film. Roger Bart (Desperate Housewives) plays "Stuart", an uptight business man who has been pushed into making the trip to Slovakia by his friend "Todd", played by Richard Burgi (24 season 1). There are major contrasts between these two characters. Stuart seems skiddish about the idea at first, yet at the same time oddly fascinated. He has obvious ill will towards his wife that he's itching to take out on a hapless victim, but he seems to need a push from Todd every step of the way.

Todd, on the other hand, is a coked up alpha male who can't wait to get to the factory and "dig in" so to speak. It's nice as a viewer in a film like this to see the director actually try and give these characters some nuance. Instead of a die-hard, black hearted killer with no remorse, we see these men for what they more than likely would be in real life... ie real human beings that are afraid of the impulse to kill but who seem unable to control it. If you think you know what's going to happen with the two of them by the end, you'd better check your expectations at the door because chances are Roth is going to dash them. I found their character arch's believable and clever and to me, this aspect is the main thing that this sequel offers that you won't find in the original.

Considering how meticulous and calculating the pace of the first half is, what happened next is a bit surprising. Once the girls' are "captured" and sent to the factory, things take off very quickly. We see one of the girls die in an immensely grizzly way in the beginning of this portion. Roth proves that he's somewhat well read by throwing in a great homage to the fabled Countess Elizabeth Bathory. The scene is all at once graphic and artful and shows Roth has been watching his Argento films lately. By using women instead of men this time around the torture comes off as more sexual and mean spirited. It's your call as to whether or not that's a good thing. As we stroll through the halls we're also treated to a nauseating cameo by Cannibal Holocaust director Ruggero Deodato. While quantity wise the gore in the original probably wins out, the sequel tops it's predecessor in my book if only for it's sheer audacity and originality. There are only a few stand out moments here, but they'll no doubt be stuck in your head for a while.

Sometimes you meet a guy and there's just something fucking scary about him. Something about him that makes you think, this guy has killed somebody... What we do today is going to pay off for the rest of our fucking lives.

Now let's get to the real juicy observations. At this point in the movie I was having a hard time understanding why people didn't seem to be digging on what he had offered up. Then it happened. After some lovely character twists are thrown our way the main heroine finally begins to fight back. She turns the tables on her captor and in the process comes face to face with the head of the whole operation. It's at this point that she offers to buy her way out (which is where the "rich" angle comes into play). On one condition the man says, "no one leaves here until they kill someone." She does just that (and in an especially cringe inducing way I might add) and is apparently left to go on her merry way.

If you're able to make that leap of faith, than more power to you. This viewer however felt a bit cheated. We're immediately taken out of the factory and sent back to the scene of some earlier happenings in the movie. The woman who lured the girls to the Hostel gets lured herself out into the forest, and just like in the original she gets what was coming to her. Boom, end credits.

When the credits began to roll there was the overwhelming sound of people whipping out their cell phones to see what time it was. Could that really be the end? It's almost inexplicable, but the second half of the film comes up extremely limp because it's just not there. There is no grand escape sequence, no feeling of relief that things are over because you are never given enough time to even think such things. If one were to be bold you might suggest that there was some sort of mishap in the editing room. You can't help but smell the stench of "studio henchman" who perhaps felt the film was a bit too long for a summer audience. If that's the case than they were deadly wrong, because they're probably responsible for killing off "Hostel: Part II".

In the end Eli Roth's "Hostel: Part II" left me feeling frustrated and empathetic. He truly did what he aimed to do... which was not to simply rehash the original (ala "Saw") and bring something different to the table. Despite my misgivings, he won me over with his meticulously crafted little film. It was thoughtful and artsy and wonderfully violent. The only problem is that there seems to be about a half an hour missing from the end. It gives the whole thing a "premature ejaculation" sort of feeling that is proving hard to shake even hours later. After watching it I can't help but think that there's more to this story than we all know, but perhaps that's just because I want to give Roth the benefit of the doubt. I will surely be checking out the "uncut" DVD to see if I was right.