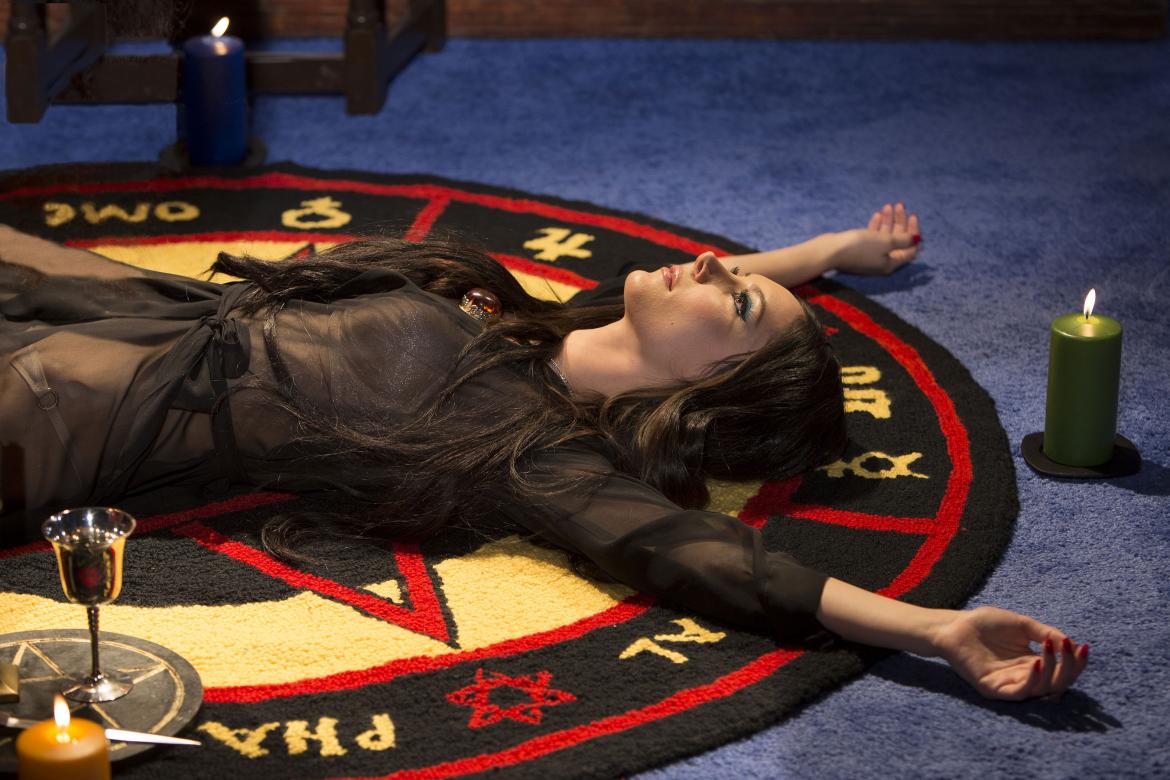 Filmmakers working with a tiny budget have to find angles, cut corners, and save wherever they possibly can. Many adopt--or should I say--embrace the old and give the film a retro aesthetic and some use that to exploit a genre fan's nostalgia while others simply mean for it to be a love letter to the style. The Love Witch is a little bit of both. It is at once a technicolor work of art that also tries too hard to wear the mask of a 60/70's era pulpy sexploitation flick.

At times, The Love Witch wears its copycat attitude on its sleeve which becomes part of its charm. However, a combination of length, writing, and acting create a perfect storm of awful--albeit with a charming flair. Samantha Robinson stars as Elaine, a with that wants one simple thing...love. Robinson's sultry persona oozes throughout nearly every scene as Elaine casts love spells on any many she runs into either. Elaine is a sexual being who has specific tastes, but also an axe to grind against the male gender. She uses her sexuality as a weapon to lure men into loving and lets the spell consume and ultimately kill them. Let's face it though, there are worse things than biting the dust after a night of passion with a sexy witch.

There are plenty of things wrong with The Love Witch, but it's tough to fault it for a lot of them. Seeing as how it embraces the retro style in every aspect the dips in acting and quality dialogue are by design. You won't have nearly enough appendages and extremities to count the number of times Elaine's name is used to start and end a sentence--not even if you watch it with a buddy or two. As the film limps past the 80 minute mark those aspects do start to wear you down and at that point you still have another 40 minutes to go. The moral of that juicy tidbit is that two hours is entirely too bulky for this particular brand of technicolor wizardry.

The visual style is the real reason to check this one out. The exuberant use of color perfectly encapsulates the look and feel of old giallo films, but is sleazy enough for the sexploitation crowd. Robinson spends a lot of the film in and out of sexy outfits, dancing for the enjoyment of her prey, or starring seductively into the camera with a hypnotic glare seducing the viewer. The movie quite frankly benefits from her sex appeal, especially when there are not one, but two, characters who look like the unholy offspring of Tim Burton and Alejandro Iñárritu--but also because her screen presence is bolstered by the beautifully dressed sets and surreal visual style. All the while, Anna Biller's script has some surprisingly deft spins on the empowerment of women that borders on the extreme, but melds perfectly with a film such as this.

Nostalgic viewers susceptible to the love at first sight myth might very well end up bewitched by the spell cast by The Love Witch. For everyone else, director Anna Biller brings plenty of enchanting DIY charm of modern indie cinema to the table. What makes The Love Witch work is that it is not a spoof of the style Biller is going for, but a lovingly authentic tribute to an era of cinema in its simplest and most absorbing form.

Land of the Minotaur