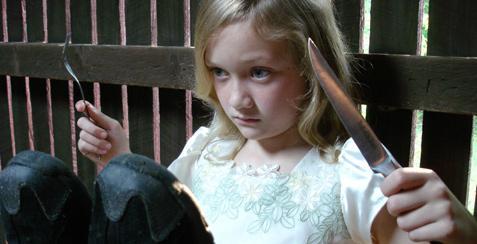 Generally speaking, I am not a fan of children. And, as far as I can tell, they don't care much for me, either. If these overprotected, misguided miscreants aren't pre-packaged from birth with some sort of mental or physical abnormality, you can rest assured that their parents are complete and total nutters who are a few signatures short of an extended psychiatric vacation. As harsh and detached as these words may initially appear, there's a part of you that knows I'm right. Spend two seconds working in retail and all skepticism will be ritualistically shattered and quietly buried in the backyard. All apologies, of course, to those individuals whose loins have produced gifted, well-adjusted offspring. Pat yourself on the back a couple of times.

Had these feelings and opinions not existed previous to my screening of Christopher Denham’s 2008 psychological head game “Home Movie,” I’m sure they would have instantly taken root as soon as the picture came to an end. Just like “The Children” and “The Orphan” -- two films which also deal with unusual behavior from tiny people -- this violent, disturbing little tale reasserts my theory that, when left to their own devices, most kids will savagely bite their classmates, terrorize their parents, and crucify their pets. However, if crucifixion is simply out of the question, turning the animal into a tasty sandwich is totally acceptable behavior. I think it's in the manual.

Adrian Pasdar and Cady McClain star as David and Clare Poe, an upwardly-mobile couple who just made the ambitious transition from city to country life with their two unusual children, Jack and Emily. The kids really don't say too much, a fact which seems to escape their quirky parents, both of whom are far too busy pursuing their own personal happiness to notice the signs that something isn't quite right with their offspring. The behavior soon darkens, forcing the bewildered couple to approach these incredibly violent episodes from two completely different angles. David, a Lutheran pastor, searches for answers from the Lord, while his wife, a child psychologist, decides to treat them like patients. Both are uniquely clueless, and the end result of the ineptitude are beyond shocking.

“Home Movie” is, as its name suggests, just that: a roughly-edited series of awkwardly-shot home videos lensed by the aforementioned parental units over the course of a few extremely turbulent months. All of these increasingly sinister events are captured through the use of the family video camera, a plot device which has almost entirely worn out its welcome. However, first-time writer-director Christopher Denham does a wonderful job of making these individual segments seem naturally cohesive. The entire film is well-directed and sharply edited, the latter of which is responsible for some of the creepiest moments in the picture. Rest assured you'll never look a child's playhouse the same way again.

As impressive as Denham’s directorial abilities may be, the true secret to the film’s success lies in the casting of Amber Joy and Austin Williams. Their portrayal of Emily and Jack, respectively, is the essence of the story’s inherent eeriness. They are quiet, maniacal, methodical, sadistic, and keenly intelligent, as well as subtly frightening and more than a little intimidating. Denham's script is, unfortunately, nothing remarkable, and the picture's ability to generate mountains of ungodly tension is derived heavily from these two gifted young actors. They've got cold and detached down to a science.

The only thing that really prevents me from recommending “Home Movie” to just about anyone is the copious amount of child-related violence spread throughout the movie. Unlike other films of this nature, there's really no explanation as to why, exactly, the children are behaving this way. No allusions to mysterious diseases, no clandestine scientific experiments gone horribly, inexplicably awry -- Emily and Jack are savage, unapologetic sociopaths, plain and simple. This sort of content doesn't agree with everyone, and I can certainly understand why.

Overall, I was pleasantly surprised by "Home Movie," its players, and its ability to generate an unrelenting level of suspense. In fact, the film is so uncompromising and unsettling that I strongly suspect it could be effectively utilized as a form of teenage birth control. Don't give these kids condoms and make them read horror stories about sexually transmitted diseases -- show them a movie about disturbed, parenticidal children and let the hormones fall where they may. It's definitely given me a little insight into the inner-workings of the adolescent mind. As a result, my vasectomy is scheduled for next Tuesday. Wish me luck.