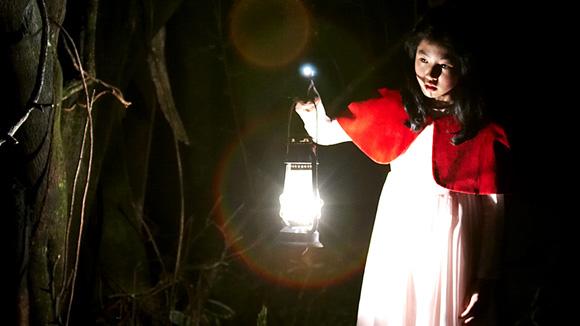 Filmmakers who have opportunistically mined the endless depths of children's nursery rhymes, fairy tales, and the stories by The Brothers Grimm for cinematic inspiration have often yielded some very interesting, very mixed results. Truthfully, the vast majority of these endeavors aren't worth the time it takes to remove the shrink wrap and meticulously peel off those impossibly clingy security stickers - "Rumpelstiltskin," I'm looking at you - leaving the rest to languish in that fetid world I like to call, "Watch them if you've got absolutely nothing better to do with your free time." Given the inherent creepiness of most bedtime stories, you'd think that transforming them into something sinister and disturbing and enjoyable would be a piece of sheet cake on a freshly-baked gingerbread house.

Korean director Pil-Sung Yim's surreal 2008 fantasy/horror outing "Hansel & Gretel" comes extremely close to hitting this lofty target, but ultimately, and unfortunately, misses the proverbial mark. Literary freaks will immediately notice that the film is quite different than its centuries-old source material, often changing crucial elements to the extent that you'd probably never make the connection between print and screen had the movie been titled something entirely different. You still get witches, ovens, and breadcrumbs, but not in the traditional sense.

The story opens with a car crash, an event which sends young father-to-be Lee Eun-Soo (Jeong-myeong Cheon) and his shiny automobile hurtling into an unusually dense forest just off the highway. Dazed and confused and currently without transportation, our hero wanders deeper into the woods, eventually losing himself within an incomprehensible maze of trees, brushes, and underbrush. It's here that he meets Young Hee, a young girl armed with an old-fashioned lantern and the promise of safety. Eun-Soo immediately agrees to follow the girl despite his initial suspicions.

Upon arriving at the girl's cozy little cottage in the center of this relentless greenery, Eun-Soo is promptly introduced to the entire family, a unit which consists of a sister, a brother, and two exceptionally nervous parental types. This considerate and outwardly friendly bunch quickly patch up the wounded lad and send him off to sleep. In the morning, they claim, a repair man will arrive to fix their phone, after which he can call for help and be on his merry way. Naturally, things don't go quite so smoothly, especially when our hero discovers that the adults he met the previous evening are nowhere to be found. Candy-coated Lynchian chaos ensues.

What follows is a dizzying - and frustrating - descent into hallucinatory horror, an adventure that comes packaged with just as many ups as it does downs. Keener film buffs will notice an eerie similarity between Yim's cartoony, child-driven cosmos and director Joe Dante's contribution to John Landis' 1983 anthology "Twilight Zone: The Movie," a segment that dealt with this premise in much the same way. And while Yim‘s effort is, at times, indescribably beautiful and wonderfully creepy, its well-crafted atmosphere is completely shattered by the time we reach it's needlessly melodramatic conclusion. Why some Asian horror flicks need to channel daytime soap operas is beyond my realm of comprehension.

Ignore the comparisons to "Pan's Labyrinth" and "The Orphanage;" "Hansel & Gretel" is its own beast, and deserves to exist outside such knee-jerk comparisons. Yim's slick direction, combined with striking visuals, strong performances, and eye-popping set design, make for an evening's worth of great entertainment, though the overall experience is diluted by the inclusion of some rather unpleasant tonal shifts during the film's final stretch. If you can handle the constant back and forth, prepare to be thoroughly impressed. Expect a cheapened, Americanized remake within the next few years.