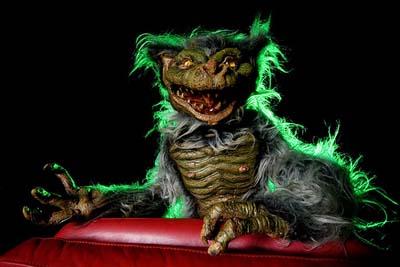 I'm not ashamed to admit that I'm just as excited about the 20th Anniversary Special Edition of Rick Sloane's entertainingly abysmal 1988 "Critters" wannabe "Hobgoblins" as I am the upcoming release of Fred Dekker's cult favorite "Night of the Creeps." Sad? Perhaps, but entirely true. I’ve had a worn VHS copy -- a former rental purchased for a meager eighty cents -- in my possession for a few years now, and it's served me very, very well. Now, thanks to the fine folks at Micro Werks, Sloane’s unintentionally fascinating horror/comedy is readily available at a fairly reasonable price, as is its curious 2009 follow up, “Hobgoblins 2,” a film I honestly can’t wait to experience. How pathetic is that?

Before continuing, let me make something perfectly clear: “Hobgoblins” is, by definition, a terrible motion picture. Scratch that -- it's beyond terrible. The acting is wretched, the script is barely comprehensible, the direction is as sloppy and amateurish as it gets, and the special effects are akin to something you’d find collecting dust in the discount bin at your local dollar store. The whole thing is one enormous, poorly-executed mess, but for reasons that are not perfectly clear to me, the movie is thoroughly enjoyable and utterly rewatchable. However, if you can’t make it through the rake vs. gardening hoe scene without even the slightest of chuckles, save yourself some misery and take a walk by the river.

The rest of us will find plenty to cheer about, as the picture is loaded with several jaw-droppingly hilarious moments, both intentional and unintentional. From the near-lifeless appearance of its titular creatures to the explosive, grenade-happy finale, “Hobgoblins” is ready and willing to entertain large groups of low-brow individuals in various degrees of intoxication. Or, in my case, a guy who doesn’t really know what to do with his free time other than stare blankly at his television screen as bizarre, microbudget images dance wildly before his eyes. You know what I’m talking about. At any rate, it's a blast.

In case you missed this cinematic scorcher during its days as a late-night cable mainstay or never got an opportunity to see the "Mystery Science Theater 3000" episode featuring this remarkable cinematic achievement, here’s the basic setup: During his shift as an overnight security guard at a defunct movie studio, young do-gooder (read: giant wuss) Kevin accidentally unleashes a group of fuzzy green aliens from their prison inside the film vault. Before you can say “hallucinating homicide,” this limp-wristed weenie is attempting to save his girlfriend, his porn-addicted best friend, and one amorous couple from the clutches of these sinister beings.

How sinister are they? Well, instead of gnawing gleefully on your salty flesh or giggling wildly while watching animated Disney films, this particular cluster of otherworldly troublemakers force their victims to become an active participant in their “wildest dreams,” an event which usually spells death for the unsuspecting individual. For example, one poor bastard falls to his death pretending to be a wildly gyrating rock star, while another prepares to meet his maker at the sultry hands of a murderous 976 operator. Not really sure how the prude-turned-stripper would have bitten the dust, but I’m sure it would have been spectacular. Maybe Sloan does have legit material for the sequel after all.

"Hobgoblins," as you may already have guessed, isn't everyone's cup of tea. In fact, I'm really not sure who, besides myself, would readily identify themselves as a fan of such poorly-constructed nonsense, especially if they ever want to be taken seriously again. Nobody on-board, cast and crew alike, seem to take the production very seriously, a fact which helps this movie step beyond the boundaries of tasteless entertainment and into that lovably wacky world of cultdom. In the right mindset, the film is incredibly fun and, at times, sharply hilarious. If you count "Troll 2" and "Sorority Babes in the Slimeball Bowl-O-Rama" among your favorite films, "Hobgoblins" might be something worthy of investigation. If not, move along and smile about it.