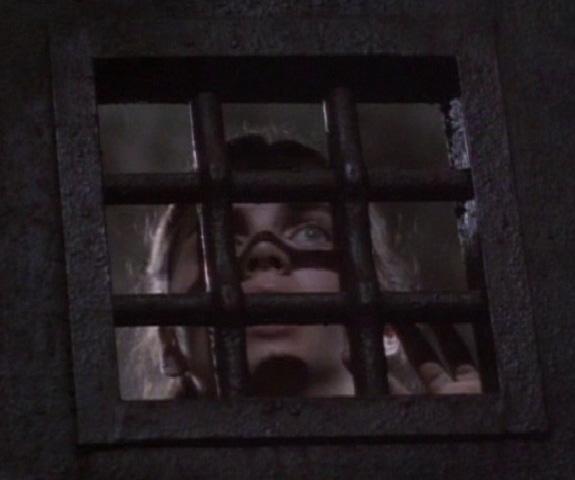 “Castle Freak” is one of those movies I’ve left on the shelf unseen for years, for no apparent reason. I’m a huge fan of Stuart Gordon’s other loose Lovecraft adaptations with Jeffery Combs in the lead – this one even throws in Barbara Crampton for good measure. For years I’ve heard people sing the praises of this movie but I’ve consistently passed over it, not infrequently in favor of movies that I knew going in would be terrible. I’m not sure why I’ve avoided “Castle Freak”. It might have something to do with the cheap-looking box art that looks like a lazy graphic designer whipped up a title logo out of two fonts and slapped it on top of a make-up test shot. It probably had a bit to do with the fact that it was a Full Moon Features production. I know Full Moon has its fans but I’ve never taken to its endless low-budget franchises and I never knew what to make of Stuart Gordon’s name next to the Full Moon logo. Whatever the reason for the delay, I have finally caught up with “Castle Freak” and I’m glad to say that it has far more Stuart Gordon in it than it does Full Moon.

Jeffery Combs, in a rare “normal guy” role, plays an American who has inherited an Italian castle from a deceased aunt. With his wife and blind teenage daughter, he moves to Italy to begin a new life. The family is still healing from a drunk driving accident caused by Combs which killed his five-year-old son and cost his daughter her eyesight. Unbeknownst to the family, the castle isn’t exactly empty. Chained up in the depths of the castle is the titular freak, a misshapen, scar-covered wretch imprisoned by the elderly duchess who previously owned the castle as her own personal stress-relief torture victim. Shortly after the family arrives the freak chews off his thumb to escape his chains and begins to run amok through the castle, seeking to satisfy desires he doesn’t quite understand.

“Castle Freak” is in many ways a gothic melodrama and a throwback to the classic period of monster movies. There’s a theme of family secrets and long-buried tragedies so pervasive that even minor characters are allowed a handful of salacious revelations of their own. Add in the castle setting and the freak, a monster which has been created through cruelty and has no conception of normal behavior, and it’s hard not to draw comparisons between this and some of the earliest horror movies like “Frankenstein” and “The Phantom of the Opera.”

Make no mistake though, despite its similarities to films of the past “Castle Freak” is very much a modern horror movie, with all the gore, sex and violence that comes standard with the genre. Sex is a primary motivation for the freak, despite the fact that the duchess has apparently cut off various organs that are typically prerequisites for the act. The freak doesn’t understand what he’s doing or how to interpret his urges but he still feels compelled to ape the actions he’s seen in spying on others in a grotesque mockery of the sex act. These scenes are effectively disturbing and it’s hard not to feel a little sympathy for the poor, confused freak even as he commits these disgusting and violent acts.

Another fairly modern touch is that the two main characters, Combs and the freak, are neither entirely good or evil. The freak is a twisted monster who kills and rapes indiscriminately, but he’s also so mentally and physically scarred by the horrific life he’s led that it’s hard to put too much blame on him for his actions. On the other hand, Jeffery Combs appears to be a traditional hero figure but he’s also a selfish whiner, a drunk, and an adulterer. At the start of the movie he’s reaching the bottom of a downward spiral and by the end his quest to prove that he’s not a murderer becomes his last chance to prove that he’s not a bad guy.

Maybe it’s because all of the basic plot elements are so familiar from being used in countless stories over the ages, but “Castle Freak” oddly feels like a modern-day remake of a classic horror film that never existed. With a little less blood and the sexuality left implied rather than explicitly shown, it wouldn’t be hard to imagine Lon Chaney or Boris Karloff playing the role of the freak. I might be fifteen years late to the party but it doesn’t really matter because “Castle Freak” balances classical and modern elements so well that it ends up as the kind of timeless movie that ages well and will probably continue to be enjoyed for years to come.