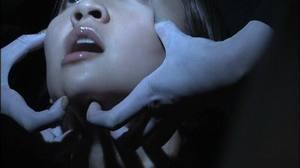 Enough. No more ripoffs of “The Ring”. I know horror is a super-cyclical genre and that success begets imitation, but “The Ring” is thirteen years old. There is absolutely nothing new or original that can be done with that template. No more snowy TVs (seriously, do TVs even do that anymore?). No more creepy ghost girls with hair covering their face. No more cursed videotapes (or internet videos, or text messages, or voicemails or telegrams). It’s all been beaten into the ground at least ten times over.

As if it wasn’t obvious enough, “Hide and Go Kill” is yet another “Ring” knockoff. In addition to possibly having the stupidest title of any of these knockoffs, it’s also a strong contender for being the worst of these movies. Where all of these films have been incredibly derivative and un-original, “Hide and Go Kill” also manages to be one of the worst paced films I’ve ever watched and is also insanely repetitive. By the end of the film, I was angry, bored and staring at the sequel “Hide and Go Kill 2” (also known as “Creepy Hide and Seek”!) on the top of my “To Review” pile with an ever growing sense of dread.

“Hide and Go Kill” is an anthology film of sorts. Instead of using the narrative style to tell a multitude of varied types of stories (such as the comic book in “Creepshow” or the fairytales in “Tales from the Dark Side”), the focus here is on one urban legend. While not sounding like a terrible idea, the problem with this execution lies in how specific the urban legend is. Instead of going for something like the urban legend in “Candyman”, the legend here is about a bizarre game called “Hide and Seek Alone” (I feel like this is a good time to point out that the subtitles are translated incredibly poorly, leading to stupidity like the name of this game). The game is played as such:

1) Remove all the stuffing from a stuffed animal.
2) Fill the now empty stuffed animal with some rice. Why rice? Who knows, it’s never explained.
3) Turn every light in the house off except for the snowy TV.
4) Fill the bathroom sink with water and wait until 2:55 am. At 2:55, soak the bear in the water.
5) Wait until 3:00 am, then stab the bear, tell it that it “you’re now the Devil” and go hide in the closet.
6) Spooky shit commences. The girl from “The Ring” crawls out of the TV (ugh) and stalks you around the house. If she finds you, you’ll face will get all contorted (you know, like in “the Ring”) and you’ll die.
7) To win, fill your mouth with salt water (?), go back into the bathroom and spit it on the doll and repeat “I win” three times.
8) Make a shitty movie about it.

As it’s so in-depth and specific, every story goes through each and every one of these steps. Multiple times. It’s boring. Real boring. Each story also has to show how the characters first learned about this stupid game. In each case, it’s through some text-message released novel called “Lonely Girl”. As described in the film, “Lonely Girl” is so dark and twisted that very few people would read it. Problem is, every single fucking person in the movie reads it. As do all of their friends. Whoops.

Easily 90% of this film are girls reading this story (or writing it, in the last installment) and talking about how great and dark and spooky it is. They’ll then ask everyone they know if they read “Lonely Girl” (they do) and if they’ve heard of a game called Hide and Seek Alone (they have). They’ll then play the game and something ever so slightly different will happen to them. This is essentially one twenty minute film with three alternate endings. Problem is, you have to watch that same twenty minute film three times just to see the different endings, which really aren’t all that different. Oh, and that twenty minute film is really poorly paced and translated, so you won’t really care enough to watch it once, yet alone three times.

It’s borderline unwatchable. As I feel I have a responsibility to never turn a movie I’m reviewing off, I finished it. If I was just watching this for fun though, this shit wouldn’t have lasted fifteen minutes. Why? Well, the first five minutes (which should be the hook which draws in the viewer) is a painful sequence where we watch a group of people discuss the game on an online message board. The choice in how this is shown is truly baffling, as instead of showing actual people with voiceovers or something along those lines, we get a purely black screen with each message typed out one line at a time. For five minutes. And it includes stupid online acronyms. It’s horrible. And, like everything in this goddamn movie, it happens three times.

The pacing is epically bad as well. The first story we get is easily the weakest, slowest and is also the longest. You won’t realize that this is an anthology film until the leads die off around the thirty minute mark and we go back to the message board. It’s a horrible revelation as you then have to watch everything you hated the past thirty minutes all over again. The second story is the strongest as we get the most detail behind what happens while the game is played, but the entire thing is ruined as the climax of this story is spoiled in the first story through an internet video. This should have started the film. The third story follows the author of “Lonely Girl”, which by this point we’ve been able to determine was killed while playing the game and, sure enough, she was killed while playing the game. Why is the story structured like this? It’s easily the worst possible way this film could have been organized. Despite being such a ripoff of “The Ring”, this movie doesn’t do the thing that film did best. There’s no tension built here at all. It’s one of the most predictable and least suspenseful horror films I’ve ever seen.

“Hide and Go Kill” is one of those rare movies that serves as a perfect illustration of everything that is wrong with the contemporary horror scene. It’s an uninspired rip-off of a far better, original film that came a decade late. The end product suggestions a lack of such basic film-making elements as story telling and pacing that make you question how it is that a film like this even got funding. Yet, there’s a sequel. So, if you think I’m upset now, check back next week when I tackle part two. For my sake, I’m hoping they learned some things between the two installments. But I’m not holding my breath.