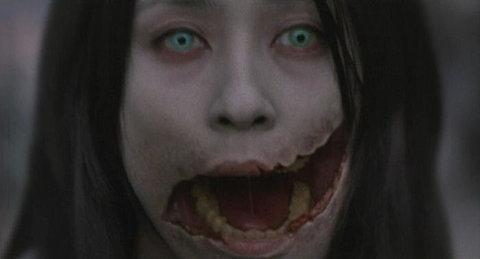 Although the film I'm reviewing is officially entitled "Carved" here in these United States of America, it's known in its native Japan as "A Slit Mouthed Woman", a moniker I happen to prefer over its overly-simplistic alternative. The original name gives the movie a bit more character, a mouthful of potentially offensive words that, in the wrong crowd, could elicit a few chuckles and, perhaps, a truckload of unwanted attention. Since most Americans tend to find sexual references in just about everything these days, you can't release a pictured called "A Slit Mouthed Woman" and have it taken seriously by the masses. Hence, we have "Carved", a mediocre title for a surprisingly competent flick.

At its core, "Grotesque" director Koji Shiraishi's occasionally unnerving shocker is nothing more than your average, run-of-the-mill "urban legend" picture, one that's been sprinkled generously with a fair amount of spooky atmosphere and gory violence. According to schoolyard rumors and overly gossipy children, the slit mouthed woman, armed with an enormous pair of scissors and a horrifying smile, appears in an isolated park at precisely five o'clock in the afternoon. If she catches you spying on her, there's a very strong possibility she's going to whisk you away to her secret lair with the red roof, so it's a good idea to play it safe.

Of course, the legends turn out to be frighteningly real, and a series of mysterious kidnappings begin to plague the area. The only individuals who believe that these abductions are being perpetrated by the notorious "slit mouthed woman" are two dedicated schoolteachers: the domestically abusive Kyoko Yamashita (Eriko Sato) and wishy-washy instructor Noboru Matsuzaki (Haruhiko Kato), the latter of whom may know more about this supernatural villain than he's letting on. As the adolescent body count begins to skyrocket, these questionable educators begin their desperate search for this otherworldly culprit.

Shiraishi's "A Slit Mouthed Woman" should not be confused with Takaaki Hashiguchi's erotic adaptation of this popular Japanese legend, unless, of course, you're just overwhelmingly interested in a soft-core adaptation of an admittedly nasty little story. Shiraishi seems to have a firm grasp of what makes this bizarre tale so impossibly eerie, and he's certainly not above dishing out some mean-spirited violence towards the film's bevy of pint-sized victims. This, of course, may not settle well with those who find cruelty against children utterly deplorable. Shiraishi pulls no punches when it comes to gore, adding a sinister layer to what could have been a seriously lackluster entry in the already-boated "urban legend" subgenre.

The only element that really worked my tender nerves during "A Slit Mouthed Woman" is the way this murderous spirit possesses her unwilling subjects. After experiencing a fatal wound of any kind, the lady in question magically floats through the air until she locates another body in which to inhabit. This is generally accompanied by a short period of respiratory discomfort, followed immediately by the appearance of a long, dirty coat and an enormous pair of rusty shears. This device is a tad too goofy for me to seriously consider, especially when its utilized several times in order to keep the story moving. A minor albeit irritating flaw.

In the expansive realm of Asian horror, "A Slit Mouthed Woman" certainly stands on its own misshapen pedestal, though the feature is not without its fair share of annoying issues. And even though the heroes play by the rules and follow the appropriate steps to vanquish this seemingly unstoppable evil, Shiraishi leaves the door wide open for a sequel. Imagine that. Still, the film's inexplicably creepy atmosphere, combined with the director's penchant for grisly violence, makes for an interesting viewing experience. It is, essentially, the Japanese "Candyman", which isn't necessarily a bad thing.