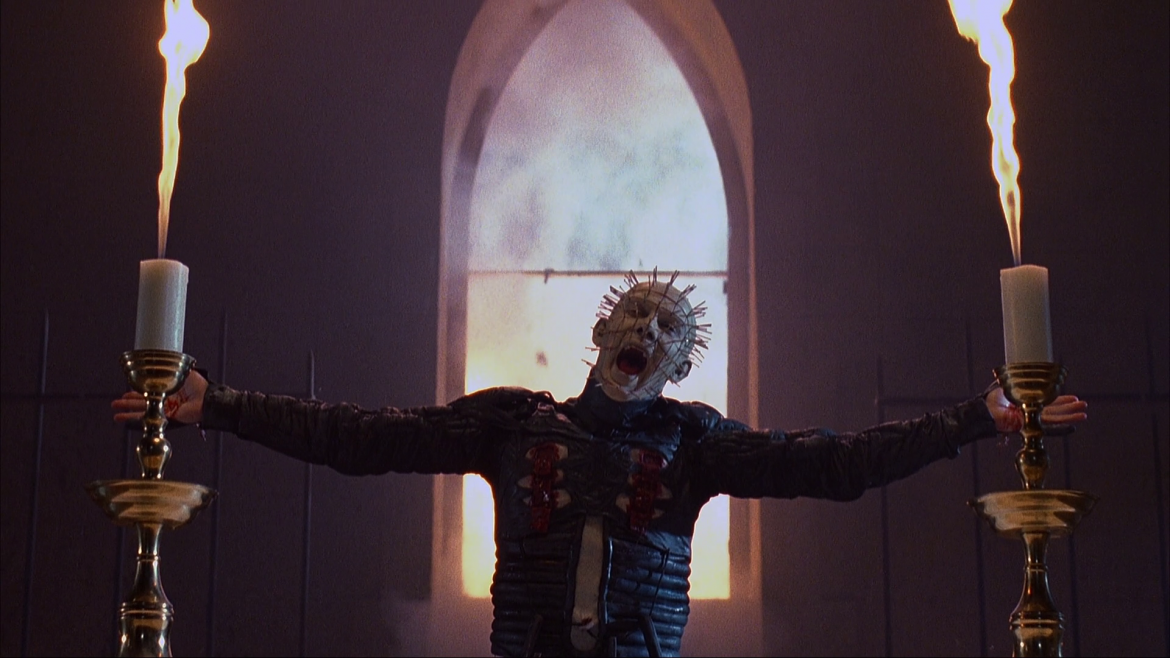 The biggest problem with Hellraiser 3 is that Pinhead isn't even in it, instead they've replaced him with Punhead.

Hellraiser 3 sees Joey (Terry Farrell), a reporter, stumbling into the story of a lifetime (oh jeez) as Pinhead (Doug Bradley) attempts to bring his particular form of pain (except not really) down to Earth, unfettered by the pesky puzzle box of the previous two films. Instead, he's luring Monroe (Kevin Bernhardt) with the promise of untold pleasures in order to escape from the stone pillar that he's somehow become encased in.

Hellrasier 3 doesn't actually feel like a Hellraiser film in the least. It's obvious that the filmmakers were intent on pushing the character of Pinhead as the center of the franchise, and they felt that the best way to do this was apparently to completely lose sight of what made the character interesting in the first two films and turn him into nothing more than a Freddy Krueger-esque jokester slasher. All the nuance surrounding the cenobites only coming when called upon is gone, and their sadomasochistic edge has been replaced with themed motifs. It was the early 90s after all, so of course we get the cenobite that kills people by throwing CDs at them, which act as saw blades, just like actual CDs do. Trust me, I've tried it.

It's also clear that there was an attempt to make the movie seem bigger than it actually has the ability to be. Pinhead kills a club full of people, but, where in previous films the kills were all rendered with gory care, here they look sloppy and pathetic. The low point is a showdown between the new cenobites and some police officers. It's either cringe worthy or laugh worthy, probably depending on how inebriated you are while watching. Worst apocalypse ever.

There are moments where it's possible to simply enjoy watching Doug Bradley have fun chewing up the scenery. At one point he follows Joey into a church, which leads to the most enjoyable moments. It's a shame their wasted in this film.

There's really not much here to redeem Hellraiser 3 in any manner, except possibly in the "so bad it's good" sense, but it's not even over the top enough in the right way to really be that. We're going to see films in the series that don't make use of the cenobites and the mythology as effectively as they could, but this may actually be the entry in the series that goes the farthest afield of the basic conceits of the franchise. It suffers for it, but not as much as the audience. Pinhead would be proud of that suffering. Punhead would just make a joke.